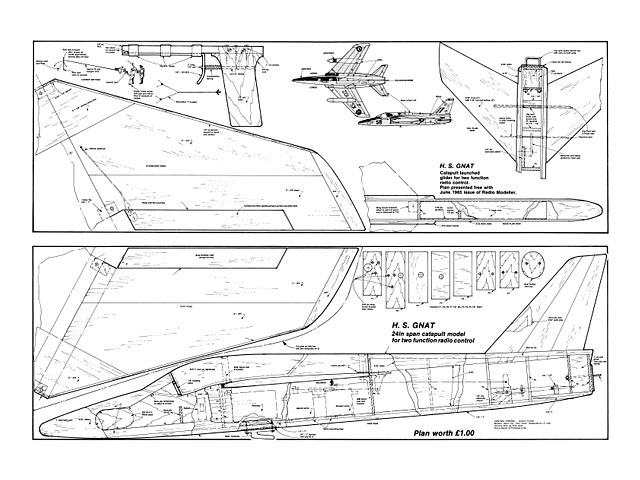 Quote: "Fast, fabulous, fun is name of the game in this exclusive new facet of R/C modelling.

BATH TIME REMAINS, for me at least, the most fertile period for new ideas and brainwaves -all connected with modelling of course. Diogenes might have yelled 'Eureka' when he found the soap - or was it some-thing to do with the displacement of water? For me the 'Eureka' comes when the germ of an idea begins to take a practical and interesting modelling form. From then on the thoughts race away, the bath water grows cold and it is only when a distant call reminds me that 'dinner is on the table' that I come to my senses and leave my own personal think tank.

So it was, a couple of months of Saturdays ago, that I had this 'bright' idea. Actually, it started off more as a reverie, remembering some of my modelling days of yore - and there's been plenty of those. I was idly wondering whether modelling was more fun in my younger days and, if so, why? Were there more challenges? Did we take success less for granted? Was there a better cameraderie between the modellers? All the sort of questions that the old fogey's generation of modellers muse about.

My mind wandered back to some of the antics we got up to, some, such as rocket powered models (with home made rockets) were distinctly illegal and positively dangerous. Vague memories drifted back of catapult gliders we used to make - and propel rapidly into the air with the aid of a substantial length of catapult rudder. Early attempts were fairly lethal as the models would, through the period of excess speed, describe one enormous loop and attempt to decapitate you at the end of it. As the models were constructed from 1/4 in plywood fuselages with rock hard balsa wings the dangers were not inconsiderable. Later developments consisted of a sprung trim tab fitted on the tailplane which would be deflected at high speed and gradually move up as the pressure on the tab reduced. This, in theory, allowed the model to climb straight and then have a reasonable glide path. Theory didn't always agree with practice and they could be tricky to trim out but, when correctly trimmed, they were great fun and amazing heights could be attained.

It was at this point that the revelation came! We have something called radio control these days, so why not return to the fun of catapault gliders and fit radio to make them go where you want?

Cat-a-list: Having sketched out a few likely contenders for the cat-a-jet models, and the list of suitable prototypes was quite extensive, I had to find a group of modelling enthusiasts willing to go along with this hare brained scheme. A call to Ian Peacock rapidly got him enthused and he felt certain that the Daventry Club had sufficient adventurous members to put together four of five of these models. Not only were they keen on the idea, they entered into the spirit to the extent of wanting to do some designing also. The 'Lightning' was one of the results, drawn and constructed by Bob Petrie. My sincere thanks to the lads from Daventry and to Ian Peacock for his persuasive powers - and excellent airbrush work. Without them the Cat-jet scheme would have remained submerged in the bath.

None but the brave: It would be wrong to try to give the impression that the Cat-Jets are super simple to fly. To achieve the flight pattern required, ie plenty of height from launch to give time to carry out interesting manoeuvres, does need some patience and perseverance. You must trim out the model correctly before you really start to haul back on the bungee for a high speed flight - initial acceleration is distinctly rapid with the bungee at full stretch. Test gliding down a sloping field - or from a normal slope soaring site - is strongly recommended. If you are launching from a relatively gentle slope you must give the model a fast, slightly nose down, launch. An 'airy fairy' launch will tell you nothing - give it the old 'heave-ho', but not skywards.

Flying Cat-Jets is one of those occasions where transmitter rate controls are positively helpful. If you think about it the reasons are obvious, the first part of the flight is at high speed - where control responses are extremely positive - and the last part of the flight is at a more sedate speed where larger control movements are an advantage. For those of you who do not have rate switches on the transmitter you must, obviously, have sufficient control movement for the model in its normal gliding state but be very delicate with the controls when the Cat-Jet is on the bungee.

Experimenting is all part of the fun, and challenge, with the Cat-Jets. What is presented here (and in next month's issue) is not intended to be the definitive form of catapult launched gliders. It will, we hope, whet your appetites sufficiently to want to have a go at this fun event and develop your own models and launch systems.

Our free design (HS Gnat) is one of the easier models to fly and would be equally at home on the slope. The prototype model was built by Mike Wilson, flown by brother Richard and father was responsible for constructing the release gun - a real family effort.

Release gun: Although initial test flights from the bungee can be carried out by holding the model by the fin for release, this is not recommended for more powerful bungee operation - you could end up with just a fin in your hand. The release gun, as shown on the free plan and in the photograph, has worked correctly on every occasion to date. Do give the pilot a countdown before releasing the model -he must really be 'on-the-button' at the moment of release.

Bungee: Initial experiments were carried out with a fairly hefty cotton covered bungee, with and without additional nylon line attached. Where monofila-ment line is used in addition to the bungee (recommended for 'strong' bungees) it should have a high breaking strain, say 100 lb. With a 50 lb line used initially the nylon often broke immediately prior to the launch - not good for the nerves.

Cotton covered bungees and square section rubber are somewhat fierce and, although not tested, the surgical tubing types are more likely to be superior for our purposes. The stretch is greater, the release of energy more progressive and the weight of the bungee less. One problem with the heavier bungees, when anchored to the ground with a spike, is that the bungee tends to drag along the ground and the 'lifting power' of the glider will not carry it clear. The alternative to spiking to the ground is to use a bungee anchor as used for ducted fan models, ie with a collapsible pole - see sketch on plans. Either a one pole or two pole system may be used.

Construction: Building the Gnat shouldn't present any difficulties to the moderately experienced modeller - if you are still at the trainer stage of building and flying R/C models you should not be trying your hand at Cat-Jets, they are for the competent pilots. There are just one or two points to watch.

(1) The rear 'U' shaped wire release point must be well anchored to the fuselage. As additional security you could tie the wire, via stranded control line cable, to a former at the front of the model.
(2) Control linkages must be precise, and 'slop' will give unwanted move-ments during the high speed phase of the flight.
(3) Balance points can be critical and these are best established at the test gliding stages. Err on the forward C of G position for initial flights. A release from the bungee followed by a stall and flat spin certainly denotes a rearward balance point, similarly if the model 'flicks' (with-out control movements from the transmitter) immediately after release.
(4) The batteries must be adequately secured in the fuselage, the high 'CV forces on release will move the batteries rearwards if they are not properly restrained. This also applies to the servos and receiver.

The prototype model 'Gnat' used a flat bottom wing section, and flew very well, so you have a choice of flat bottom or symmetrical wing aerofoil for this model. Although the construction photo-graphs show the BAe Hawk (to be featured next month) the same system of building is used for the Gnat.

Safety: All R/C models are potentially dangerous and this is equally true of Cat-Jets. The release speed is high and could cause considerable injury to anyone unfortunate enough to be in the path of the trajectory. DO MAKE CERTAIN that there is no one standing in front, or immediately to the sides, of the launch area before releasing the model.

Apart from this vital warning do go out and have fun, you will probably have a few crashes - particularly when you get to the over confident stage - but they are relatively inexpensive and can be easily repaired." 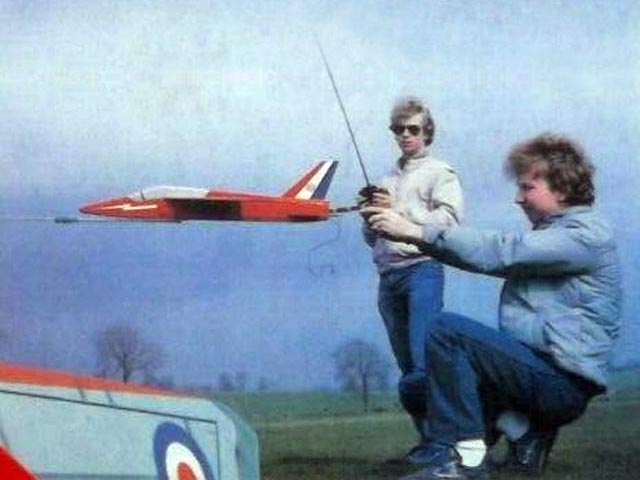