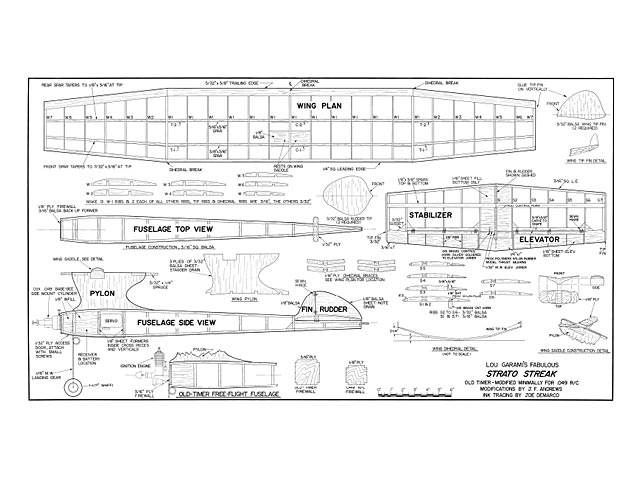 The Lou Garami Strato Streak (oz67) design first appeared in Air Trails, Dec 1941. This here is a later version modified for RC in 1982.

Quote: "A real winner in 1941, this lovely little ship has since been flown all around the world by the author! For 1/2A FF or RC, it's a guaranteed good Old-Timer wherever you are. Strato Streak by JF Andrews.

ONE OF THE MOST prolific pre-WW II designers of airplanes was New York's Lou Garami. Known mostly for his small-engined airplanes, using Atom .098 cu in engines and slide-out engine-and-ignition-unit trays, his ships continue to dominate today's contests because of their simplicity, ease of adjustment, and compact size.

My favorite of all Lou's designs is the 1941 Strato-Streak. This little (44 in span) ship, with its distinctive triple tail fins and wing tip plates, was years ahead of its contemporaries. Weighted down with a complete ignition system and super-heavy Atom engines, its spiraling corkscrew climb and rapid recovery from engine-run attitude to a searching slow glide when the engine quit made it a formidable opponent in its day. These same characteristics make it a threat in today's Old-Timer contests as well.

The model as presented here is shown modified for the installation of two-channel radio gear. However, if you wish to build it as a Free Flight ship, merely omit the hinges and control surfaces. The only other modification made was to move the engine forward by the addition of one bay to the fuselage sides, to help it balance with the lightweight modern glow-plug engine used. If an ignition engine is planned, then omit this one extra nose section, and the model will be exactly as originally designed. Wood sizes, spars, rib locations, and airfoils are all as shown on the original drawings, as intended by the writers of the SAM (Society of Antique Modelers) pre-amble.

My work takes me all over the world, and when I do get a chance to fly models, it is usually out of small and/or overgrown fields, so the ship pictured was modified for RC. It's the third Streak I've built so far. It has been a ship I can take out of its traveling case (an old shipping carton from Sig) and have in the air within 15 minutes. The Cox Babe-Bee is mounted on its side, mainly to keep gunk from spraying the top of the fuselage. Fuel and acessories for this engine are available any-where in the world that there are model airplanes.

One particular flight stands out in my memory. I had a little time to kill in Whangarei, about 60 miles north of Auckland, New Zealand, but couldn't go too far from the dock. (I'm a helicopter pilot for a tuna boat, and we were scheduled to leave shortly after noon.) There was an auto race track not far from the boat, so I cranked up my faithful Streak there.

The first two flights were about normal - a three-minute engine run and then bounce around in light lift for about 15 minutes before landing. I played a little waiting game before launching for the third flight, feeling that there was more lift around than I had been finding. This waiting period ( about 15 minutes) really paid off.

This little airplane has a trait of rocking its wings very noticeably as it goes through lift, and this time it started to rock around almost as soon as I had released it! By the time the engine shut down, I could just barely make out that it was a red airplane. There was virtually no wind at the altitude the airplane was gliding, and it only drifted about a quarter mile from the launch point in the next 45 minutes.

The memorable part of the flight was that sea-birds, trying to figure out what strange kind of a new bird had invaded their territory, would come over by the ones and twos to check out the Streak. Each time a new bird would join us, I would break out of the normal wide right circle and fly toward the birds, then turn around and center the Streak in the thermal again. The birds, still trying to identify this intruder, would follow me into the thermal and then start circling in it themselves. By the time the Streak had drifted out over the bay and I had to break away and return it to the field, we had (by count) 22 birds circling around the model enjoying the plentiful lift but still puzzled about the identity of their benefactor.

The Streak also has served as a trainer for a number of bystanders and relatives who asked (or were coerced) into trying it. Its small size makes it fairly responsive..." 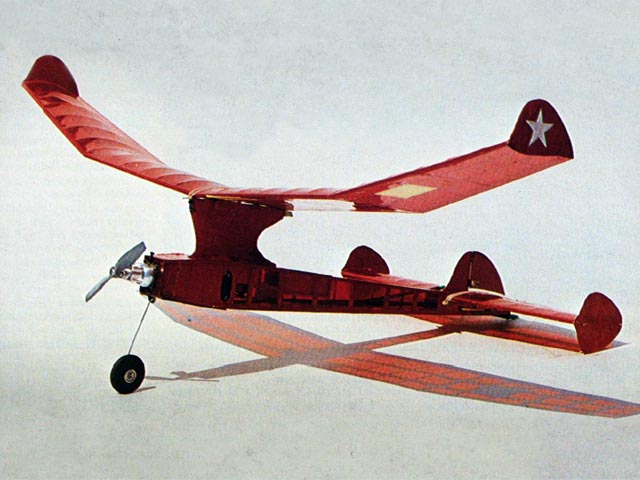