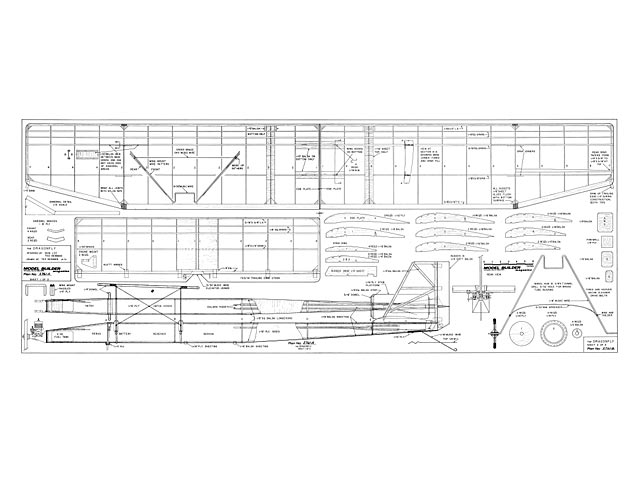 Quote: "Want to get your young son or reluctant wife at the controls without developing an ulcer? Here's a try-it-you'll-like-it R/C model for doubting Thomases and raw beginners. Anyone can fly it! Dragonfly, by Tex Newman.

It seems we had just finished one of those fine dinners Mary Ann Lee cooks up, and continued to stuff ourselves with apple pie and ice cream, when Bob picked up a little stick fuselage rubber model and gave it a toss. It obediently floated across the family room and landed on the shelf where it lives between flying sessions.

What we need is an R/C that flies like that! I can't remember who said it first, but at any rate, a couple of weeks later we were out test flying our new 'Dragonflys'. Since then there have been a dozen built and flown with a wide variety of engines and radios. The original pair were powered with .047 diesel engines and flown single channel. They have been powered with .074 OK Cubs and McCoy .098.

When the decision was made to go to OS Max 10s, a whole new thing happened! They really didn't fly any faster, but just climbed like an elevator - in second gear. Consequently, we could make low, level, slow speed (5 mph) passes and climb back up out of sight. The eventual addition of elevators added funny loops to the list of aerobatics which already included wing-overs, hammer-head turns, and spins.

Dragonflys have flown with Ace pulse system, rudder-only quite success-fully. Mine, one of the original two, is still flying with a seven channel Kraft system - operating just rudder and throttle. The left stick on my transmitter is for rent!

As a beginner airplane, the Dragonfly just can't be beat. The novice can learn which way is left - both coming and going. Also, where he is over the ground as well as how to use just a little pressure on the stick, all in a short time. This approach to R/C flying provides the beginner with a large amount of success in a short period of time with minimum repairs.

Up until a year ago there was a large open field just two houses up the street from my house. The neighborhood kids would all turn out for a flying session. We'd take off and circle the field to gain altitude, then walk back to the front yard and lay in the grass while each one took a turn to fly for a while.

On one such summer evening, I was sitting in a chair on my drive way, flying, when a police cruiser passed ominously down the street. The driver looked first at me, than out his window at the sky, then back at me again. He turned around at the corner and came back and parked in the driveway. What are you doing? Flying an airplane. I said. That's what I thought. Where is it? Up there, over head, ah, would you like to fly it? Oh no, I'd probably crash it! Not this one! It's real easy, my wife even flies it. Come on - and so he did, for five minutes or more, asking lots of questions. Finally he said, I hate to do it, but I've got to get back to work. Have a nice evening. Phew!

Enough of this, I could tell stories all night, but you'll enjoy flying your own Dragonfly and having your own fun more than reading. So let's get to work. First of all, call up your old flying buddy and build a pair. They are ten times more fun in pairs. Besides, a 12 x 48 inch sheet of 1/16 plywood makes four fuselage sides and all the other little plywood pieces needed for two.

FUSE LAGE: Cut out two fuselage sides. Glue on the 1/8 square longerons, making one left and one right side. Add bulkheads A, B and C and pin in place over the top view. Note where the 1/16 plywood sheeting goes on the bottom to reinforce the wing and landing gear mounts. Draw the nose together with the fire-wall and add nose plywood sheeting. Bulkheads D and E are put in after the filler block at the tail. Install the tail skid between pieces of 1/16 plywood and cross-sheet the remainder of the fuselage bottom with 1/16 balsa. The top may be sheeted after the push rods have been installed.

FLYING SURFACES: The wing and stab are very conventional in construction. The wing is built in two sections and joined with two 6 inch pieces of 3/32 music wire. These slide into 1/8 inch OD brass tubes sandwiched between the main spars. The panels are held together with hooks and rubber bands on the bottom surface. This allows the plane to be trans-ported in a Volkswagen, and provides flexing on landings when the wheels first hit something other than the ground. The one thing to remember is the 1/4 inch shim under each wing tip trailing edge during construction. This provides tip washout and helps make stalls enjoyable. Wing rib No. 3 has 1/16 balsa sheeting on top to support the wing hold down bands.

Build the rudder from 1/4 inch square balsa and cover it before mount-ing in the slot provided in the top of the stabilizer.

Update 14/10/2020: Replaced this plan with a clearer copy thanks to AdrianCulf, scanned from fullsize, with cleanup by Circlip. 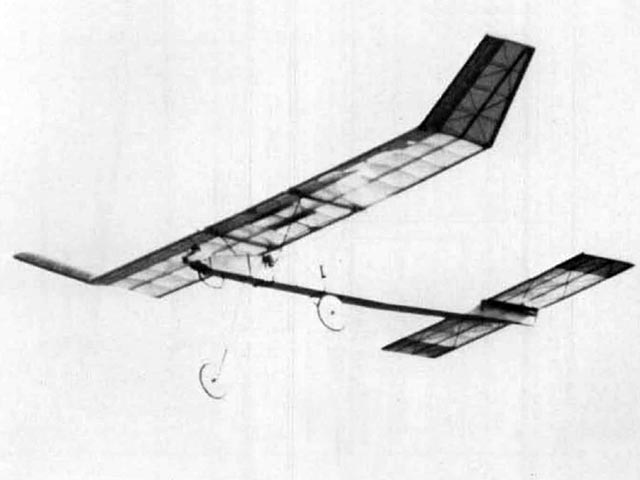