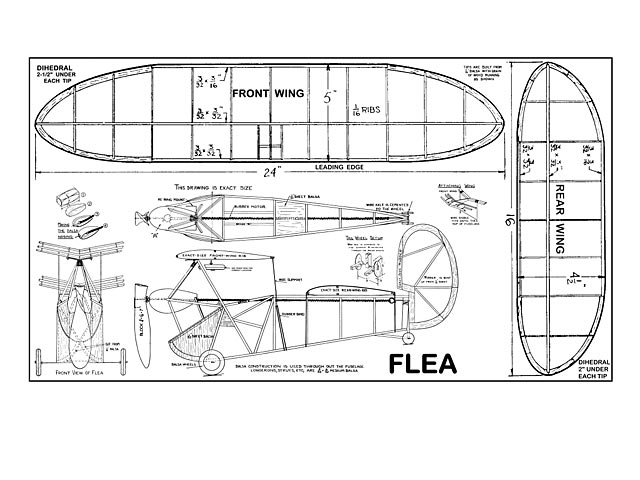 Quote: "MY first view of the Flying Flea was in a hangar at Roosevelt Field, where it was nestled under the wing of a neighboring monoplane. The 19 foot wing of the Flea would seem small under any conditions, but such a direct comparison to the large-size airplane made it seem even smaller than it really is. It seemed as though it was just a model that could be picked up and glided like any other model airplane. A closer inspection showed that despite its midget proportions, the Flea is rugged and airworthy.

One notices at first glance the outstanding difference between the Flea and the conventional airplane. It is the use of two large wings instead of the usual tail and wing. This theory of tandem wings is one that every modeler should thoroughly investigate. The Flea startled the aviation world with a successful application of this idea. A successful tandem wing contest model would have the same effect on the model world.

A tandem wing model will have the benefit of a much lighter wing loading and still be eligible for contests. The weight required will be determined by the area of the main wing. In other words, the Flea, according to NAA rules, would be required to weigh only 1.88 ounces, since the area of the front wing is 94 square inches. This is at the official rate of one ounce for every 50 square inches. But the rear wing adds 59 square inches more of lifting area that does not have to carry additional weight. This would give the tandem wing model a distinct advantage.

By careful designing, however, we could cut down the distance between the wing and tail. A step in this direction was the Sockdolager in the November issue. This model had a coupling length of 31 per cent of the span and a tail area of 30 per cent of the main wing area. This model was stable under all flight conditions and gave an excellent account of itself in duration flying. But a truly tandem wing model would be one with a rear wing of at least 50 per cent of the main wing area. Experiments along these lines would be a great deal of aeronautical fun.

IN BUILDING the model of the Flea, the general outline and characteristics were followed. Wherever possible, the exact dimensions were scaled down. The scale of our model is about 1-1/4 in to the foot, or a little over one-tenth of the size of the real plane. But several modifications of design were necessary in order to make the model flyable. The value of making these changes was shown by the splendid performance of our Flea. It proved to be an airworthy model - one that can he truthfully called a flying model.

The duration was short, since the rubber length is only 11 inches. By using a winder, however, we managed to store enough turns in the short motor to get 30-second flights. And what flights they were! Steep climb, half a dozen circles at 25 to 30 foot altitudes, and a smooth glide back to earth with a dead motor.

One point of design which has a serious effect on the flying qualities is the upturned trailing edge of the wings. In both rib shapes - front and rear wing – you’ll notice that the rear tip of the rib is turned tip. By shaping the ribs in this fashion you can save the Flea from the life of stalls and dives that it would experience with the ordinary flat-bottomed rib shape, and make stable flights possible.

The characteristics of the Flea are such that 18/100ths ounces of lead had to be added to the nose of the model to balance it. This brought the total weight to 1.25 ounces. However, this makes the wing loading only 1 ounce for every 123 square inches of area. This is still a light loading. So if someone can design a contest version of the Flea, they'll have the advantage of light wing loading. On the other hand, they'll have trouble in getting a rubber motor of sufficient length to keep the propeller turning for a competitive length of time.

But before we think too far ahead of making a contest model, let's build this original version of the Flea and see what success we have. The construction is not difficult. Little material is required. So let's go.

CONSTRUCTION: The Flea has been drawn full size. Study the five drawings until you have a clear idea of what is required. Drawings #1 and #2 should be joined together to form a complete fuselage layout. The fuselage should be built first. Balsa 3/32 x 3/32 is used throughout. In making the fuselage, you can work directly from the drawing. That is, shape your wood the size it's shown in the full-size drawing. 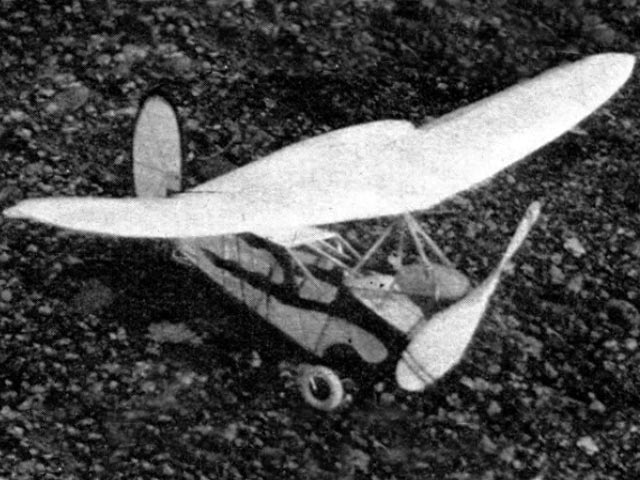