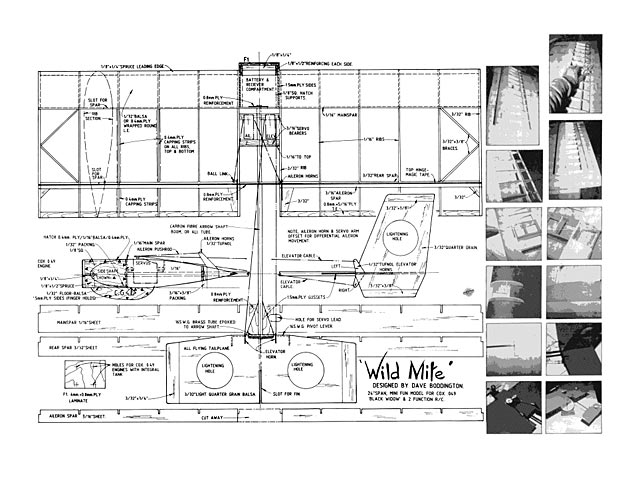 SOME OF YOU may have seen my 'Wild Thing' design in the March issue of RCM&E. I also designed a smaller, twin boom, version of 36 in wing span for '20' sized engines - it really moves. Just before Christmas the notion came to me to shrink it again to see whether the fun quotient would remain with an even smaller version of these 'wild' machines. A Cox .049 seemed a logical engine for the 'Wild Mite' as if has an integral tank and simple radial mounting. Using the standard mini servos - if that isn't a contradiction at terms - there is sufficient room remaining to fit a 150 or 250 mAh battery pack (depending on the shape) with a mini receiver over. Because the prototype was slightly tall heavy I have increased the nose length.

My previous two 'Wild Things' differed from the 'Mite' in having twin booms and with a coupled central wing flap and elevator. With 'junior' I wanted to keep everything as simple as possible so I opted for a single boom, using a carbon fibre arrow shaft, and an all flying tail-plane - the fin moves with the tailplane. Two function miniature R/C equipment (HITEC in my case) is both reliable and inexpensive and the complete model is likely to give you more fun per pound than almost any radio product.

You could, if you wished, use three or four function radio by incorporating rudder and engine throttle. If rudder is included I would suggest using a heavy duty ball link at the end of the boom with the tail surfaces connected to the link. This will give movement of the tall surface in all directions. Obviously, the centre rib spacings will be increased to accommodate the extra servos.

However, the 'Wild Mite' flies very happily with aileron and elevator control so simple, in this case, is probably best. Also In the interests of simplicity I dispense with a receiver switch; the top hatch Is opened, the 150 mAh battery plug inserted directly into the receiver, the hatch closed and the model is ready for starting.

Models of the 'Wild Thing' layout are often launched control-line style by one wing tip or by holding each wing tip, above the head, and launching forward. For those of you preferring a more conventional and sedate launch - for the first flight at least - I have included 1.5mm (1/16 in) plywood skids extending below the wing, at the balance point, for a hand grip. Omit these, terminating the plywood at the underside wing position, if you are going for the extrovert launches.

Construction: The wing has a thick section and when completed gives a very. rigid structure, it must be built true in the first place. Construction is by the 'egg crate' system using slotted main. rear and aileron spars. The main spar is packed up 1/32 in over the building board and the aileron spar by 3/8 in. Note that the 3/32 rear spar extends all the way down to the building board (to give a positive structure during building) and is cut away after the framework is removed from the board. Glue 0.8mm ply reinforcing to spars and drill for the boom lifting.

Wing and aileron are constructed as one and parted later. With the spars pinned in position over the building board add the ribs, checking they are vertical. Glue in position the leading and trailing edges, looking from the end to check for straight line accuracy. Drill the servo bearers for the servo screws and glue to 3/32 root ribs. Glue braces and gussets in place. Leave the assembly to dry thoroughly and then remove from the building board.

Mark the centre line on a piece of 1/32 balsa 24 in long and 4-3/4 in wide (grain lengthwise) and glue the centre to the wing leading edge. The balsa wood is then wrapped and glued over the rib nosings to the main spar position; be sure not to twist the wing during this operation. 0.4mm x 1/18 in capping strips are glued in position from the leading edge sheeting to the rear spar and from the aileron spar to the rear of the trailing edge..." 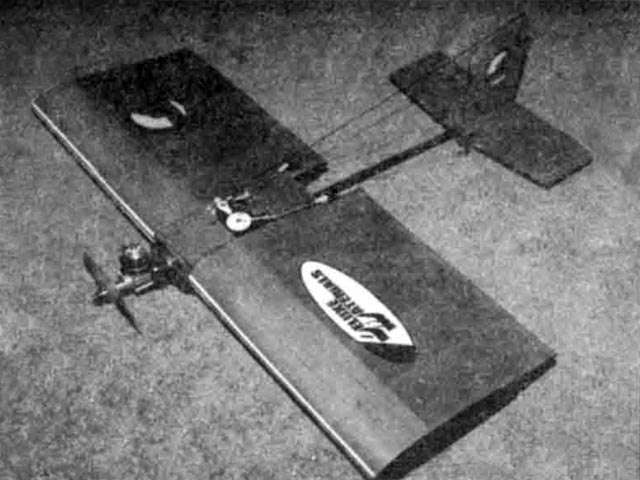