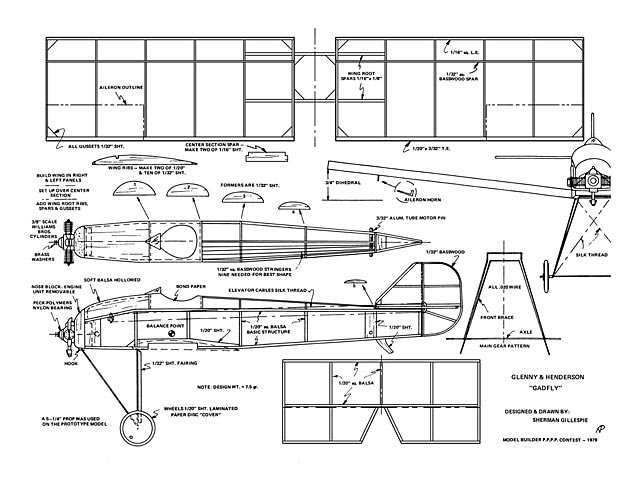 Note Sherman Gillespie had an 18 inch Gadfly (oz2475) - which is referenced in this article - first published in MAN April 1955. This here is a later, smaller version, at Peanut scale, for MB in 1981.

The Gadfly is one of those obscure, light aircraft that has always appealed to the sport flier, both the pilot of full scale airplanes and the model builder. It would make a fascinating project for the homebuilder if the plans were available today!

Built in England in 1929 by AP Glenny and Lt Col GLP Henderson, and designed by Capt. K.N. Pearson, it had a wingspan of 25'-10", was 7'-10"in length, and had an empty weight of 455 lbs. with a disposable load of 295 lbs. Fitted with a 40 hp ABC Scorpion engine, it was quite a performer with a listed top speed of 91 mph, a cruising speed of 72, and a landing speed of 45. An advertisement for the little machine in the August 15, 1929 issue of Flight magazine stated that it held the World’s Height Record for Single Seater Light Aeroplanes, 4th category (under 200 kilos) at 3021 metres.

The decision to build the model for the 1979 Model Builder Proxy Peanut Contest was based on several years of very successful flying of an 18-inch semi-scale version and the clear knowledge that it was not a commonly seen aircraft. The decision turned out to be a happy one, for the Gadfly earned top static and flight points in the Golden Age category and was named 'Grand Peanut.'

Construction is rather conventional, as the saying goes, and certainly poses no problems for the experienced builder. For modelers who have not built ships for indoor flying, the old advice 'think light' works very well. The finished model weighed 7.5 grams, which is probably a good weight to shoot for. Study the plans and the photos, read through the article, gather the necessary materials, and enjoy some pleasant building!

The fuselage sides are built in standard fashion over the plans. If building one side on top of the other for accuracy, use plastic wrap or wax paper between the first dry side and the second to avoid separation difficulties. Square structure is vital with the Gadfly if the wing mounting is to be true. Patience here will help to avoid alignment problems later.

When setting the finished fuselage sides up over the top view, block them up square with the building board and fit the cross pieces carefully. This will be very important through the cockpit section.

All formers are cut from 1/32 sheet balsa and are not notched. The 1/32 basswood stringers are butt-glued against formers number 2 and 5, and rest on top of the others. A small spot of glue will hold them in place. Balsa stringers may be used if desired, but basswood can be sanded very thin and still be quite strong.

The cowling between the nose block and the cockpit is shaped from soft balsa and hollowed as indicated. It is perhaps best to do the finish sanding after the nose-block engine section is fitted to assure a smooth contour. Before gluing on the bond paper cockpit cowling during the covering of the fuselage, an instrument panel should be cemented in place, if one is desired. Instruments possibly included tachometer, oil pressure, oil temperature, fuel, airspeed, altimeter, and of course, magneto switches. Also, a bond paper cockpit floor can be fitted..." 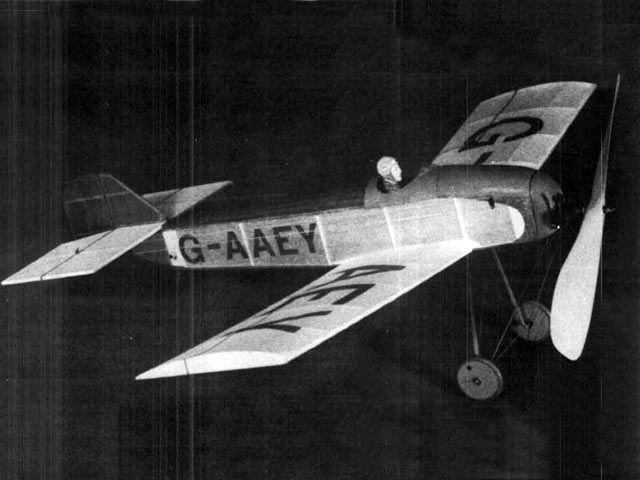 I have built two of these. In my 60 years of model building, this particular model is the all time best flying sport rubber model I have ever had. No trimming, flies right off the building board!
Rufus Carswell Sr. - 07/09/2020
Add a comment