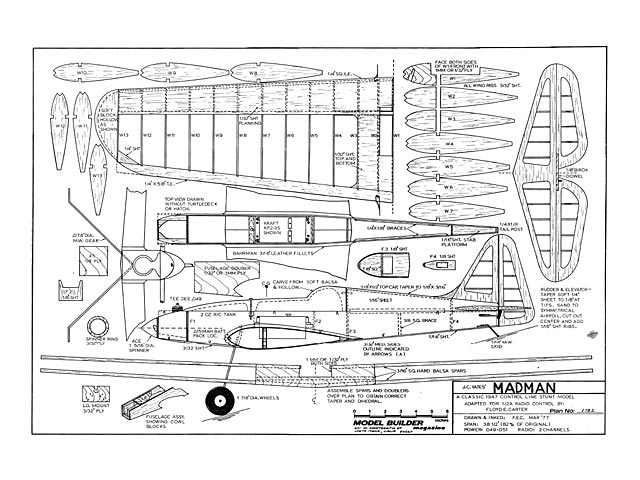 The peacetime economy of 1946 brought a sudden increase in the availability of consumer goods, after a decade of economic depression, which was followed by another four years of severe rationing and wartime priorities. Many small companies found their government contracts ended, so they were eager to switch their production lines from military hardware to candy bars, washing machines, and model supplies. Engines, balsa wood, and other materials once again appeared on the shelves of hobby shops. Former modelers found their way back into the hobby, along with countless others whose aviation interests were triggered by the recent air warfare.

Control line flying had been introduced only shortly before the war, and little development had since taken place. Without much of a background for guidance, modelers invented, developed and refined the control line stunt pattern while striving to design the optimum stunt machine. Planes of all shapes and sizes appeared at flying fields and in kits, only to become obsolete and outclassed within a very short time.

Along with the mainstream of design philosophy which gradually took shape, my own models of the time imitated the large 'barn door' designs powered by the magnificent new Orwick 64 engines. Size and lots of wing area were considered necessary to carry the heavy engine and its ignition system.

In the midst of this trend, one can imagine the skepticism that greeted the Madman. Here was a very handsome model which resembled, but did not imitate, the sleek fighter planes of the time. On the other hand, it seemed almost too small to be competitive with the big, lightly-loaded planes that were popular.

The designer of this new model was a young man named JC Yates. And he quietly began to show the rest of us what a winning combination could do. When the smoke finally cleared, he had earned 37 trophies to prove that the Madman was indeed a capable machine. This performance was not lost on the competition. The Madman kit was soon introduced and became the standard stunt machine for serious contest flying. It wasn't long after this that glo plug engines were introduced. These permitted smaller, lighter planes with wing flaps. The Orwick engine faded from the stunt scene, and the Madman became another casualty of progress.

During his practice sessions with the Madman, JC (yes, that is his full, given name) developed what became known as the 'Yates Takeoff'. With full up elevator at takeoff, the Madman could roll a few inches and then half-loop to inverted flight. Modern control line combat machines will do this, but JC was the first to do it (but not in contests). That kind of flying was possible because of the brute power of that big Orwick, which would swing a 12 x 6 prop without any thought of slowing down, regardless of the attitude of the airplane. That kind of flying also earned JC the nickname 'Madman Yates', which was coined by Johnny Davis in the model press.

After his Nats win in 1948, JC retired from control line stunt competition. He is now an R/C enthusiast and regularly flies at his home field in Southern California. JC still has a Madman or two that he takes out occasionally to brush up on his U/C pattern technique. Except for the wires attached to the wing, it could easily pass muster side by side with modern R/C models on the flight line. Such is the nature of a classic design. It never seems to look dated or out of place.

To get the Madman down to 1/2A size, it was necessary to reduce the plans only 18%. The same basic method of construction is retained, but the fuselage had to be widened a bit to make room for the 2-channel radio (The original model had a straight taper from the firewall to the tail post). If you use one of the small radios now available, the fuselage can be staightened out as on the original Madman. Other than this, the Madman is an exact reduction and was scaled photographically..." 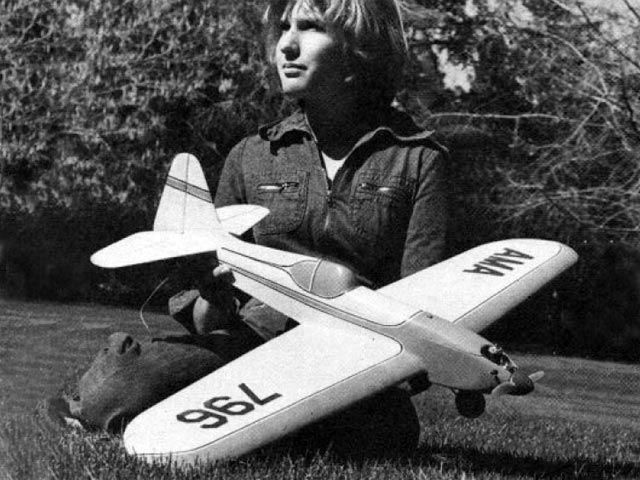