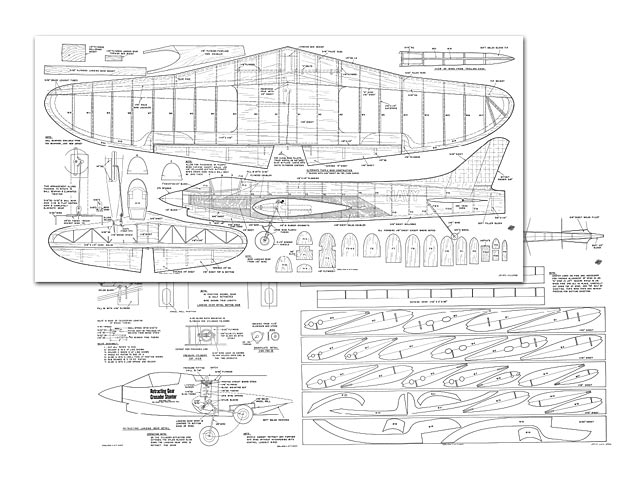 Quote: "Retracting Gear Crusader Stunter, by Harold L Price. Ladies! Received a box of candy AND a bouquet from your spouse lately - no? lf he is a serious control line stunt flyer who dreams of a retracting-gear entry, maybe you'd better read about this winner that, for once, doesn't look like a Nobler!

Your stunt model rolls along the blacktop runway, its tail lifts off, then the plane slowly climbs to level flight. That is the way it has been for as long as I have flown. But now the story is changed! No longer are those two-level laps something for the spectator to ignore. When your Crusader takes off everyone watches those initial level laps to see the retracting gear operate.

Our Crusader was developed as a semi-scale stunt with wing and stabilizer design based on my Valkyrie series. The jet fighter profile was added to provide the fuselage space needed for the retracting gear mech-anism. Since most of the design refinement came during the time I was flying my Valkyrie, what you see here is the correlation of the three years development in both models.

With his Nobler (oz6212) at the 1951 Plymouth meet George Aldrich made a profound impression on stunt model design. Until then it was considered hard for a Ukie weighing 48 ounces to fly - let alone do a winning stunt pattern! George's contribution to stunt design is evident in 98% of today's competition models. To the untutored observer, all appear to be Noblers!

For the past twelve years, little consideration went to much but conventional tapered wing, with its fifteen to twenty percent maximum thickness at thirty percent chord. These offer great performance, so why change? However, no matter how you slice it, the wings all look ex-actly the same. With this in mind I began looking for a new concept in wing profile.

Recently many interesting ideas have been advanced by radio control builders concerning the characteristics necessary for a wing when flying at slow speeds. Actually, all of these problems can be related to control line stunt. What both groups are looking for is a wing which has good wind penetration, plus excellent lateral stability which will give a plane good turning ability. I don't mean to say that this wing will solve all these problems, but it does go a step in the right direction. The liberal sweep back in the leading edge guarantees good wind penetration and low wing tip area improves lateral stability. A 22% airfoil along with a well rounded leading edge makes this a wing which has excellent low speed turning ability without sacrificing smoothness.

My first attempt at building the wing was incorporated in Valkyrie I. The wing area of over 600 square inches put it in the big stunt class. With a sporty yellow finish this model weighed in at 47 ounces. First flights showed its many good qualities and some bad tendencies. However, testing indicated that the bad tendencies came from a few degrees of dehidral and a pronounced twist I had built into the trailing edge. By spiking the trailing edge and twisting it I was able to correct most of the problems. After many practice flights I felt we were ready to try the Valkyrie against top notch competition.

I was pretty upset when at its first meet I was asked if it was a modified Nobler. Valkyrie placed third in its first two meets and then at the 1961 Mirror Meet won first by a one point margin with a 663 score. So that day I bought my wife a box of candy and a bouquet of flowers.

With the 1961 Willow Grove, Pa Nationals in mind I began construction on a second Valkyrie. This time wing was constructed on a board in-stead of 'up in the air'. This was in a simple jig of one inch sq blocks of balsa pinned down to the board. By drawing center lines on the ribs I was able to tell when the ribs were properly set up. With top and bottom sheeting glued on, you get a good wing. For two feverish months I worked on that new model. Its wings were covered with jap tissue, a new built-up stab was included. The combination gave me a three ounce lighter model, a mere 44 ounces.

The job was completed just two weeks before the Nats and I was all smiles when I brought it out to Rich's Hobbytowne for test flights. After a successful first hop, on the second I was practicing wingovers after the pattern when the push-rod snapped. The plane dove in just as I was about to pull out of a wing-over. Buried 4 inches in the ground it had to be pulled out like a javelin. Because of a recent rain the soft turf had cushioned the impact to a great extent. This plus good sturdy construction had saved her. The spinner had hit a rock a couple of inches into the ground and was crushed in on one side. As the spinner crushed, the bolts sheered taking most of the shock.

Nats' qualifying flights were flown in excellent whether and I ended the day tied with Lew McFarland for the high score in the circle. I had an idea he was the man to beat, so for the finals I watched his practice flights and made sure I would fly my flight right after his. Lew's first official was well along when he suddenly left out a couple of maneuvers. This put all the pressure on his second flight. My first attempt was not up to that of the day before so I, too, would have to depend on my second go-round..." 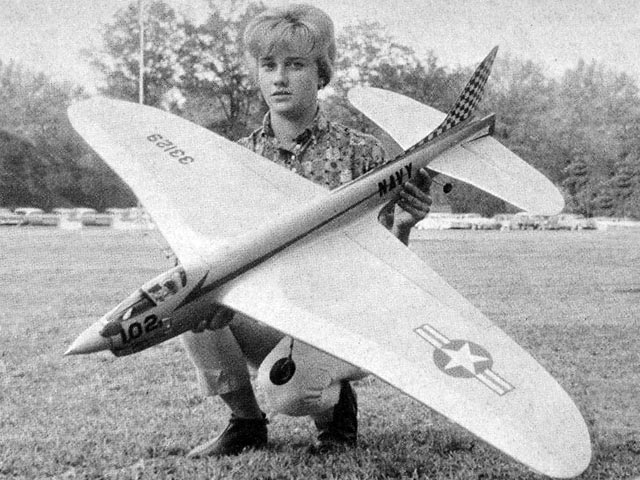 Thank you for the complete article. The previous version had the gap right where the reading became interesting :)
Hubert - 06/09/2020
Add a comment