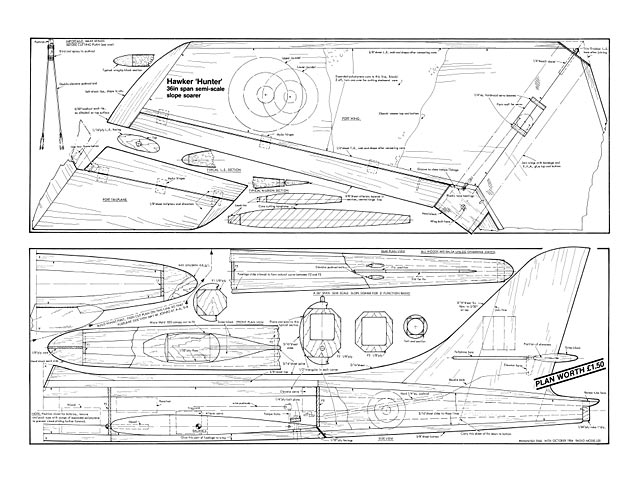 Surely the Hawker Hunter was the last of the line of 'beautiful' military fighting aircraft? Ancestory of the Hunter can be positively traced through the Sydney Camm designs of the 30's biplane designs (Hind, Hart, Demon, etc) and the even more famous Hurricane. Modern jet fighters and trainers do not feature the same classic lines and proportions of the Hunter - it is subject which will for ever be a favourite with modellers.

Semi-scale models of jet powered prototypes lend themselves very well to slope soaring activities. The clean lines and lack of inherent drag with designs such as the Hunter make for efficient gliders that can be flown in a reasonable variation of wind conditions. Keeping the models to modest dimensions produces a slope soarer that is easily transportble - without dismantling - and economic to build. Two function radio (elevator and ailerons) is all that is required for control of the Hunter, although the use of a 225mAh ni-cad battery and minature servos will make the radio installation a little more easy.

Some liberties have been taken with the outline and proportions of the prototype. It would be possible to make a true scale Hunter, but it certainly would not perform as well as Harold Bull's version of the aeroplane. Even with the modifications there is no doubting the model has the authentic appearance of the Hunter. Listening to the comments of fellow soarers, as Harold flew the model, confirmed the opinion that here is a design which will appeal to many slope enthusiasts. The combination of attractive appearance and excellent flying characteristics certainly produced a lot of complimentary remarks - yours will be equally admired.

Juggling with balance: How many slope soarers require a hefty chunk of lead in the nose before the correct balance is achieved? Certainly the majority of designs. With this thought in mind Harold Bull extended the nose of the Hunter considerably to eliminate unnecessary ballast problems. The completed model provided a few surprises; the battery and elevator servo had to be repositioned rearwards, and weight added to the tailplane, to counteract a nose-heavy condition!

Revisions to the plan, as presented here, include the wings moved slightly more forward to ease this situation. However, it does not follow that you should use rock-hard balsawood for the tail, surfaces, this could reverse the problems again. Harold incorporated a removable cockpit canopy for access to the battery and elevator servo (in its original position). By installing the elevator servo at the rear of the wing housing, the receiver at the front of the housing and the battery just forward of former F2 it should be possible to eliminate this hatch. The wings

Words fail - See diagram: Assuming that you can read a drawing there is little point in going into a wordy explanation of how to build the Hunter. Construction is very basic and should be obvious to anyone who has assembled a couple of models. If you are contemplating building the Hunter as a first model the oft repeated advice is applicable - don't! Start off with a simple training slope soarer and progress from there.

Fuselage formers on the prototype model were simply rectangular in shape, with the 1/2 in triangular pieces abutting them. Although this was satisfactory in a structural sense it made the external carving and sanding of the fuselage section difficult. Careful use of a sanding block did not prevent the plywood formers tending to finish proud of the surrounding balsawood. Using full length 1/2 in triangular strips, and the formers as shown on the drawing obviates the problem. Note that the triangular fillet is tapered to 1/4 in to the rear of the fuselage. A Micro-Mold canopy type E-V33 was fitted to the original model, this is probably as close as you are likely to get to the genuine shape with a commercial canopy.

The tail surfaces are all from sheet, taper the 3/16in. sheet fin, from the tailplane seating, to 3/32in. at the top of the fin. As the fin base is very extended, with ample glueing area, it is not necessary to reinforce the fuselage/fin joint - the fin can be slotted into the [...incomplete]

Veneered foam wings are indicated on the drawings and this is the most practical method of producing the wings. Attempting to construct them in a conventional manner (open framework covered with 1/16 balsa sheet) would be difficult, particularly with the 3/32 in washout incorporated in the panels. If you really are unable to get a pair of foam cores cut - and there must be someone within hotwire distance - an alternative would be to use extra soft 1 in balsa sheet and retain harder leading edges, tips and ailerons. Cover the assembly in lightweight glass cloth and resin.

Adding the sparkle: 'Subject for scale' this month features the Hawker Hunter so there are no excuses about lack of information on colour schemes and markings. Harold, as is his wont, finished the model in the 'Blue Diamond's' colours - his previous Hunter models (powered) have also been decorated in this colour scheme. The advantage of having a 'single' colour scheme is that you can use Solarfilm as the basic covering, Whether you can apply the material as neatly as Harold is another matter - he really is a wizard with the iron.

Use the length of the nose for making adjustments to the battery position and the balance point. Once you have achieved the correct balance firmly secure the battery with pieces of polystyrene foam. Fix a cord loop to the battery so that it can be extricated without having to shake the fuselage like a 'piggy bank'.

How much movement you can use on the control surfaces will depend on the type of flying you wish to perform. Set as indicated on the plan will give you an aerobatic Hunter with a fast roll rate. Don't reduce the movements too much, there are times when you need to change direction rapidly - better to learn to fly with a sensitive touch. Harold used top hingeing to the ailerons and elevator and sealed the hinge gap with self adhesive clear tape. This makes for efficient control surfaces.

What more is there to say than to wish you very happy 'Huntering'!" 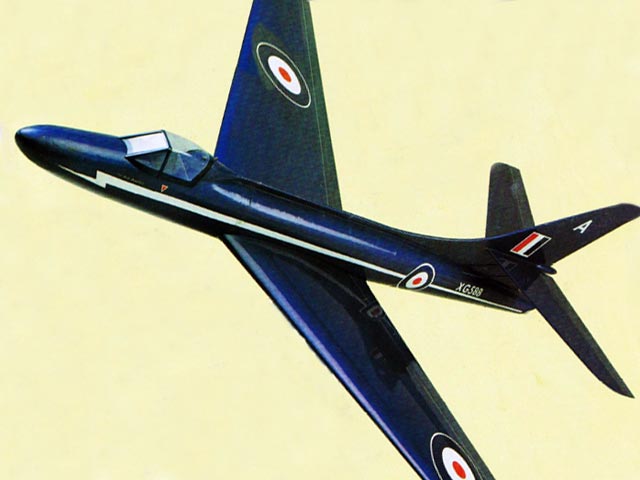