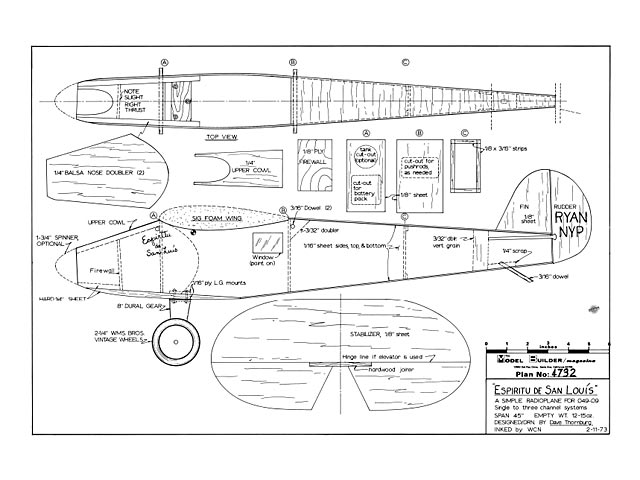 Quote: "DAVE THORNBURG brings us the little-known story of a famous south-of-the-border aeroplane of yester-year. Lines of the small craft may look vaguely familiar, but scale is scale, and never the twain small meet.

The year 1972 was a memorable one for the small Central American country of Burlazon: it was the year of the Carloston, a dance craze that swept the small republic like a Caribbean hurricane; it was the year that Enrique Ford, lather of the country's vast and profitable sandal industry, finally dropped the venerable all-leather Model T (for trasto, 'antique') in favor of the radically new Model A (for abaratar, 'to improve') a a sandal made entirely from used automobile tires. And it was the year that a little-known stunt pilot, Carlos Aguila, captured the imagination of the entire western world by flying his small single-engine monoplane, the Espiritu de San Luis, across the Caribbean to San Juan, Puerto Rico, alone and singlehandedly (his left hand was in a sling, having been caught the week before in a hydraulic retreader at the Ford Sandal Works, where he moonlighted.)

Aguila warmed the stout hearts of newspaper readers everywhere by mod-estly insisting to the San Juan reporters that he had had no intention of per-forming so celebrated a feat. I was merely flying formation with a flock of seagulls, he said, when my omni shorted into my autopilot and I found myself hopelessly jammed onto a skip signal from San Juan. I slept most of the way. Newsmen who heard this explanation merely laughed and dubbed Aguila 'The Lone Seagull;' then, stuffing their notepads into their pockets, they pitched in to help the admiring crowd save the airplane from posterity.

And what an airplane it was, before the crowd reworded it! You could tell at a glance that it must have been designed by a modeler. Its tail moment was daringly short, its rudder and stabilizer petite - it had more area in its maze of wing and undercarriage struts than in its entire empennage. Unfortunately for the exacting scale modeler, no drawings were ever made of this intricate strut pattern, and the originals were claimed by the fans and well-wishers of San Juan. In other respects, however, the model presented here is a roughly accurate copy of the original Espiritu, the skeletal remains of which were destroyed in a museum fire during Burlazon's Glorious Revolution of 1929-1968.

As a nostalgic, sentimental, history-minded, forward-to-yesterday sort of person, you will probably want to build a model of this famous airplane. The editor will like that; for a trifling sum he will send you full-size plans (be advised that trifling is now more expensive than it formerly was.) Meanwhile, assemble for your convenience the following materials, borrowed or bought:

A small 3-channel digital and an .09 make the optimum combination; for two channel (one hundred bucks worth), use rudder and elevator and an unthrot-tled .049. Try to stay under 12 ounces radio weight, to avoid scale flying char-acteristics. If the entire airplane, ready to fly, can be kept under 27 ounces, then you too will be able to fly it singlehandedly - instead of singlemindedly, as most small RC's have to be flown.

If you're new at this business, begin construction with the wing to gain con-fidence. Hold a 45 inch Sig foam wing in your left hand and paint on one coat of Sig white Plastinamel with your right. When this is thoroughly dry (usually 2-3 days) spray it lightly with aluminum-colored buty-rate dope. This completes the wing construction - don't RC planes go together easily? Wait 'till you see them come apart!

The fuselage is only a bit more complex. Cut out one side by the plans, then use the first side to cut out the second - that way, even if they don't look like the plans, they'll look like each other. Whack out two 1/4-inch doublers from good hard stock, and while the wood's handy cut out the top and bottom cowl pieces as well. Cut the formers from 1/8-inch balsa, keeping the grain horizontal for maximum squeeze-prevention.

The firewall is 1/8-inch plywood. It's not really for preventing fires - it burns very well when it becomes fuel-soaked - but it comes in handy for mounting engines. That's why it's called a firewall. If you plan to use an engine without an integral tank, you'll want to cut an additional hole in Former A for a 1-ounce nylon clunk tank, which will almost certainly leak on your battery pack - but that's what you get for not flying sailplanes..." 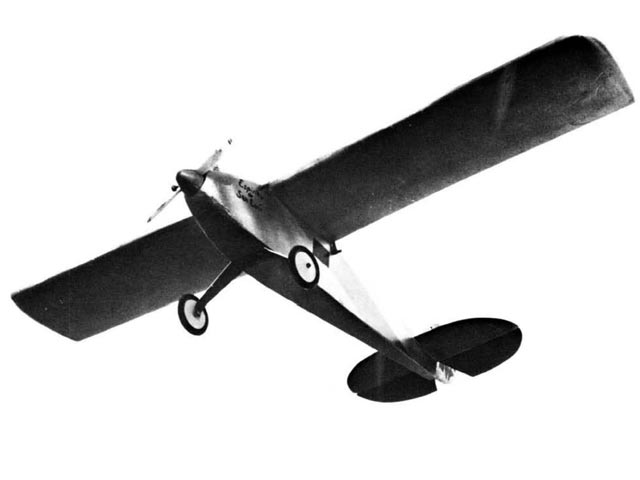 Another hilarious Thornburg piece sprinkled with little twists for those familiar with Spanish. I'm sure he took longer in writing the article than with designing the model, but nothing coming from his drawing board can be a bad flyer.
Miguel - 03/09/2020
Add a comment