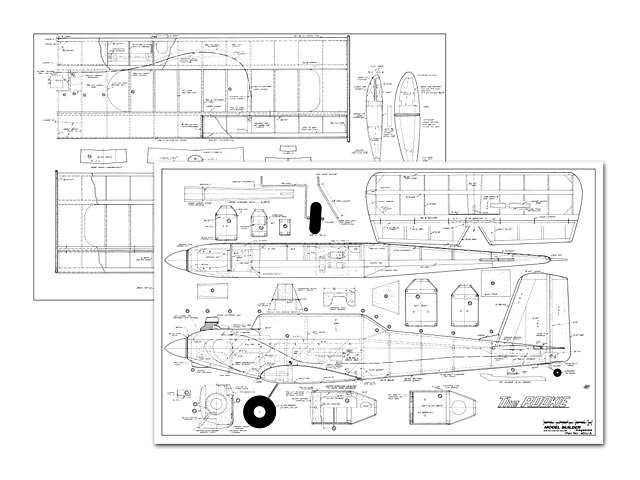 The original Rookie (oz7611) design was first published in Model Airplane News, November 1962. This here is the later MkII version published in MB 1986.

Quote: "It's a distinct pleasure to introduce this month's feature construction article. Designer of the Rookie II is the undisputed Dean of aircraft modeling and model magazine editors.

You can enjoy this airplane. It is a happy machine. Let's forget such worn out cliches like easy to fly. It stood the test of time. Published almost 25 years ago with the then sensational K&B 45, it was built by the many hundreds. Some people still fly originals. Others still build from old magazine plans or some plan service. I receive pictures. A couple of clubs recently were pre-kitting small numbers for some members.

The MK II presented here is modified, and a bit simplified, to take advantage of the unique performance envelope made possible for generous wing area and light loading by the newer, more potent of the 4-strokes, in this case the Enya .60. Another motivation was the advent of Turn around and more enjoyable aircraft that resulted, which, in turn, makes the Rookie II with its more than 6 sq. ft. of area more appropriate than ever as a fun/trainer.

In 1960 (I began in 1927), having married off a few of the nine kids, i managed at long last (with a used Orbit reed set) to get beyond escapements. Reeds, like propo soon to follow, was a different world. I had to teach myself to fly awesome 'multi' or 'full house!' I created my own trainer, capable of aerobatics by the novice. The cabin was fading, and the low-wing Astro Hog (oz4756) must have been around, because, how otherwise, would I have dared my first low wing? The Dark Ages taboo that low wings were impractical haunts us to this day. There is no reason why a safe, docile low wing doesn't make as good a trainer as any high wing. I feel more comfortable with the MK II than I would with many aileron/ trainer bombs that dominate the scene today.

I wanted a touch of realism, a fresh look, so incorporated a long sheeted canopy and big tip plates. The tip plates on the MK II are smaller, rather cosmetic, and maintain the older Rookie theme. To slow down the craft I used a thick, semi-symmetrical foil. A 'zip' section, it was 2/3 upper, 1/3 lower with a well-rounded leading edge. The tail dragger gear was given a huge tread as a cross-wind precaution.

A hot-flier son test flew it, including consecutive rolls on the first flight. At the club site guys laughed, warning it could not possibly roll with such a huge wing and such small ailerons. It displayed a suitable roll rate and two members, then in the top 10 at the Nats, put it through the full pattern. Dumbo the trainer! Since then I have had many user inputs. People fly without the tip plates with no ill effect, and many round off the tips as well, but then needed more aileron span. The MK II has larger span ailerons. One man reported that the big tip plates displayed a weathervane effect in stiff cross wind takeoffs - my smaller ones show no sign of that.

I quickly discovered that the MK I could fly in ground effect while I walked beside it, holding up elevator. Inverted and consecutive rolls came easily - it needs very little persuasion to go inverted. But for a beginner, the coordinated use of rudder, ailerons and elevator, was a nightmare. Most of us flew elevator with the left hand (also rudder), and ailerons and power on the right. Also, a reed servo required two channels, so a reed transmitter was a forest of sticks. Experts pulsed all those sticks like a concert pianist for truly proportion flight (at least to the eye), I was in constant trouble..." 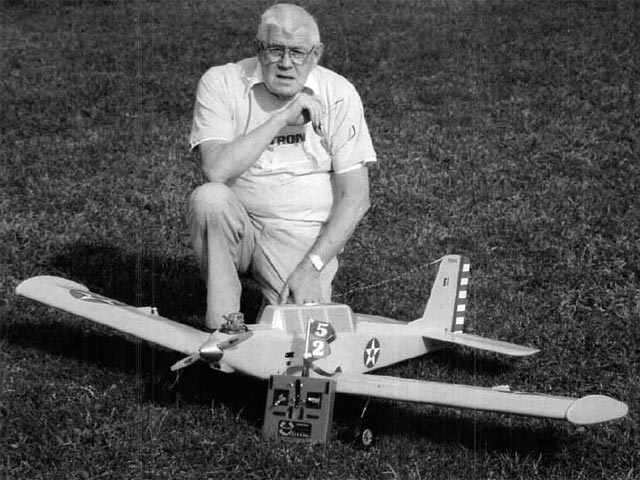