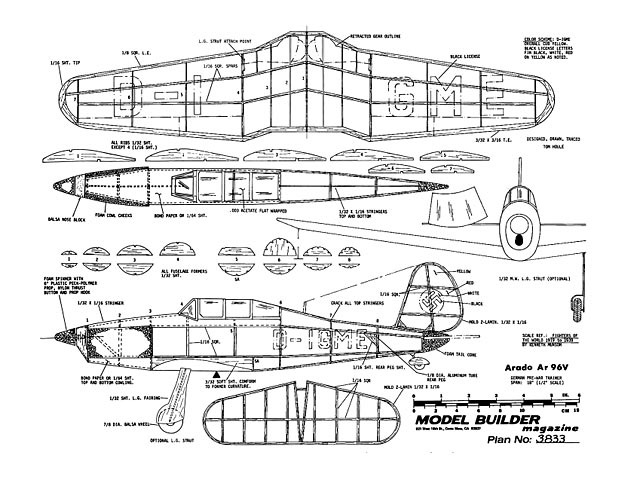 Quote: "Originally intended as a trim and balance test bed for a later six-foot version, this 18-inch rubber powered scale model of a German trainer has proved a worthy flier on its own merits. Arado Ar 96V, by Tom Houle.

My motive for selecting the Arado Ar 96V as a 1/2-inch scale subject is somewhat unique. Dave Gibson, a long time modeling friend, formerly of Wisconsin, now living in Canton, Ohio, had challenged me to design and build a six-foot span rubber powered scale model. Bill Winter, in editorial years ago, described the flying of such models at dusk. He described the eerie sensation of a Nieuport silhouetted by the moon as it ghosted along - only the prop ticking over made any noise at all. Bill, in his way, turned us both on. We knew that six to eight-foot gassies were popular in the early 40s. But rubber scale with six-foot span?

As we all know that Bill Winter never lies, the gauntlet was thrown down. Could it be done, sez Dave. You bet, sez me! But before I tore into that much balsa, I thought I had better select a subject and try it out in 1/2-inch scale first. Many trim and balance problems could thus be checked out.

After searching for a long time, and being heckled for delaying the challenge, I ran across Kenneth Munson's little book Fighters of the World 1919 to 1939. In it I found the Arado 96V prototype. Its lines and moments jumped off the page. It had the required longish nose arm and also had a respectable tail arm. The swept back wing plan would allow an aft balance point. And it was aerodynamically clean and slim with retractable gear. It seemed that with a slightly enlarged stab and fin, I would have it.

The two-view in the book was blown up to 1/2-inch scale (18 inch span) and a plan was drawn. However, before I describe the construction let me tell you a bit more about the aircraft from an historical standpoint.

The Arado 96 entered German service in 1939. By 1940, it had become a standard German trainer type. The first prototype designated Ar 96V-1 (civil license D-1RUU) was designed and first flown in 1936. It was followed by the V-2, which had modifications to the internal cabin enclosure. These two prototypes formed the basis for the production model Ar 96A-1. This version was powered with a 240 hp Argus AS 10C power plant. Underpowered as it was, it still possessed excellent flight qualities. The conversion to a 350 hp engine in the V-3 prototype proved that only additional power was required.

Two additional increases in hp were implemented before production ceased. Production units eventually evolved into the B-1 pilot trainer, the B-2 gunnery trainer and the B-5 (similar to the B-2 except for the addition of radio equipment). Interestingly enough, a much developed model, the Ar 396, was produced after the war in France by SIPA and in Czechoslovakia.

My model is built, marked, and colored as it appeared in K Munson’s book; the Ar 96V prototype (probably V-2) as it appeared in civilian markings in 1936. The overall color is Cub yellow. License numbers are black. The broad fin stripe is red and the swastika is black against a white circle background.

I would not rate this project as one for first model beginners, but if you have built a few stick-and-tissue kits there should not be any problems. Just don't get carried away with your glue. Most balsa wood joints will break before even a poor glue joint will let go. And please do not use R/C hard balsa. If in doubt, use the softer stuff. There is enough structural volume to enable the use of soft wood.

Let’s start with the fin and stabilizer. Both require the soaking, laminating and molding of two 1/32 x 1/16 strips around 1/16 balsa sheet forms. There has been much said about this process. Suffice il to say that the molded pieces should dry overnight before they are removed from their respective molds. Both the stabilizer and fin use 1/16 sq, except for the molded pieces. Pin them to the plan over clear plastic wrap and assemble in standard fashion. When dry, clean up the glue in the corners, lightly sand and set them aside.

Now to the wings. They can be built as shown on the plans, in which case they will be plenty strong, or you can use the cracked rib method developed by the FAC and others. It’s faster and I think, every bit as strong, not to mention a weight saving. So try it. Just don’t forget to make a 1/16 sheet internal spar, which should be located where the top 1/16 sq spar is shown. Taper it per the front view, allowing for the 1/16 sq ribs top and bottom.

The wing builds up in conventional fashion. Be sure to shape the 3/32 x 3/16 TE before attaching to the wing. If you elect to build the wheels-up version as I did, then use 1/32 sheet for rib #4, not 1/16 as the plan specifies. If you build the wheels-extended version, then the struts are epoxied to these 1/16 ribs. The license letters, aileron, flap and trim tab outlines are drawn in ghost lines. The license letters appear both top and bottom. Block up one wing 2-1/4 inches with the other securely pinned to the plan. This will give you the correct dihedral angle. Glue and let sit overnight.

The fuselage (what I like to build best) is a basic box with top and bottom stringers plus bond paper and foam forward of the wing. Sort of sounds like a craft project, doesn’t it, what with foam, paper and stringers? Start by laying out the two 1/16 sq fuselage sides. Build them both over the plan, one on top of the other, separated by a piece of plastic wrap. That way they come out the same.

When the sides are thoroughly dry, separate them and erect the sides upright over the top or plan view. I always pre-cut my cross-members in pairs and have them ready to install once the two sides are in position. Install the cross members and square up the structure. While you are waiting, clean up your finished wing assembly. It’s probably loaded with little glue webs and the leading edge needs to be rounded off.

The addition of the formers rounds out the basic structure. Add the 1/32 x 1/16 top and bottom stringers and the foam cheek cowl blocks to the fuselage front sides. I use foam from ordinary meat trays plus whatever blocks I can pick up in the local hobby shop. Sand lightly with fine paper and it will shape beautifully. For much handled areas, coat the foam with Tite-Bond or Sig-Bond to form a smooth, hard shell. The tail cone is also foam. Cut it carefully to ensure the correct stab angle. The stab could be set perhaps another degree negative but not positive! I had to warp in just a touch more negative than shown. Coat the cone with a light film of Tite-Bond..." 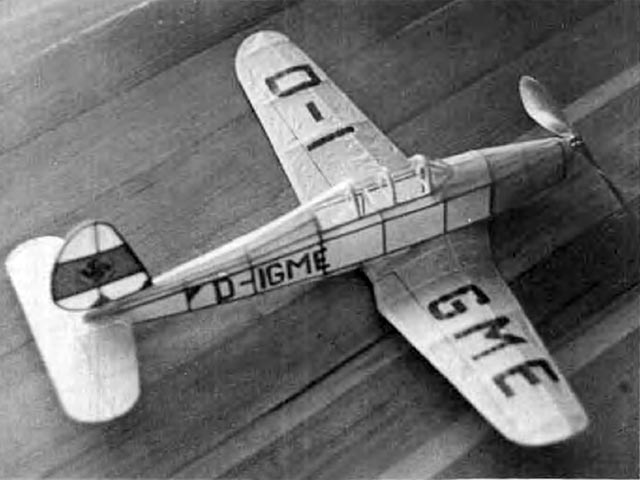