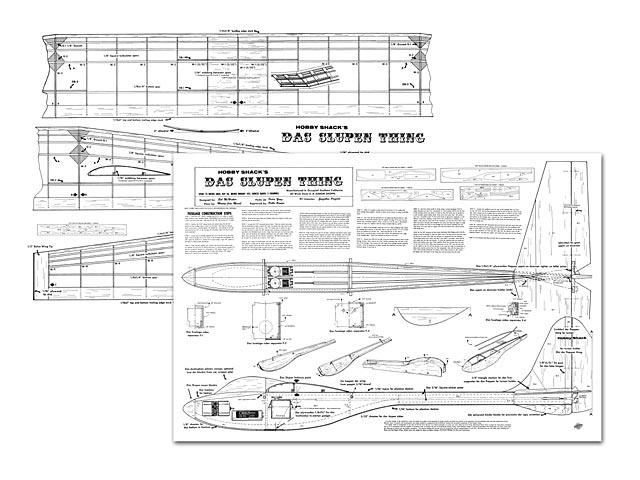 Quote: "Attached is a set of plans for the Hobby Shack 'Das Slupen Thing' glider, which holds a very special place in my heart.

When I was young Hobby Shack was the hobby shop to go to if you wanted the best selection of planes, boats and cars. They carried plane and glider kits by OK Pilot, Airtronics, Bob Martin, Marks Models, and Top Flight to name a few. They were also one of the first hobby shops to carry Tamiya RC kits in great numbers. Eventually Hobby Shack was bought out and became Hobby People, from this point the quality of their kits and service declined. The original store was located at 18480 Bandilier Circle, Fountain Valley, CA 92708 as indicated on the cover of the box and which I will elaborate more on later.

A friend of mine, who was also into RC gliders, originally gave me this kit after starting it, but he was unable to find the time to finish it. I was more than happy to take this kit off his hands and started laying out the wing on the building board I had in my room, then realized I should probably finish covering another glider that was almost ready to go. So I slipped the board with the plans and balsa back under my bed. A week later I came to the glider and found that a lot of the ribs were missing or destroyed, the plans had a big tear in them and the fuselage was smashed. I quickly realized the housekeeper had come over the previous week and not realizing the glider was under my bed, vacuumed most of it up.

I was mad, but it was my own fault for placing my work surface under my bed. I always felt really bad about losing this glider, I always got a kick out of the plan's unique construction callouts and really wanted to see how it flew when finished.

As for the original location of the Hobby Shack store in Fountain Valley, it was directly across from where I currently work at the Orange County Sanitation District. Further my ex-coworker (now retired), used to work at Hobby Shack, which is probably why she looked so familiar to me when I started at the district. Lastly, the district where I work has purchased the Hobby Shack property along with adjacent properties which will be demolished and our new headquarters built in their place. SMH. A sad end to a once great hobby store.

Fast forward to this year, this kit had come up a couple of times on another website, but I always seemed to have missed the last effort of bidding. The third time was a charm, even if it meant having to pull off the highway to place my bid. 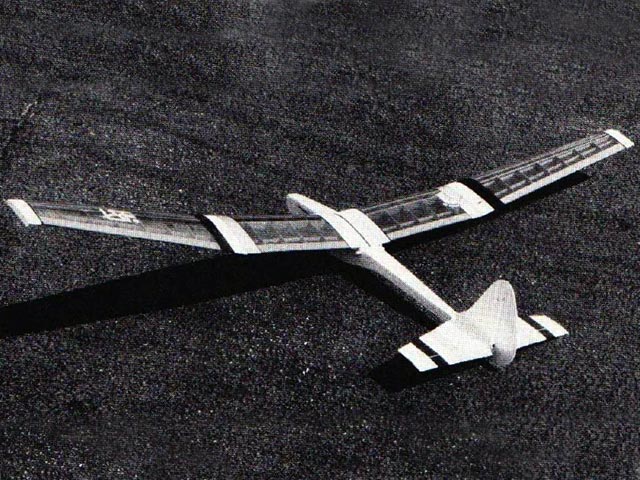 The original Hobby Shack was on Knott Avenue in Buena Park California. It was founded by Paul Bender after he left Hobby People. Bob McVickar founder of Sureflite was in the same complex. Sureflite marketed their own line of kits as well as manufacturing exclusive kits for Hobby Shack. Das Slupen Thing and Eye Soar (oz11998) were entry class models for the popular 72" class. The wing was highly influenced by Craftaire's Drifter. The Eyesoar and Das Slupenthing use the same wing with different fuselages. The Eyesoar is lighter and is the better performer.
LarryJolly - 30/08/2020
I have been looking for this, a long time. This was the first RC plane, of any sort that I finally figured out how to fly. Eventually, she succumbed to prior damage during a high-start launch.
Thanks so much for giving the opportunity to fly her again!
ed - 30/08/2020
Love this design... actually not an exceptional performance, but just it was one of my very first sailplane and my master, a true US gentleman called Gordon Flint teached me to built, cover and chasing my first thermals. After more than 45 years built again [pic 004], this time with electric propulsion and some carbon refinements, see https://www.rcgroups.com/forums/showthread...
Manolo - 31/08/2020
This was my very first RC plane! 1980 or so. I saved my money and bought an EK 3 channel radio. I was just a dumb kid, and never considered the fact that the brick would not fit in this plane! I built and covered the plane. I carefully balanced and straightened the surfaces. I couldn’t wait to save more money, so I decided to use it as a hand toss free flight, until I could save the money for another radio.
Well, we lived across from a golf course. We were at the top of a hill ant the tee for 18 was directly across from the house. Probably 250 yards and a nice downward slope. It was just before dark. I gave it a toss. It went perfectly straight. It flew! I was elated! It flew! And flew. And flew. It flew so well that it crossed the parking lot, started a right turn towards the road and hit the corner of the clubhouse. Destroyed the left wing and stab.
It was one of the biggest emotional roller coasters I have ever been on. I was hooked. Used that EK brick in a Sig Kadet. The rest is history. Am I gonna build this glider? Absolutely! Thank you so much for making it possible!
Joe Petro - 31/08/2020
Add a comment