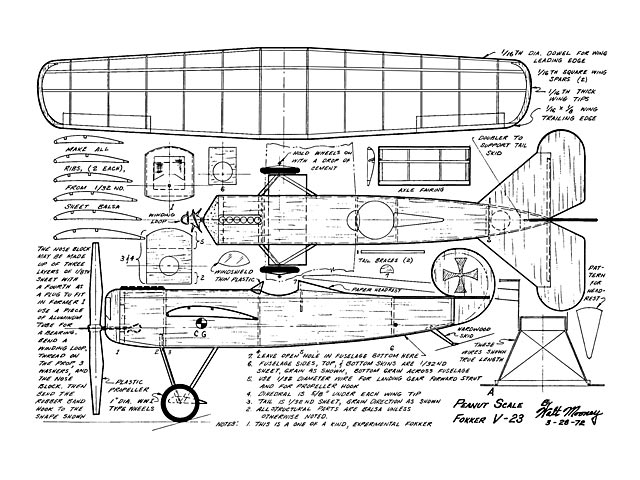 Quote: "Fokker V.23, by Walt Mooney. An almost unknown Fokker which never made the scene in WW I, a modeler's paradise but a pilot's nightmare - if you wanted to see below you. The V.23: the plane made of left-overs.

This is a model of a one-of-a-kind (although there were several similar types) Fokker monoplane built in early 1918 to take part in a German fighter competition. Although it is still relatively modern looking, it did not win the competition and, therefore, only one was built. Probably one of the main reasons it didn't win was the poor visibility down and forward. The wing on the V.23 was practically the same as the one used on the later parasol winged D.VIII - the fuselage looks much like a lengthened version of the D.VII with the cockpit moved aft and a headrest fairing added, and the tail looks like it may have come off of a D.VI. In 1918, Fokker probably had lot of pieces to choose from to make variations on a theme. It is said that one of the Fokkers in the competition was made in five and a half days.

This business of using available parts results in a different color scheme than one would expect on a WWI Fokker. For instance, there is a cross only on the rudder. There is no insignia elsewhere on the airplane. Secondly, the paint job looks rather rough and, although the photograph I have is not easy to decipher, it looks like the wing had the streaky greenish varnish put on with a big brush. I assumed this was true on the fuselage too, so the model was finished as follows.

The wing and spreader bar were covered with white tissue and given a single coat of dope. The rest of the model, which is sheet balsa, was given a light coat of sanding sealer. The top of the wing, spreader bar and the top and sides of the fuselage were colored with a felt pen to look like the streaky varnish. The bottom of the parts and all of the tail was left white. Aileron outlines, tail hinge lines, cockpit outline, front of headrest, engine and radiator detail and the black cross on the rudder were put on with black felt pen.

Now for an admission. I don't have a three-view of the Fokker V.23. I do have a photograph, on page 356 of German Aircraft of the First World War, by Peter Gray and Owen Thetford. This book also has three-views of the D.VI, D.Vll and D.Vlll. The model drawing was made up from these and the use of the photo. I believe it is an accurate representation of the V.23 and from the same direction as the one photograph I know of, it looks right.

The model structure is very easy to make. Since the tail and the fuselage are made of sheet balsa, it is very important to select light but strong balsa. I prefer the lighter colored sheets from a looks stand-point. The fuselage is simply a box with flat sides and bottom and a rounded top. The grain should run lengthwise except on the bottom, aft of the landing gear wire, where it should be crosswise of the fuselage. Do not cut out the cockpit hole until the whole fuselage is covered and has had time to dry. The nose block on this model is laminated out of three layers of 1/8 sheet with a backing block that is cut out of former number 1 which is also 1/8. The other formers are made from 1/16 sheet. Leave a slight gap in the bottom covering between formers 2 and 3 to accommodate the landing gear wire. There is a triangular doubler at the aft end of the fuselage to support the tail skid. Leave a hole on the bottom just behind former 6 so the rubber motor can be seen during installation.

The wing is of very standard construction, as is the spreader bar. The tail pieces are simply cut out and sanded smooth. Assembly is also simple. Slip the wing through the fuselage and put a drop of cement at the leading and trailing edge on both sides. Cement the tail pieces in place. Make the top of the dummy engine from scraps of balsa and install the bond paper headrest and the thin plastic windshield. Cut the tail braces from thin wood (the model shown uses 1/64 plywood), and install them, 'x' marks the spot on the horizontal tail.

Any small plastic prop will work. Don't forget a winding loop to make the use of a winder easier and more efficient.

Flying the Fokker V.23 is the best part of the whole project. The original flew right off the board. It balanced at the CG shown on the plans. As the motor ran out, it did have a slight tendency to wallow, that is, to rock its wings back and forth. This can be caused by too small a rudder or by too much incidence at the wing tips so we washed out our wing tips. That's an aerodynamic engineer's way of saying that we warped the trailing edge of the wings up at the tips. A warp that results in having the trailing edge of the wing about a sixteenth of an inch higher than it would be if the wing were untwisted stopped the wallowing.

A single loop of 1/8 rubber is just right for power. Use rubber lube and a winder, and stretch the motor out 3 to 5 times its unstretched length at the beginning of winding in order to get maximum duration. Shim the nose-block for side or down thrust to adjust the powered part of the flight." 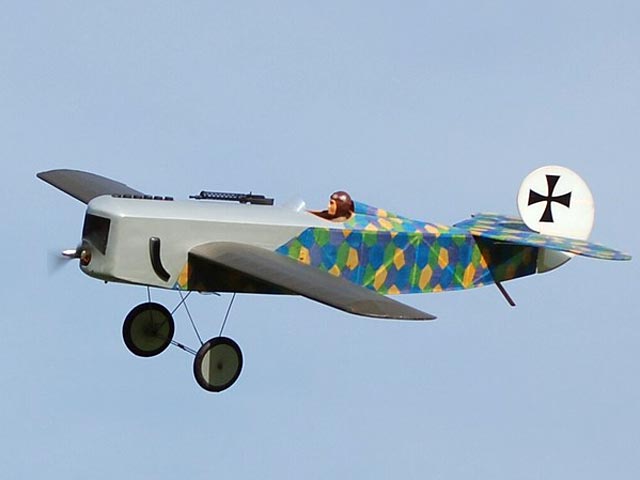