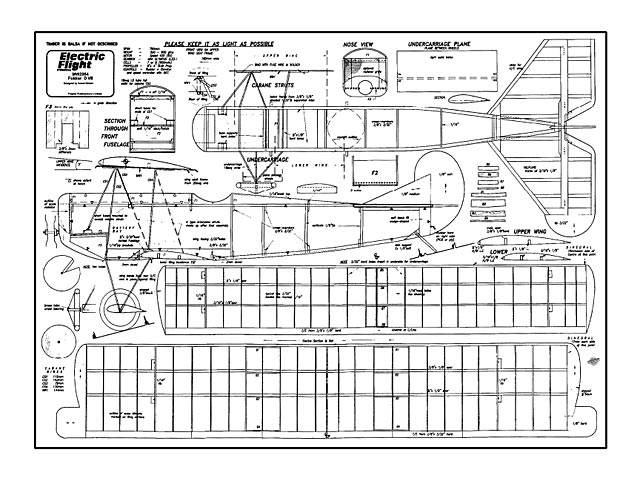 Wandering through some back issues of EFI, I came across the Stephen Mettam SE5 (oz12497) free plan and construction article in the May/June 1996 issue. Great, I thought, I must build one for my Speed 400 gear. My reason for not building it when the plan first came out is that I did not have the 400 setup, most of my flying is with 600 and 700 size models.

The mind starts to wonder now, maybe I should build an SE5 and a Fokker of some kind, for a bit of gentle combat with my friend Dave Greer. I could then hang them up in my son's room. A quick word with Stephen, that his SE5 needs a sister plan, hint, hint - and what about a Fokker D.VII? He said, that it sounds interesting, let's see what you come up with.

Scale: This is my first scale-ish model and my first biplane. It is scaled from a three view I have. The rib spacing is 'scale'. The only liberties I took was with dihedral and the rudder (5 mm bigger all round) which I find was not necessary as the rudder is very powerful, much to my surprise. The rudder on the plan is to correct scale.

She has been done to the same scale size as Stephen's SE5 and as you can see in the photos the full size was about 2 feet bigger all round than the SE5. Only after building the SE5 did I see the fuselage is a lot smaller in cross section, than the Fokker D.VII.

All of the Fokker D.VIIs that I have seen, models or full-size, seem to have different radiator, engine and cowling shapes and styles. I also did not do the scalloped wing trailing edges, no, I did not forget, some of the full size don't even have them!

Colour - what a nightmare. I have 3 colour references for 'LO!' and they are all different. One in the USA has a black nose, like mine. Another has a red and white stripped wing and they all have variations on the dreaded 'Lozenge' pattern, which I do not have the time for (see '3 year old son') so I just used green Solarfilm for the lozenge areas.

The LO! markings are different thickness as are the markings, on the full size so my D.VII is more of a 'fun scale'. Did that German pilot (was it Udet?) have three different planes/girlfriends, or girl-friends named LO! Or is it a squadron name?

Building: Please note, you must use light balsa except where indicated; the nose is short and you will have a problem if you don't.

This is the first model that I have drawn first and then built - so all the parts fit. At this point I need to thank Stephen for a few of his construction methods that I have copied. Normally my building is: Yes that looks fine, glue then draw. Construction is simple but more involved that Stephen's SE5, more struts, ribs, etc.

No epoxy was used at all, the whole model was done with cyano. The only deviation from the plan is the soldered joints on the struts, which should be cyano and strong cotton. I ran out of cyano at 11.30 pm - rats!

Wings: I used the normal sandwich method to shape all the ribs from light balsa, use hard balsa for the spars, leading edge and trailing edge. Note that the balsa fill-in, between the ribs on both wings, are to protect the wings from the rubber bands. You can do the fill in as you glue in the ribs.

The top wing has a flat centre section and dihedral on the outer panels and the bottom has normal 'V' dihedral. Use 1 mm ply braces on the LE, TE and the main spar, on both wings. Soft block for the wing tips and use medium balsa for the false ailerons. Use medium balsa blocks for the wing strut tubes.

Do not forget the hard balsa inserts/sheeting on the bottom wing to support the undercarriage wire.

Fuselage: Try to use light balsa throughout and medi-um for the crosspieces. Cut out left and right fuselage sides and lay them on top of each other and mark out and drill the location for the cabane tubes and the dowel holes.

Add in the 3 mm square balsa around the edges and then glue in the 2 x 5 mm vertical braces, the 1.5 mm ply doubler for the wing dowels, tail seat and the bottom wing seat. Sand down the insides of both rear fuselages so that that when joined it is the same thick-ness as the rudder. Add in the motor mount and rear motor mount former to one fuselage side.

Glue on the front crosspieces. When the glue has set, pull in the tail and glue in the final crosspieces at the rear. Glue in your servo rails and your cable tubes while you have the chance to still get in. Put on the round formers for the font and rear cockpit and add on the top and bottom decking. I wet the top of the rear and hatch decking, to get them to curve around the formers easily and used slow cyano to glue them on. Note the 5 mm balsa block at the bottom rear of the fuselage to support the spruce skid.

The tubes for the cabanes can now be cut to size and glued to medium balsa blocks, with about 2 mm protruding, so as to be flush with the fuselage sides. I used a bit of fine glass cloth cyanoed over the tubes as a bandage for strength.

Glue on the nose blocks and then lay some plastic over the hatch area. Now glue up a 3 mm balsa framework for the base of the hatch on top of the plastic sheet so it does not stick to the fuselage, add on the front and rear formers, same shape as the cockpit ones and then sheet over. Add in a few inter-nal strips so it cannot slide around. You now have a super fitting hatch. Glue in a few cross braces for stiffness. I used Velcro to hold it in place and it is also a tight fit.

Simple Wire Bits: All of the struts are actually very easy, I was always put off biplanes for this reason but doing the D.VII was fun. The true lengths are indicated for you, use the plan for the angles. I started with the wing wires, reference no.WWI , they are ones that the wing sits on and rubber bands hold on to, bent to shape and cleaned up with emery paper. Please clean all the wire, it will make the glue and paint adhere much better. 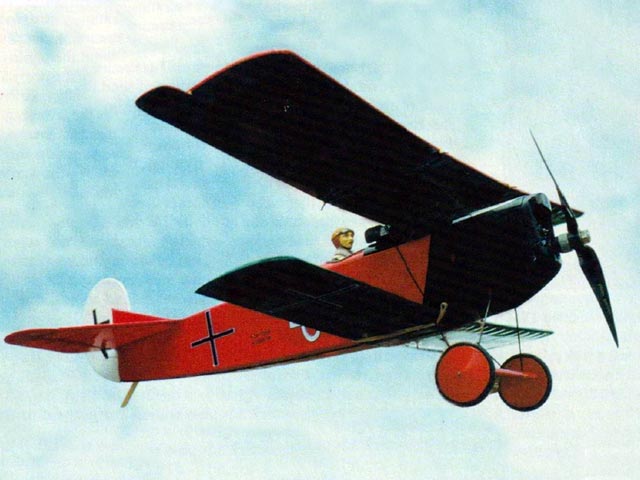