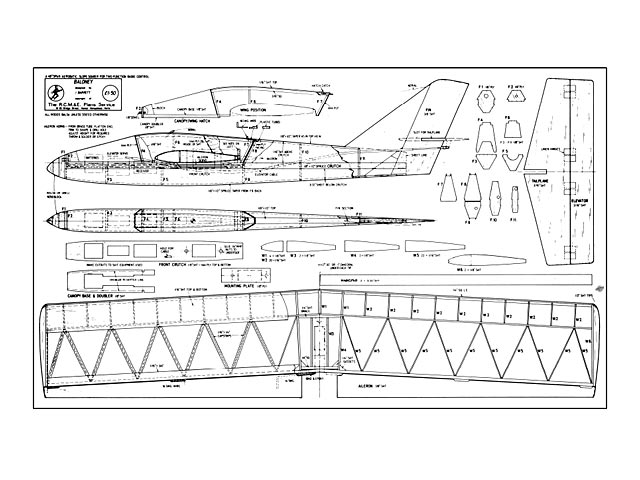 A breezy day on the slopes soon produces a swarm of acrobatic gliders, and it becomes apparent that in the development of this type of machine, a stereotype form of design has evolved. Fuselages have low frontal areas and little character, and wings are large flat planks, the lack of dihedral enabling inverted flight to be carried out with-out side-slipping problems.

'Baloney' is an attempt to produce a relatively cheap, simple-to-make aerobatic slope soarer, which gets away from the standard layout without detracting from the performance. A more elegant wing planform is produced by incorporating slight sweepback. The wing structure is of parallel chord, and tapered ailerons are fitted to improve the outline and as sweep-back also has the effect of correcting sideslipping and yaw, it can be a substitute for dihedral. However, for the sake of appearance, a little dihedral is incorporated, too little to have any significant effect when inverted, as it is balanced out by the sweep back.

The wing is attached to the fuselage by screws hidden beneath the detachable upper decking, which dispenses with external rubber bands and is therefore aerodynamically cleaner.

Fuselage design is again aimed at appearance, without sacrificing the practical aspects. Its deep, narrow, diamond cross-section has a relatively low frontal area, but although slim the forward part of the fuselage will accommodate most modern proportional radio systems without being unduly cramped. All-sheet tail surfaces enable easy repairs to be made on the field in the event (to me at any rate!) of the occasional prang.

Construction: Construction is straightforward and the following notes should enable you to build theI model quickly and be out flying after only a few evenings' work.

Wings: Beginning with the wing, a glance at the plan will show that the ribs aft of the main spar are placed diagonally, making the wing of semi-geodetic construction. This produces a structure which is very stiff in torsion, and prevents the occurrence of flutter during high speed manoeuvres. Good bending strength is supplied by the full depth main spar. As both the main and rear spars are angled at the centre section to give both slight sweep and dihedral, it is important that accurate joints are made, with well-fitted braces. Build each wing half separately, flat on the board, pack-ing up the leading edge and rear spar as required by the semi-symmetrical ribs. The diagonal ribs can be cut with some spare length at their trailing edge, which should be trimmed off accurately on assembly.

When the two halves are joined together, the ply plate which carries the securing screws and the aileron servo is epoxied in position on the chord line of the two centre ribs. Make generous epoxy fillets between this plate and the adjoining wing structure, as it transmits the flying loads between wing and fuselage.

Sheet the leading and trailing edges, and add the capping strips, using PVA adhesive. The capping strips are load bearing, making the rib cross-section into an I-beam. Note that the sheeting on the rear spar overlaps slightly, forming an effective shroud for the aileron hinges.

Fuselage: A crutch construction is employed for the fuselage, the two main members being glued to either side of the nose plate. This plate, built up from two laminations of 1 mm ply stuck to the top and bottom of 1/8 balsa, has cut-outs in it to locate the radio gear, and also carries the nuts for the wing mounting. The original had 1/4 in Whitworth square nuts, securely epoxied to the underside of the plate. The positions of the nuts should be marked accurately from the holes in the wing centre section. Balsa blocks on top of the plate will support the wing when the screws are tightened.

Bring the two side members together at the rear, sandwiching the fin between them, and then insert the formers. Ensure that there is no twist or bend in the fuselage by sighting along it from the rear. When all is square and dry, add the top and bottom keel pieces. At this stage, epoxy into position the flexible tube for the elevator control, keeping the curve radii as large as possible. Note that the rear end of this tube runs along the side of the fin, coming out of the final fuselage sheeting just aft of the rear former. Before applying the sheeting, however, screw the wings in position, and continue with the canopy construction.

The whole upper fuselage from the nose block to the trailing edge of the wings is detachable to allow access to the radio gear and wing fasteners. A peg locates the front end, and a sliding pin secures the rear. For those of you who are adept at moulding, a full length canopy can be produced, but for the others, like me, a built-up unit can be made, with flat acetate sheet for the cockpit transparencies. Doublers along the bottom edge are used to form the canopy to the crutch planform..."

Gee, is it so long since I went the hard way and scaled up the drawing (Longhand) over Christmas holidays 1975 to make one of these? Compewker cleaned and scaled this in about 15mins.
Oh yes, flies well.
Circlip - 26/08/2020
Add a comment