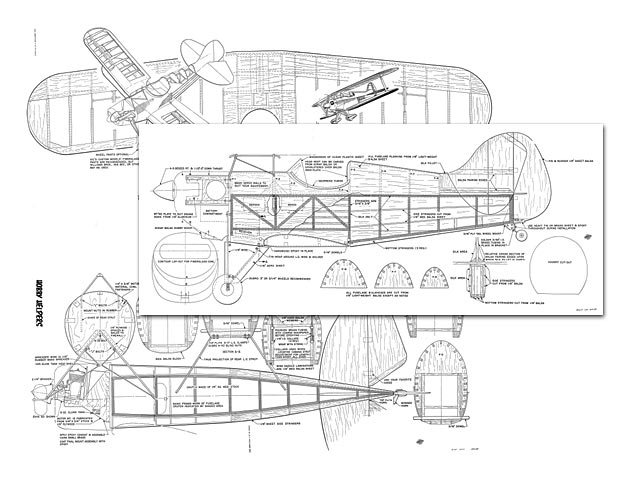 Quote: "RC model of Betty Skelton's version of the great Pitts Special is a delightfully slow flyer with its high-lift wings.

PLASTERING my scale PBY flying boat into the side of a metal hangar at the Oskaloosa, Iowa airport meant the end of the model which I had planned on entering at the 1966 National Model Airplane Championships in Chicago. I was determined to go to this event, not as a sight-seer, but as one of the contestants. The reason that the flying boat crashed was that I took it off with the receiving antenna retracted; the model then flew out of range of the transmitter.

So I had to have something new built in time for this event. Having always wanted to build Betty Skelton's Little Stinker, better known as a Pitts Special, I had figured that, if the boat could not be fixed in time, I would use this model as my scale entry. I have seen the real airplane at airshows and had always wanted to build one as a model. On the day that the boat crashed, plans were started from fac-tory drawings obtained previously from Mr Pitts in Florida.

The scale selected for the Stinker was one inch equals four inches. This would give the model around 850 square inches of wing area. The top wing would then have a span of 52 inches. This model was to be built as true to scale as I could possibly get it.

As I was drawing the plans, Loran McGinnis, a local modeler here in Ottumwa, came over to wipe away some of my PBY tears, and saw the plans. He asked if he could also build one. I said, You are welcome to climb aboard, but what this critter will fly like, I can't guarantee. Loran replied, OK let's start building.

One thing the writer hates to build is a set of wings for a biplane, so I built them first. Ribs are made from 1/8 sheet balsa (3/16 can be used). They are all the same size, except for the last rib on each wing. A template made out of heavy cardboard was used for marking the ribs on the wood.

Horizontal tail and elevator: These parts are made out of 1/4 in material. The tail group is finished with one coat of paint, before gluing to the fuselage. Several different methods of attaching controls can be used. I think cloth hinges work fine and are constructed in the same manner.

Fuselage: This is built around a box-type foundation. Three-sixteenths hard balsa is used on the fuselage inner sides. One-quarter inch longerons and uprights are glued onto the sides with Elmer's glue. When the two sides are dry, and are exactly the same shape, epoxy the tail and the front cross members in place. Make sure the front end is absolutely square. Cut out the other 1/4 in cross members, pull out the fuselage sides, and glue these in place with Elmer's glue. On these cross members also draw a line to show center. A string can be tied to the tail then ex-tended to the front, letting the string rest on the marks to insure that the fuselage will be constructed true.

After this part of the fuselage is done, the formers along the sides and top can be glued on. The way to make sure that the formers that go next to the firewall are glued in flat, is to turn the fuselage on end and then lay it on a flat surface. After all the formers are glued in place, notch them out in the appropriate spots for the 3/16 x 3/8 longerons.

Epoxy in the brass tubes for the cabane struts. The front one is hooked by bend-ing the wire at the end 90 degrees, then grooving the firewall so that about half of the wire is in the wood. J-bolts are then used to hold the wire onto the firewall. The rear cabane strut slips into the brass tubing, which is epoxied and tied with string onto the formers. Four wheel collars are used to hold the struts into place. Notch the wire where the collars fit on, after the top wing is aligned with zero degrees incidence (the bottom wing has zero degrees also). Before epoxying the brass tubing into place, rough them with sandpaper or a rough file. The epoxy glue will grip the surface better. Also wax the inside of the tubes before gluing them; if glue gets inside, it will come out easily. Be careful not to get wax on the outside of the tubes. After wing align-ment, collars can be epoxied except right on the hex screws. This method of hook-ing the cabane struts onto the fuselage permits the model to be built and painted before the struts are added. The struts can be taken off, if need be, at a later date.

Now sand the whole fuselage lightly before covering it with 1/8 sheet balsa. After the sheeting is put on, the fuselage is sanded down. The cockpit is cut out after the fuselage has been painted. The 3/16 plywood firewall is glued on.

Nose cowling: The cowl is fiberglass. The mold for the fiberglass is made as follows: Screws through the firewall from inside of fuselage hold the 1/8 plywood plate in place. The balsa blocks on this ply plate are fastened with Elmer's glue. After it has dried, carve to shape. When satisfied with the shape of cowling, remove it from the fuselage and apply several coats of fiberglass resin. Sand between coats until a smooth finish is obtained. Then apply wax and polish for a high gloss. Then pour plaster of paris over the cowl to get the mold. Make the fiberglass cowling.

The way of fastening the fiberglass cowl-ing to the fuselage can be seen on the plans. The air scoop is made from a hard piece of balsa, and held onto the cowling by two screws from the inside.

Miscellaneous: The horizontal stabilizer and elevator as a unit is now glued onto the fuselage. Take extra care to insure true alignment. After thoroughly dry, glue on the vertical fin and rudder as a unit. Check for proper alignment. The silk fillet is put on next. It is made from 1/8 music wire and held in position by one bolt through the firewall, and the two places under the fuse-lage. The two plates are held in position by screws in the grooved hard wood.

Motor mounts: They are made out of 3/8 x 3/4 motor-mount material, bolted to the firewall. The 8 oz Veco clunk tank is mounted between the engine bears. I used an STP can for a battery case. Screw can onto the firewall, with half of an old 6 oz. Veco clunk tank to cover the open end of can.

It was determined that about 4 or 5 degrees right-thrust on the engine, and 1-1/2 to 2 degrees down-thrust was ample.

Wing struts: Make them out of hard balsa. I covered them with white pressure-sensitive tape. Wheel pants always slick up appearance. Mine are fiberglass.

Flying: There is plenty of room inside of of the fuselage for radio gear. Servos can be shifted back and forth to get the model properly balanced.

My model takes off a lot better on a concrete runway if the elevator is held up until reaching flying speed. The elevator then is released to neutral position. This helps to eliminate any ground looping tendencies. Taking the model off a grass field presents no difficulties. In the air, the ship flies gracefully. It handles well. With the Clark airfoil, it comes in nice and slow, and has a moderate floating tendency in the flare-out of the landing.

On our models, the wings were held onto the fuselage with a rubberband and bolt affair which has been changed on the plans. The reason for change was due to the fact that the bolt on Loren's wing came loose in flight and the top wing fell off. The model came down to earth at a 30-degree angle, traveling about 60-70 mph. I couldn't hold the nose up because, when the wing left the plane, I chopped the power and the engine died. I believe I could have gotten it down OK had the engine still been running. The plane hit the ground hard, broke the bottom wing, and the top wing came fluttering down unhurt. The tough fuselage body was not damaged, but it did cave in the fiberglass cowling. So this changed our mind about bolts!

Getting back to the airfoil, I used the Clark Y type because I wanted this model to fly easily, and to land as slowly as I could possibly get it to. A semi-symmetrical airfoil could be used without difficulty. To see how we painted our models see the cover of this magazine. You will enjoy building and flying Little Stinker. She's a beauty, on the ground or in the air!"

Quote: "Hi Steve and Mary I have a copy of the Little Stinker article with the plans pages. I am sending you the two pages which show the lower wing and the wing struts. While not to full size scale, they do show the construction so anyone wishing to build this can develop a plan from this, using the full size upper wing already shown on your site. Hopefully someone will send in the full size plan for the lower wing. Cheers, MJB"

Hello Mary and Steve,
I noticed that for this plan page 4 of 4 seems to be missing (lower wing at least).
B/R Hubert
Hubert Wolf - 25/08/2020
Ah, good point - you know I did not even notice that. Hopefully the 4th page will surface at some point soon.
SteveWMD - 25/08/2020
That "Little Stinker" artwork is just great. I wonder if I could adapt it as a bumper sticker for my car. Thanks for making this plan available!
Martin - 27/08/2020
Pity about the missing bottom wing. I don't think it can be very complex. People who are willing to do a little engineering could surely make it work, using the 3 view line drawings of steenaero.
http://www.steenaero.com/PittsS1/specifications.cfm
perttime - 28/08/2020
Add a comment