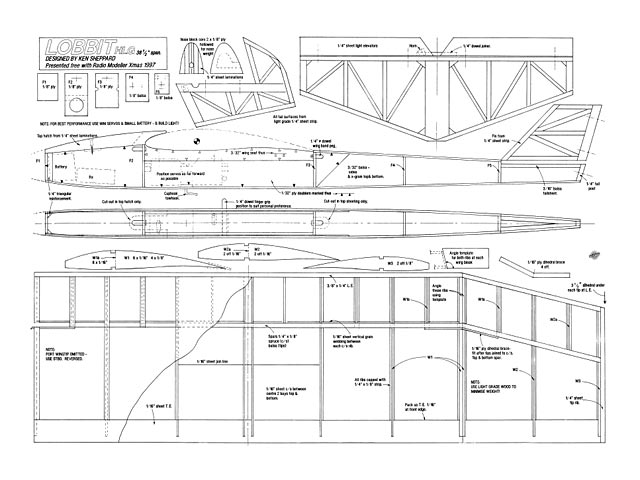 When the winter days close in, the days get short and the weather uncertain, how many times have you woken up to a nice clear, crisp morning and wished that instead of packing the car with all your gear, and making a flask of hot coffee to thaw you out, you could just pop over the road to the local park and fly? Well, now you can! 'Lobbit' was designed for small fields, minimal hassle, maximum fun - throwing it repeatedly keeps you warm and keeps you fit, too!

Keep it simple, keep it light! The secret of most successful glider designs is light weight and choice of wing section - there's a lot more to it I know, but for small models, these two factors are the most important (look out for an article an wing sections in next month's RM). The design has been kept simple, to encourage newcomers to the sport to have a go, and to keep build time to a minimum. The prototype took just one week of evenings - started one Saturday, flown the next (well, it would have done, if the weather had kept up!).

Wood selection is important. At this small size, every little bit of weight saving helps. I don't agree with the current trend of lightening holes every where, too often strength is impaired in the quest for saving a couple of grams, when careful wood selection would have saved a heck of a lot more! The spars are spruce, the tie needs to be medium stock for stiffness, but all the rest can be as soft as you can get, including the fuselage sides. The formers carrying the hidden wing band dowels are lite-ply, the nose doublers are 1/32 birch ply. Don't be tempted to sheet the lie of the wing, it's not necessary - it may look prettier, but it won't fly any better.

The flying surfaces: I usually start with the wing, it's the biggest bit and takes the longest, but only just. Cut all the ribs out, razor saw the spar slots 'en bloc' (all pinned together), to ensure accuracy and a good fit. Pin the lower tie strip to the board, packed up at the front edge with pieces of 1/16 balsa. The lower wing spar pins flat on the board, and the ribs carefully positioned over the plan, checked for squareness (and the angle of the root ribs) before applying the thin cyano (keep those fumes out of your face - they play havoc with your mucous membranes). if you don't like using cyano, try Aliphatic resin. Deluxe Materials do one that dries yellow, but is quick grab, sands easily and gives a good bond. Add the top spar, tie top strip, lie and 1/16 spar webs. Repeat for the wingtips - make sure the root is

the same both sides, and when cured, glue the tips to the centre section, checking that each tip is the same height, with the centre section flat on the board. The dihedral braces are big enough to take the load and small enough to bend along the spar angle. Don't beef them up, just cut them out carefully so that they are identical. Cut the slots for the braces AFTER joining the panels. Epoxy the braces to the spar. Fit all the capping strips and sheet the centre ribs, sand 1/e and tip blocks, and Bob's your Uncle! Tail bits are all 1/4" square strip (light grade) cut and stuck over the plan. Just round the edges off, don't bother to taper the rudder and elevator sections, if the wood choice is right, you won't gain anything and aerodynamically, it'll make very lithe difference (- purists eat your heart out!).

Minimalist fuselage I could have made the fuselage a lot smaller (and lighter) by using mini or micro servos; but I wanted a design that could be knocked up by beginners who had standard gear and would be unlikely to have a couple of small ones available (- call me Mr.Titewad!). If you've got two little ones (I'd keep it to yourself!), by all means reduce the section to suit - just keep nose and tail moments the same. The taper of the nose can be adjusted to suit the battery being used (check this earlier!), the prototype used a square pack which fits tightly against the front former.

Build the fuselage over the plan to prevent a banana shape, especially when joining the sides together at the front and back. I would definitely recommend Aliphatic for this job, because it allows time to check, adjust if necessary, and check again. Fit the servo rails and snakes BEFORE sheeting the top and bottom; some of the balsa wing seats may have to trimmed locally, to allow clearance around the servo arms. The top hatch is made from 1/4 in sheet laminations and secured by a c'sk self tapper through a ply plate between the fuselage sides. It's a good idea to fit the tow hook, even though it's a 'chuckie', because in larger fields you can use a mini-bungee; in fact, the more lazy of us may wish to use the bungee all the time.

I have tried sticking pieces of wet and dry to the fuselage sides, to improve grip for the 'chuck' launch, with varying degrees of success (not so good when wearing gloves!). I prefer a piece of dowel sticking out of the left hand side of the fuselage (I'm a left handed hand launcher), which gives your first finger a purchase for that bit of extra 'oommph', when lobbing it. Location is dependent on hand and servo size, so final position can only be determined when all the bits are together.

Finishing: Make it nice and bright! It's dull old Winter, remember! Use Solarfilm or lighter covering as is your wont, and keep it tidy - small models look so much better if they are neatly presented. Balance is all important - you have very little room to move things about, so the CG can only be changed by adding weight at the front or the back - keep it at extremis to minimise dead weight. and make sure the CG is spot on!

The first lob is the sweetest: The fun part! You've tested the gear, of course, batteries topped up, and made sure the movements are free and the throws are the recommended amount, in the right direction? - Obviously! you may say, but we've all connected it up wrong, at some time - it pays to check before each launch. A gentle level lob, on a clear, crisp and windless day, to check the CG position. She is sensitive to both rudder and elevator, requiring minimal deflections to bring her round. A good hard fling at about 45° took her up to about 30 ft (I'm beginning to show my age - there would have been a time when it would have been 50 ft!) and a dab of down to flatten her off at the top, settled her in to a 360° circuit, to land at my feet. What I need now is a little breeze. She'll be good off the slope too, with nice penetration. So now it's either time to get into training to build up my throwing arm, or make up a bungee - now where is that fishing line and curtain ring?"

Lobbit HLG from Christmas 1997 Radio Modeller (I think they'd switched to the volume/issue system by then with 13 issues a year, hence Christmas rather than December). 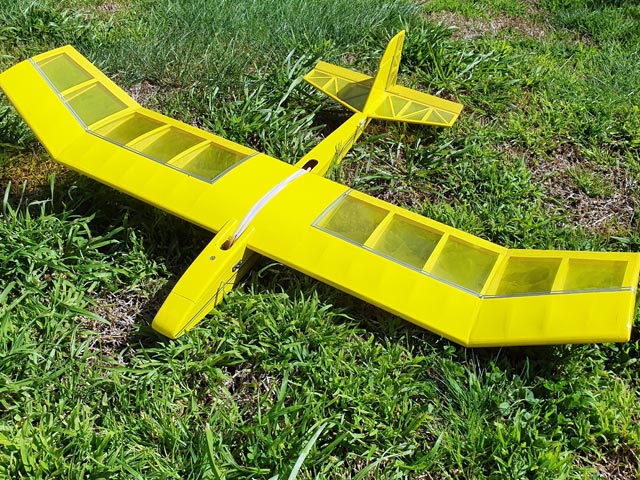 Hi Oz, Please find attached some photo's for plan OZ12421 Lobbit, by Ken Sheppard [main pic, 005]. This is a slightly stretched version, but otherwise built per plan. I actually have the original plans and edition of Radio Modeller in which it was published. Model was built back in October 2012.
Keep up the great work. Cheers from Melbourne, Australia,
Gavin Jansen - 02/09/2020
Dear Oz! Hello from Russia! My name is Kirill Sukholenko. I would like to share some photos of Lobbit glider model [006-007]. For more info: My version of Lobbit model is build from foam and plywood, has wingspan 110mm, elongated nose, bevel along the trailing edge of the wing and flight weight 0.54kg.
Link on flight: https://www.youtube.com/watch?v=VoxixRUe-RQ
Yourth faithfully, with best regards.
Kirill Sukholenko - 26/10/2020
Hi Outerzone, Would you like to include a couple of pictures of my newly finished Lobbit [008-010]. This is the second Lobbit I have built, and it's a delight to fly on the slope. Best regards,
Martin Pope - 29/12/2020
Add a comment