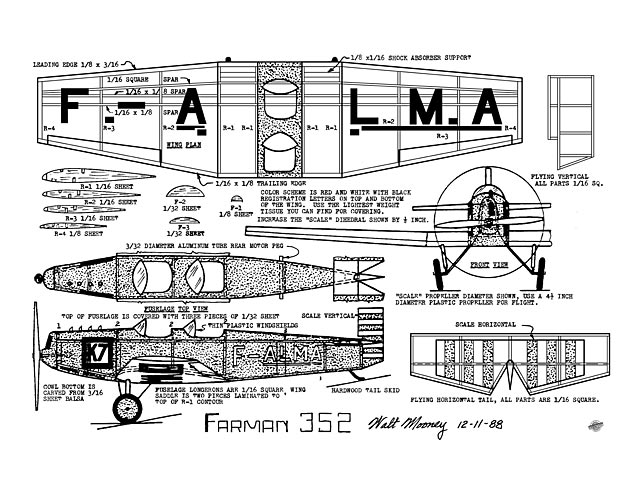 We go back to the early '30s and the Tour de Europe for this colorful French lightplane. It's an easy-to-build low winger that will consistently turn in flights of a half-minute or better

The three-view for this airplane was found in the Polish book Miedzynarodowe turnieje lotnicze 1929 to 1934 by the Polish author Marian Krzyzan. Marian sent me a copy as a gift, and it is a delightful addition to my library, which will undoubtedly provide an inspiration for other models. This book covers the aircraft designed for and flown in the Tours of Europe during the early thirties.

The airplanes flown in these competitive tours were quite often painted in an interesting manner and the model is made with the authentic color scheme. The tail surfaces have red and white stripes. The fuselage is red with white registration letters. The wing has black lettering. The competition number 'K7' is black on a white square surrounded by a black border. The color scheme adds to the charm of this model.

The model was originally built with the scale tail surfaces in the hope that it might be made to fly that way. It was a fruitless hope, for with the scale vertical it would swap ends in the first three feet of flight. With the vertical tail doubled in area, it would fly with the scale horizontal but was not very stable. So a larger horizontal tail was also built, and the model flies quite well, getting a duration of 36 seconds as a best official flight at a recent contest. The model weighs 13 grams complete with a 14 inch loop of 3/32 rubber and nose ballast to put the balance point at the center spar.

This model is built in the time-honored stick and tissue manner. Two side frames for the fuselage are built directly over the plans. The only tricky part of this operation is making the wing saddle, that is, the parts of the lower longerons where the wing will be located. This part is laminated out of two pieces of 1/16 sq. balsa. Simply push in a line of pins at about a 1/4 inch spacing along the contour that will match the top of the main wing ribs and bend the two sticks to match the shape, pinning them in place after putting some cement between them. Now pin the bottom longerons onto the plans, cementing them to the ends of the laminated parts. Now pin the top longeron in place on the plan and cut and cement the uprights in place. The uprights at the very front and above the wing leading edge are 1/16 x 1/8, and the one for the rear motor peg is 1/16 x 1/4. Make the 3/32 diameter holes for the peg before you cement them in place so it can be done with the uprights laid one on top of the other. The best way to make the holes is to use a sharp knife point to sharpen the end of a piece of 3/32 aluminum tubing and then to twist the sharpened end through the balsa. The parts should be held down securely on a piece of scrap balsa or cardboard so the tool makes a neat hole, rather than splitting out the far side, which will happen if the parts are holed with the part held in the hand or otherwise unbacked.

When the two side frames are thoroughly dry, remove them from the plans and separate them from each other using a thin blade, then assemble the basic fuselage box using the top view to obtain the proper crosspiece length. Note that at the very front the 1/16 x 1/8 crosspieces are not the same length; the top one is shorter.

After the basic box is completed, add the top formers where they are shown in the side view. Then using soft 1/32 sheet balsa (or thinner sheet or bond paper, if you so desire) cover the top of the fuselage and then carefully cut out the cockpit openings. From the nose to the wing leading edge on the bottom the fuselage is covered with a piece of 3/16 sheet balsa, which is carved to the contour shown in the front view.

The nose block is carved to shape from block balsa and is backed with a piece at least 1/8 thick that is a snug fit in the front of the fuselage box. Use a piece of 1/16 diameter aluminum tube or a Peck-Polymers thrust button as a bearing for the wire propeller shaft. The model in the photos is flying with a 4-3/4 diameter Peck-Polymers plastic propeller.

Start to build the wing by cutting out all the ribs required. Pin the center spar down to the work board. Now put the trailing edge in place; it should be directly on the work board for the center four ribs and at each tip rib it should be blocked up 1/8 inch. Now cement all the ribs in place and add the leading edge. Block the leading edge up as necessary for cementing to the front of the ribs. Let this assembly dry completely. Remove it from the plans and crack the leading edge at the outer 'R-1' ribs to give the wing the dihedral shown in the front views. Cement the dihedral joints and then add the two top spars to the wing assembly.

The horizontal and vertical tail parts are all 1/16 square balsa, and the assemblies are built flat directly over the plan.

Decorating this model is the key to having an authentic replica of one of the 'Tour de Europe' contenders. The article accompanying the JN-1 Peanut plans last month covered in detail how to make tissue color trim. The methods used will be used for the FARMAN F.352.

Cover the entire model with white tissue. Water shrink the covering; just fog on a light spray of water and let it dry. Now give the model two coats of thin dope.

All of the colored areas are reproduced by double covering with colored tissue. The most difficult area is on the fuselage sides. Get a piece of tracing paper and make a tracing of the fuselage side color pattern. Now take two sheets of red tissue and place them under the tracing and cut out the letters and the white square for the competition number. One of the resulting pieces will be suitable for double covering the left side of the fuselage. The other piece will need to be cut into a couple of pieces so that the lettering can be turned around for the right side. Make sure you save the center of the A's to fill them in on the double covering.

The other markings are black and can be cut from two layers of black tissue and doped in place where they are required.

The windshields were cut from the plastic packaging that surrounded a couple of C cells. They can be readily made from thin, flat plastic, but it is easier if your plastic already has the right curvature.

Use standard adjusting techniques for flight but make sure the model balances on the center spar. Adjust gliding flight with tail setting and powered flight pattern with thrust line changes."

Quote: "Peanut Farman F.352 by Walt Mooney from Model Builder, March-April, 1989. This plan features completely re-drawn wings as well as horizontal and vertical stabilizers, to correct for distortions in the original scan." 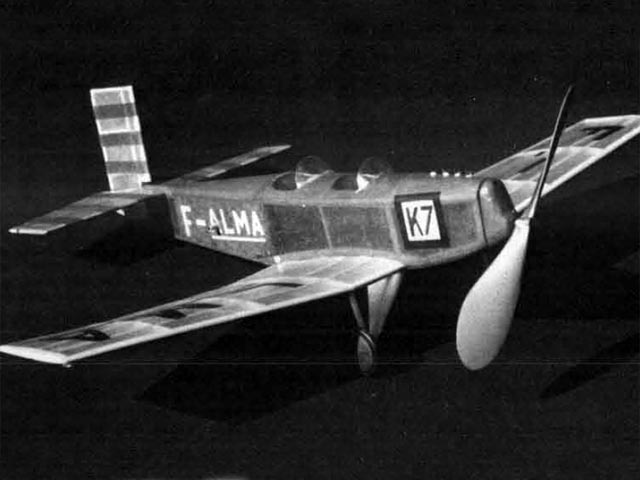