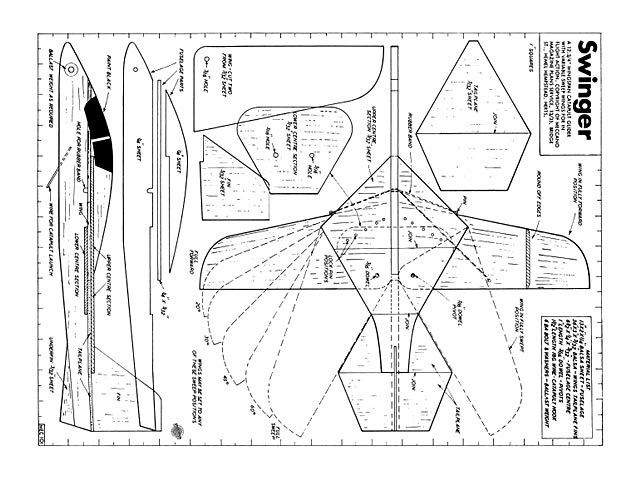 Quote: "Build something different for a change. The SWINGER. This model will never fail to attract interest wherever it is flown.

HERE'S SOMETHING different in catapult gliders - a swing-wing model on which you can set the wings at six different sweep positions and check the effect on performance. It's quite easy to make, but the method of mounting the wing panels on a pivot pin (short length of in. dowel) is unusual, so study the plan, photograph and instructions carefully.

Note the 3/16 diameter holes which have to be drilled in (i) each wing panel; (ii) the upper centre section; and (iii) the lower wing centre section. These must be positioned accurately.

Now comes the part where you have to be careful. Slide the wing panels into the gap between the upper and lower centre section pieces and see that they fit snugly and that the pivot holes line up. Then push a short length, say 1/2 inch, of 3/16 hardwood dowel through the pivot holes and check that each wing panel will swing easily backwards to its full sweep position.

When satisfied that all is well, mark the exact length of the dowel required to fit flush, remove each dowel and cut off to this length, then reassemble permanently.

Wing sweep rigging: Pins are now pushed into the leading edge of each wing in the position shown on the plan and a rubber band stretched between the pins, passing through the hole in the fuselage. This band should only be strong enough to hold the wings in the full forward sweep position.

On the plan you will notice five holes marked on each side of the upper centre section for lock pin positions. These are the positions at which pins are inserted to hold the wings at any required angle of sweep other than the fully forward position. For instance, to set the wings for 20 degree sweep, pull back both wing panels and insert pins in the first hole each side. Releasing the wings will then allow them to pivot back against these 'lock' pins to stop at the 20 degree sweep position. In a similar manner you can set the wings for 30 degrees, 45 degrees, 60 degrees or full (72 degrees) sweep.

Trimming for flight: For initial flight trimming use the full forward wing position and add ballast to the nose as necessary until your model will perform a floating glide. With this sort of trim it will loop when catapult launched. Now try flying with 20 degrees sweep. This gives you a faster flight with more height from the catapult launch, followed by a fast glide. The 30 degree sweep position will give you more height still, but an under-elevated glide. With 45 degrees sweep or more you will have to remove some ballast weight in order to stop the model diving.

With adjustable sweeps you can alter the flying characteristics of your model at will - eg from aerobatics to high-speed flight - but wouldn't it be nice to be able to launch the model with the wings at full sweep for maximum height from a catapult launch and then have them move forward to full forward sweep for a long, floating glide? Well, if you have made your model accurately and the wings are pivoting very smoothly and easily you should be able to achieve this, simply by cementing a 12 inch length of paper streamer to each wing tip." 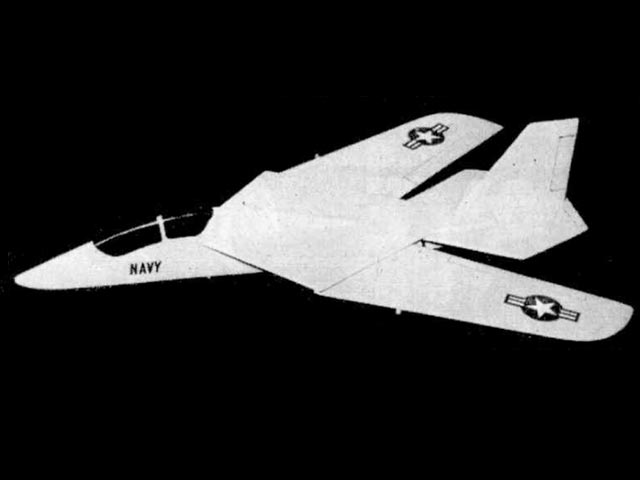