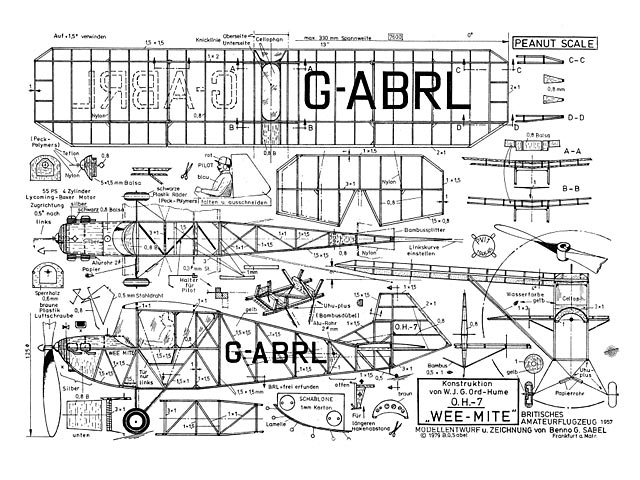 Is this plan really scale? There is nothing on the internet to support it. G-ABRL was a Robinson Redwing. There was a Parmentier OH-7 "Wee-Mite" built in the 1930"s which was G-ACRL but that was a parasol wing job with open cockpits. Can anyone throw any light on the design depicted in this plan?
David Foster - 19/08/2020
This aircraft was a 1956 design project by Arthur Ord-Hume based on a Luton Minor. It was never built.
RFJ - 19/08/2020
O.K. thanks for that but looking at this German plan I see little evidence of Luton Minor parentage whereas Walt Mooney's plan Ord-Hume O-H 7 (oz3888), which also purports to be of the Ord-Hume OH7, has obvious Luton Minor features. So which one is correct, or did Ord-Hume design two different aircraft, both designated OH7?
David Foster - 19/08/2020
Think it looks like the Hummel-Baby (oz8171) plan, non scale ?
Ray - 20/08/2020
Well spotted Ray! The two are virtually identical. So I wonder why someone has attempted to pass off this peanut sized job as a scale Ord-Hume OH7 and also given it the additional "Wee-Mite" label from an entirely different aeroplane?
David Foster - 20/08/2020
According to Arthur W J G Ord-Hume himself, in his book British Private Aicraft 1946 - 1970, the Popular Flying Association asked him to "design something that was cheap and easy to build, would satisfy the latest airworthiness requirements and could be sold as a set of plans." The basic design and structural analysis was finished in 1955. The aircraft is basically a Luton LA.4a with the curves straightened out and a cabin added. The correct name is Ord-Hume O-H4B Wee Mite. A cockpit mock-up was made, and a one-sixth model was displayed at the 1955 Home and Handicrafts Exhibition in London. The O-H 7 is a Luton Minor with a cabin fuselage, built as an experiment. Can a model of a designed but never built airplane be called a scale model? In any case, the model(s) have good proportions and will no doubt fly well.
hjsaxe - 20/08/2020
Add a comment