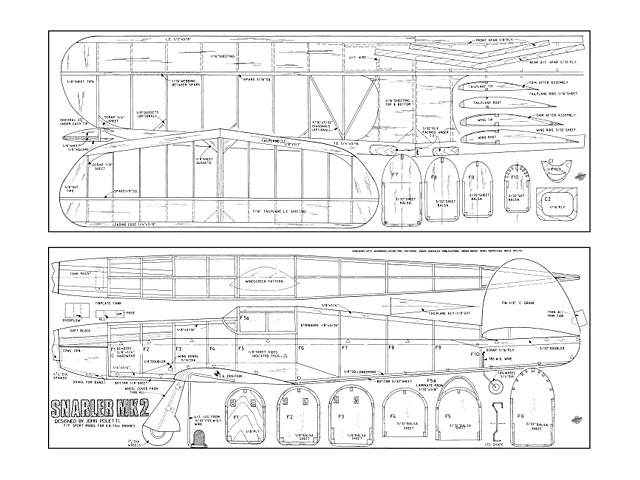 THIS model was designed to be representative of a typical WWII fighter and yet be easy to build, tough and docile to trim. I have built two Snarlers, the first now being 20 years old, so I can safely say that the design aims have been met! While perhaps not a 'first' F/F power model, it would be quite suitable as a second. Snarler lends itself to a huge variety of colour schemes, and minor changes of tip shapes, wheel covers and so on. Imagine it dressed up as a Mustang, Hurricane, Dewoitine D520, Tony, Yak 9, Heinkel 100D or whatever takes your fancy.

My second Snarler was built for a local contest known as 'Gotch'. I have had little success in tracking down the beginnings of this contest. Any one out there know? The rules are for F/F non-scale models. Static points are awarded for contestant's own design, colour scheme, detailing and workmanship, while flying points are given for climb, transition to glide, glide and landing. Bonus points are given for successful ROG take-off, with the highest bonus for success at the first attempt. This contest is one of the few where it is difficult for someone else to beat you with your own design!

Snarler Mk1 is powered by a DC Spitfire, while the Mk2 has an ME Heron. Any 0.8 to 1.5 cc should do, although it would have to be kept light for a point-eight. Medium grade balsa was used except for the wing and tail sheeting, nose blocks and nose planking, which were soft. I used PVA glue throughout, except for epoxy on the engine bearers and undercarriage.

Building the fuselage: Cut out the two 3/32in sides (marking the former locations on the inside) and the wing and tailplane doublers. Check the bearer spacing for the engine you're going to use and then cut out the fuselage formers. Cut the stringer slots in F6 and F10 only at this stage. Glue the doublers. 1/8 sq longerons and 1/4 in sq nose longerons to the sides. Epoxy the engine bearers to formers F1, F2 and F3. Make sure this is accurate, noting side and down thrust. (Some temporary gusset templates may help here). When set drill bolt holes for the engine, and glue the nuts to the bearers. Now glue the sides to the bearer unit, join at the tail and then fit the other formers.

Use a straight-edge to mark the stringer locations using the slots in F6 and F10 as a guide. Cut the slots and fit the rear stringers. Relieve F7, F8 and F9 between the stringers using sandpaper wrapped around a dowel. Add the 3/32 and 1/8 bottom sheeting, and round off the edges. Fit any cockpit details you want at this stage.

Laminate the canopy frame from 1/32 x 1/8in and glue to the back of F5. Add the dowels for wing and tail bands. Cut out the two formers Cl and C2 and a piece of soft block for the cowl. Glue cowl formers to the block, and then tack glue cowl to fuselage. Carve outside of cowl to shape, remove, and hollow inside to suit motor. Then cut out the cooling ducts, comp screw and needle valve holes. Fit a 1/l6in dowel for the cowl retaining band.

Wing Cut out root and tip templates from 1/32in ply or thin aluminium. Cut enough rectangular 3/32in blanks for the ribs. Pin templates to each side of stack of blanks and carve the ribs (one stack for each wing panel). Pin LE, lower spar and TE down onto plan. (Note these only reach the tip rib). Glue ribs and tips in place. (Tilt the root ribs 9 degrees for the dihedral). Fit 1/16in webs between ribs, and then fit top spar. Remove from plan. Cut out the ply dihedral sub-spars. Bend the 3/32 undercarriage wires to shape and bind to the sub-spars, but do not glue yet. Cut away ribs as necessary, and epoxy sub spar assembly in place. Now epoxy over the binding to hold U/C in place. (You can leave the U/C off if you like, but don't leave out the ply spars). Now sheet the LE top and bottom with 1/16in and also behind the spars for the first rib bay only. You can also fit 3/16 x 3/32in diagonal bracing between the ribs, from the top spar to the trailing edge.

Tailplane and fin Cut out tailplane root and tip ribs, and rectangular blanks for the others. Build tailplane on plan as for wing. Then carefully sand rectangular ribs with a long sanding block to match root and tip. Remove from plan and sheet LE. Fin is simply cut from 1/8in 'C' grain balsa. Fit a' thin aluminium trim tab to the fin.

Covering and finishing While you may prefer your own favourite covering method, what I do is as follows. Sand entire airframe smooth. Give several coats of

50/50 dope thinners, sanding between coats. Cover all open areas with white lightweight tissue and give one coat of dope. Then cover entire airframe with lightweight tissue, so that the open areas are double covered. It helps to spray the second layer with water and smooth in place first. Use dope as the adhesive, brushing through the tissue. The resultant blushing can be removed with lacquer thinners.

Check for warps in the wing and tail and steam out if necessary. (About 1/4in washout in each wing tip is OK though). I used coloured tissue for the wings and tail, while the fuselage and fin were sprayed with automotive lacquer. You could use car touch up aerosols. Spray or brush on any markings as desired, using a combination of masking tape, 'contact' film and, a spring-bow pen, or you could use commercial transfers.

Final assembly: Glue the thin acetate canopy pieces in place. Framing can be simulated with doped paper strips stuck on with contact adhesive. Make up a small tinplate tank as shown on the plan, or use a small 'team-race' tank. This is fixed to the bearers with small PK screws. Solder a wire hook to the tank to take the cowl retaining band. You may need an extended comp screw. I used a bolt with a strip of tinplate soldered around the head. Solder brackets to the U/C wires and bolt thin aluminium wheel covers in place with 8BA bolts and nuts. Fit wheels and retain with soldered washers. You can also fit any WW2 fighter paraphernalia such as a pilot, exhausts, guns, radiators, bombs, rockets, bulges and blisters and so on, but don't overdo it. My Snarler weighs 13.5 oz all-up.

Glue fin between centre tailplane ribs. Temporarily pin tailplane key to tailplane and band tail to fuselage. Check fin alignment, and then glue key to tailplane. Band wing and tail in place, and line wing up so that it has equal dihedral each side, and is square to the fuselage in planview. Now mark the wing so that it can always be fitted in the same place. Fit engine and spinner. Use an 8x4in prop. Finally check that the CG is as per plan. If not, adjust by adding weight to the nose or tail.

Snarlers scrambled: Now the fun begins. Set the trim tab to the left about 30 degrees. Test glide over long grass. Glide should be fast and flat, with a hint of left turn and trace of stall. Trim by adding packing to the tailplane. When satisfied glue packing in place and try a hand launch on low power. The model should turn gently to the left in an extended powered glide. Slowly increase the power each flight correcting any excessive turn with the trimtab. No thrust line adjustment was needed for my model, but an increase in downthrust might be necessary.

Once full power is reached you can try a take-off. Mine runs nice and straight ahead as it gains airspeed. It then drops the left wing and dives gently beating up the launch point before climbing in safe left circuits,. Glide is to the left also, and it will land on its wheels if the surface is reasonable Hope you have as much fun with the Snarler as I have had with mine!"

Note this planfile is derived from the raw scan by Aeromuddle on HPA (see datafile). This one here has been cleaned, alinged and stitched. 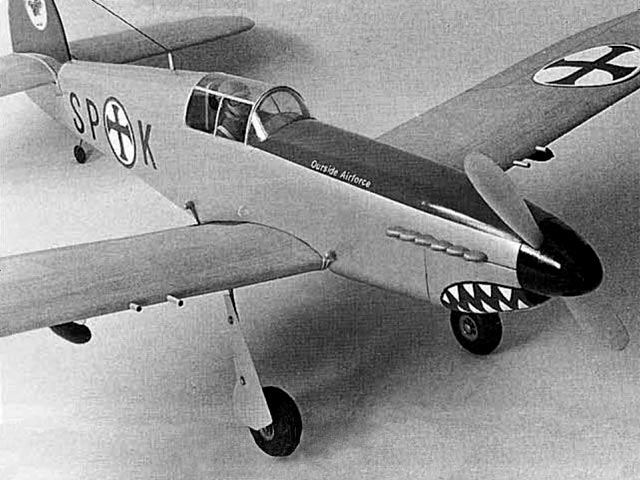