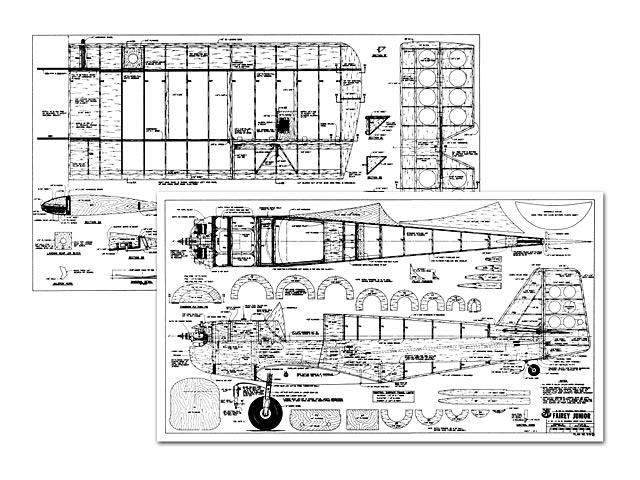 Quote: "Following WWII, Fairey Aircraft was going to make available a small aircraft for inexpensive flying. This is our model presented in 3-1/2 in = 1 ft scale and perfect for the .90 to 1.20 four strokes - especially the OS 1.2 Twin. Fairey Junior, by Dennis Tapsfield.

When I became the proud owner of an OS Gemini twin, I felt that it would be a shame to hide it under a cowling! So I began to look for a suitable subject to model. It needed to be a fairly simple machine (not too much detail) powered by a flat twin engine, and reasonably attractive. These requirements, of course, did narrow the field of choice very considerably; however, after a fair amount of research, the Junior was decided upon.

There were two prototypes. One was registered OO-TIT (there would appear to be some flexibility in the registration of Belgian aircraft at that time, 1948!). It was powered by a Walter Micron inline air cooled engine of 60 hp.

The second aircraft was registered OO-ULA, and was a tribute to the Ultra Light Association of the time, and was powered by a flat twin JAP engine of 37 hp, and is the one that I chose to model. It was presented to the designer, M. Tips, by the association. A scale of 3-1/2 in to the foot was about right, since it produced a wing area of ten square feet. Assuming an all-up weight of around 15 pounds, the result would be a very acceptable wing loading of about 25 ounces to the square foot and, in turn, a very scale-like speed. As luck and planning would have it, things turned out just right, and the model is very easy to fly, stable, having a fast rate of descent when slowed down, making it a good small field machine.

If your appetite has been whetted, we can start construction. I do not think that a blow by blow instruction sheet is necessary, or wanted; the model is easy to build and I will start with the wing.

It is now straightforward completion to drawing. Note that the ailerons are built in with the wing and separated after completion. Do use one servo for each aileron, as they are so large. I would suggest that you have a word with the technician who is familiar with your radio, to make sure that it will tolerate the extra length of servo lead necessary. Most modern sets, like my Fleet, are okay but better safe than sorry!

Do take care not to build a warp into the wing. The 'D' box LE makes a very stiff structure and it will be difficult to rectify! When you have built both wings, join the two together (be sure they are true). I find that a careful look at the rear of the wing from a few feet away tells me more than all the measurements. Sheet the center section and apply the finishing touches.

Fuselage: Cut the 1/32 ply and the balsa sides to shape (do not glue together until they have been bent to shape) and cut out all the formers. Wet the ply and balsa sides at the point where they are bent. Lay them on a flat surface and, with either weights or clamps, hold each one down, and ease the end up carefully so that the bend occurs where shown on the plan. When they are dry, they can be glued together using a contact cement. Believe me, this is the only satisfactory way to do it! Use slow epoxy to join the sides using the firewall and formers F1A and F2. Add the angle gussets and allow to set. Install the fuel tank box and complete the rest of the fuselage.

A few points to watch for are: Do not forget the fin post fits between the sides at the rear; make sure all the stringers run straight (nothing looks worse than wavy lines under the covering!). I suggest that you leave the stringers until last so that you can get in to install the pushrods and a nylon tube for the radio antenna, and any other bits and bobs.

Tailfeathers: These are built using the well-known method of profile and rib. The large lightening holes are cut using the sharpened end of a tube or tin can; do not chicken out on the trailing edges or you will find that the covering will adhere to the flat profile between the ribs and spoil the effect completely. Cut out the horns from old fiberglass printed circuit boards. I find it is wonderful material for this job and, providing it is roughed up, epoxy bonds it well, and I have never had a breakage. Be sure that you inset the 3/8 balsa on the top and bottom of the stab where shown, as this is the area to be glued to the blocks later after covering. You can cut these blocks to shape now so that the stab sits in correctly.

General: The telescopic landing gear can be made to drawing, or purchased from: Airtract (UK) Ltd, 5 Burnside, Rolleston on Dove, Burton on Trent, England DE13 9DW. If you propose using a single cylinder engine, consider making a dummy cylinder for the opposite side, with alternate laminations of ply for the fins, spaced with balsa. A very convincing replica can be made in this way.

By this time you will have assembled the model, and surveyed your handiwork. Carefully cheek over the airframe, to ensure that there are no lumps or bumps that will show through the covering. I normally install the radio while building the model to avoid the otherwise inevitable dings that occur if you do it when the model is complete.

Check that the control surface movements are correct to drawing, ailerons 1-1/2 in up 1 in down; elevator 1 in up and down; rudder 2 in each way. If you are satisfied, the model can be covered.

I used opaque white Solartex for mine as it's very easy to use and does not need any preparation of the airframe. I gave mine one thinned coat of car cellulose (pale primrose), the registration letters were cut from mid-blue Solarfilm, and the cowl design was matching enamel. Be very careful to position the Solarfilm letters accurately, since once they are even touched with the iron, removing it (should it be wrong) will surely leave the pigment on the fabric! The finished model was then given two thin coats of one pot polyurethane clear varnish and the result is very pleasing. Whatever you do, the finish must be fabric to be authentic. The words 'Fairey Junior' were letterset.

The instrument panel is cut from scraper board, available from your local art shop, and the dials carefully scratched on it. The bezels are pieces of tube about 1/32 long epoxied on, or you can go the easy way and buy some! The pilot I made (it's surprising!) looks just like the guy who flies my BD8!

Now check the balance point! You will probably need some weight in the nose. I used a 1.8 AH nicad for the radio, mounted just behind the firewall, plus a single 7 AH nicad for on board glo ignition. A master switch and a micro switch, triggered by a notch cut in the periphery of the throttle servo output disk, were so arranged to switch on at fast idle and below. This allows engine starts to be made without external batteries and ensures a reliable idle.

Flying: I used an 18 x 6 wood prop cut down to 17-1/2 on the Gemini. Whatever engine you use, a 6 in pitch will be about right, just match the diameter to the engine. Satisfy yourself that everything is correct, taxi around for a while to check out the engine and if nothing has dropped off, top off the fuel tank, and get ready to enjoy the first flight. Taxi out to the strip and turn into wind; a final check of the controls, and holding in some up elevator, gradually open the throttle.

You will find it necessary to hold her straight with some right rudder. Ease off the elevator as she gathers speed, lift her off gently, and you will find that you can now ease off the rudder. Now enjoy the results of your efforts. You've done it all before? Then have some fun. You will find that the model will perform simple aerobatics such as inverted flight, spins, loops, rolls, stall turns, etc.

When you are ready to land, set up the approach and keep some power on. If you don't, you will be caught out by the fairly rapid, though safe, rate of descent that develops, and you will undershoot the runway. The landings are good and easy, with little tendency
to nose-over, and with the steerable tail wheel, the ground handling is really something. I have the reputation of being lazy enough to start the model by my box, taxi out, take-off, fly, land, and taxi back to the box! I guess it's because I've done all the work building the model!

If you decide to build the Junior, I hope that she performs as well for you as she does for me. The Junior took First Place for Best Scratch-Built at the Large Model Association two day meet at RAF Watten in Norfolk, 11th-12th June '83. Happy three pointers!" 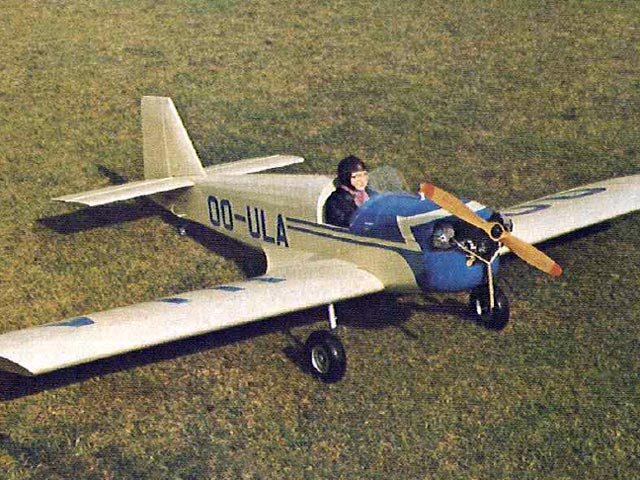