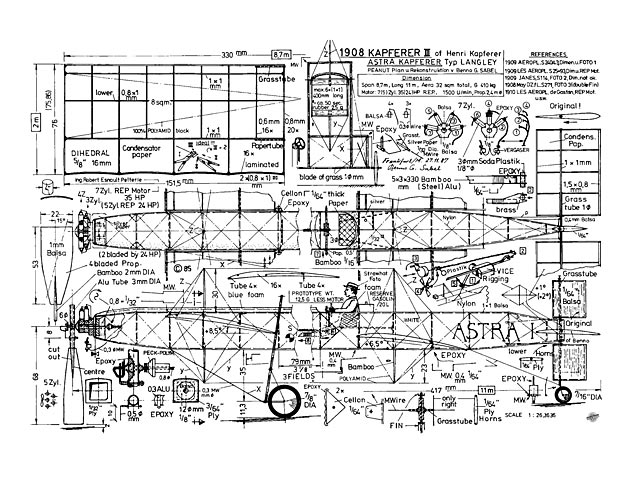 Quote: "A rare and certainly seldom-modeled monoplane, the Astra was an interesting tandem flying machine developed in France in 1908. The author's model flies well. Astra Kapferer, by Benno G Sabel.

Henri Kapferer was one of the engineers who constructed the Air Ship 'Ville de Paris,' that was built by the Astra Company, Billancourt. It has been my wish to show this interesting tandem flying machine, dating from the French pioneer period (1908) to a broader hobbyist public. I had four bad photographs, but exact measurements and data, so that the model should be a 95% correct reproduction of its real counterpart. This reconstruction is easy to build, so there should be no difficulties in constructing it. Two different versions concerning the REP motor are given; one with 5 (24 hp) and one with 7 (35 hp) cylinder.

The weaker engine first used a two-plated propeller; the stronger used a four-plated propeller. Good drawings of the REP motors exist, but they don't show the arrangement of the exhaust pipe. The undercarriage might be not 100-percent correct, as there is no good photograph showing it. It looks a bit like a Voisin type.

Concerning statics, the original with its long fuselage is a quite ideal design. The model also shows good flying abilities. Whether the original did fly I don't yet know; unfortunately there is no photograph showing the machine actually flying. Perhaps the US has a hobbyist who will build a life-size model! It would surely be a great sensation on aviation days.

My model did its first flights at the 1985 contest in Flemalle, Belgium. Because of slightly twisted wings, the flights were no longer than 37 seconds. Later, in a 1987 contest in nearby Frankfurt, the results were slightly better, but the model soon was damaged in a crash on the lower ceiling. I think that the flying limit will beat about 80 seconds, if light weight and long rubber are used. I do not recommend moving the rubber peg further back, as the model would then need ballast in the front. After building my model, as you can see on the photograph, I discovered on a rare back view photograph that the plane had actually a second lower fin. The older photographs showed the plane from an unfavorable angle with the lower fin in darkness. Bill Hannan in a letter to me considers the Astra Kapferer's fin very small, and he was right; it was just the upper part!

My technique for winding the rubber, as shown on the plan, I can only recommend. I use it without risk for nearly all my models."

M & S - Here's a rather complex, highly detailed plan of an aircraft from the early days of flight: the 1908 Astra Kapferer. Plan is by Benno G. Sabel, published in the August, 1988 issue of Model Builder. This is a beautifully rendered plan, especially considering it's Peanut scale. I have another, equally nice plan, by Mr. Sabel, that I intend to submit at some later date.. 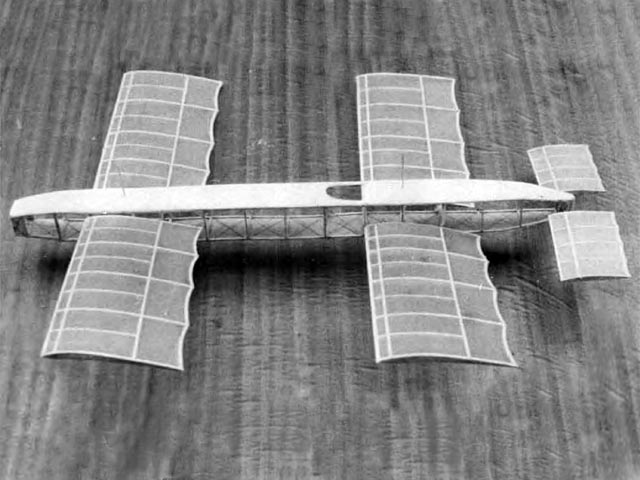 There's a hint of detail on the R.E.P. front view that suggests a CO2 motor may have been considered - Item 4 - or some strange scale intake/exhaust layout. Anyone care to speculate if electric or CO2 is possible?
Marty Hillier - 17/08/2020
Item 4 is actually cylinder no. 4 of the seven cylinder R.E.P. (Robert Esnault-Pelterie) fan shaped engine: four cylinders in front and three behind (see the side and top views to get additional perspectives of the engine configuration). The small curved line to the top right of this cylinder represents a portion of the intake manifold, illustrated more fully to the right. As far as electric or CO2 power goes, if you can envision it you're more than halfway to making it a reality.
Jan Novick - 18/08/2020
Add a comment