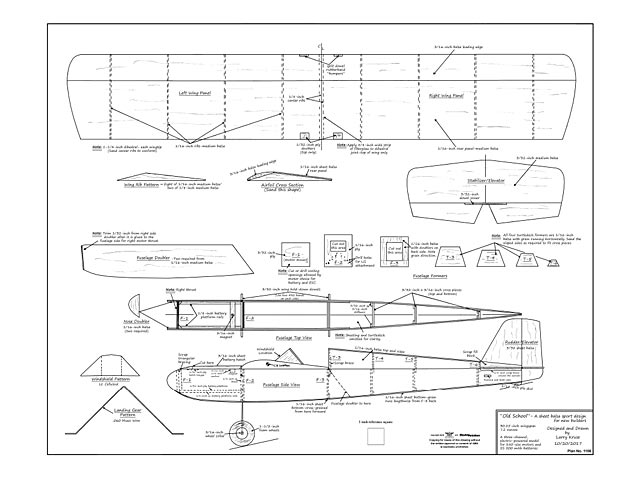 Note this plan is a free download available from the Model Aviation site at http://www.modelaviation.com/old-school where it appears along with the full article text and some great build pics. Also a free download of the plan in tiled format.

The idea for this model came from a telephone discussion with Model Aviation’s Editor-in-Chief Jay Smith, about a 'beginners' theme he was planning for the May 2018 issue. The discussion centered around a design for those who had entered the hobby by way of RTF or ARF models, but who now wanted to build something of their own.

Central to that conversation was designing an airplane that would teach traditional building skills to the uninitiated, but would also be easy to build for anyone, regardless of the experience they brought to the project.

Having mentored five teams of high school-age students during the last five years as they built airplanes for a statewide competition, several things had become apparent to me. Because most of those students had never before built a model airplane, it was evident that one problem area was the daunting complexity of many of the available wood kits. That spoke to the need for simplicity.

They were not initially adept at handling and cutting balsa wood, so a small number of large parts with ample gluing surfaces needed to be incorporated in the design. Finally, covering a built-up framework with today’s heat-shrink film posed many problems. That led me to an all-sheet-balsa model that would essentially be complete after it was assembled and sanded, thereby eliminating some of the complexity.

I have built three of my late friend Dee B Doc Mathews' airplanes, originally kitted by Ace R/C and intended for four-stroke engines. I have never been so pleased with a series of designs in more than five decades of model building, and I was certainly influenced by their elegant simplicity and functionality.

I tried to incorporate those same principles in the little 30-inch shoulder wing aircraft that I sketched, requiring the builder to perform the time-honored tasks of the hobby - learning to cut balsa; assembling and gluing together a straight, well-aligned framework; and sanding it to an acceptable shape and smoothness after it was built.

These are all 'old-school' practices and techniques that beginning builders could master and would serve them well as they became more than simply model consumers. In short, that’s how Old School began as I sketched out lines to make the idea a reality. The name just seemed to fit.

Preparing to Build: Getting the necessary wood, supplies, and powertrain together before the actual construction begins saves time at the start of any building project. Study the plans to determine what sizes of sheet and stick balsa, wire, plywood, and miscellaneous items, such as control horns and wheels, will be required to complete the model. It’s also a good time to acquire the motor, ESC, and battery. I used the Great Planes RimFire 250, Silver Series 8-amp ESC, a 7 x 4 APC Slow Flyer propeller, and a 2S 500 mAh LiPo battery in the Old School; however, any equivalent power system would work.

Opting for a larger system would be problematic because of the increased weight and increased wing loading. In model building, weight is the enemy. Part of keeping the weight down is using only two or three thinned coats of clear nitrate or clear Sig Lite-Coat dope, and sanding lightly between coats.

The target weight for the airplane, including the power system, should be 7 to 8 ounces and no more. The prototype weighed 7.2 ounces, which was a comfortable weight for the setup.

Pre-Kitting the Airplane: Another time-saving technique is to 'kit' the model - that is to cut out all of the parts before starting the building process. As the photos show, all of the parts are simple and easy to cut out by making poster board templates to trace onto the appropriate-size balsa sheets. A soft lead pencil is better than a pen for tracing so that you don’t leave ink residue that’s hard to sand off.

The basic fuselage pieces are shown. Note the 1/16-inch doublers on the rear of former F-3, and the doublers for the fuselage sides. Follow the instructions in gluing up the fuselage side doublers, including trimming 1/32 inch off of the right side fuselage doubler after it is installed for the required right thrust, and waiting to glue in the nose doublers until after the firewall is epoxied in place.

A single-edge razor blade or X-Acto knife with a sharp blade will work well for cutting out the balsa parts, but I prefer to use a scalpel. There are only two plywood parts: the fuselage former F-2, which is 1/16 plywood, and the motor mount is 3/32 plywood. Both can be cut out using a razor saw, but a jigsaw or band saw will make for easier work.

Note the holes that are cut in the motor mount for cooling purposes. The holes don’t have to be drilled to the pattern shown, but air openings for cooling will need to be made, depending on what motor you select..." 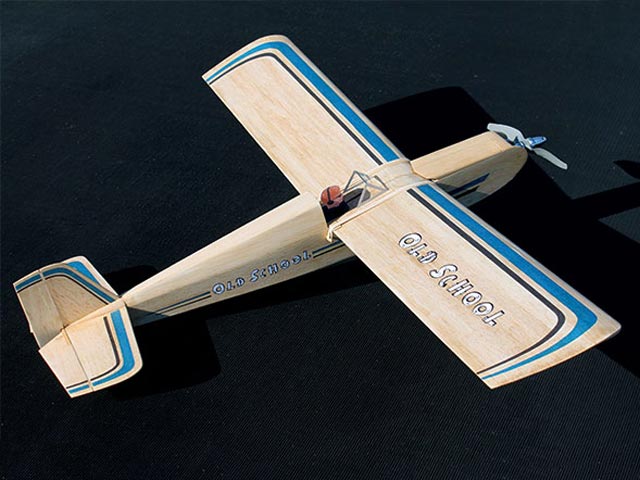