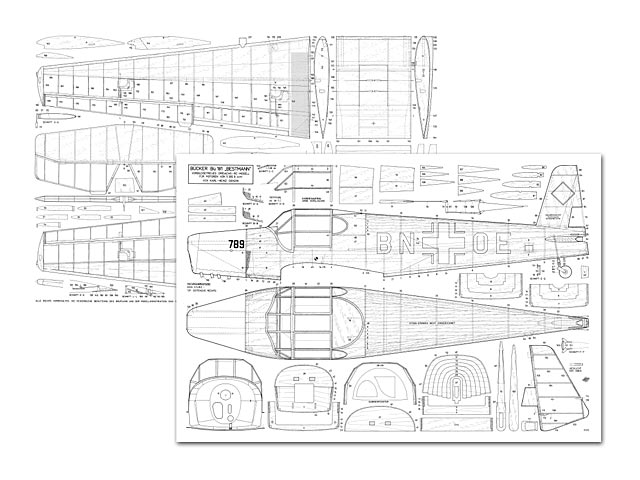 Designed to a German Air Ministry specification, the Bestmann was a near perfect basic trainer. Introduced into service in 1938, steadily increasing numbers of Bestmann were allotted to GAF Pilot Schools and from about mid-1941 each GAF-pilot got his basic training on the Bestmann. At the same time the Bestmann was license-built in Sweden for the Swedish Air Force.

Up to 1941 all German Bestmann were painted light grey over all with black registrations, thereafter they received the standard trainer camouflage pattern with dark green tops and light sky blue undersides. In my flight log I have the registrations BN+0E, CB+WO, DN+BE, Gl+HZ and PE+111, which all belonged to FF5 A/B 11 Sch6nwalcJe, one of the first GAF Pilot Schools.

After WW II substantial numbers of Bestmann were built in Czechoslovakia as the Zlin 381. Even today, the few Bestmann still in flying condition are second to no other aircraft of their class.

The model is not only absolutely true to scale (with exception of the slightly modified airfoil) but has very similar flying characteristics as the original as well. Thanks to the flaps, final approach and touchdown are relatively slow and simplify spot-landings considerably.

The prototype was flown with an old OS Max 30 with muffler and 11x4 Top Flite Nylon prop. Thus powered, the take-off run in calm weather is about 100 ft, from concrete. For flying from grass fields it is advisable to chose a more powerful engine.

Building Preparations: To speed construction and to familiarize yourself with this model, first cut out all plywood parts with a coping saw. Then remove all balsa parts from diecut sheets Nos. 2 through 10, sort out all parts on the plan, drill the necessary holes as you go along and put the parts away as they belong together. Thereafter cut and sort all strip, block and wire material. Use plans, parts list and the following materials list as reference for all these preparations: [see table]

The following equipment and material is required but not included in the kit: 5-Channel-RC-Equipment, one 4.8 or 6.4 cc Glow Engine, one 4 in pitch Prop of suitable diameter, one 250 cc RC-Tank, Balsa Cement, Contact Cement, PVA-Glue, Epoxy Cement, PVC-Cement, 3 to 4-yards of Japanese Silk, some black Monokote, 1/2 sheet of coarse Sandpaper, Sanding Sealer, Fuel Proof Dope clear, white, green, blue, black and silver, Dope Thinners, some drops of green, red and brown Paint and some clear Varnish.

Butt cement front and rear fuselage sides17 and 18,cement when dry sicles against formers and longerons. Cement former braces 19 through 21 on the rear faces of formers 1 and 5 and on the front face of former 2. When dry, sand down braces to outline of formers. Cement tailweeei mount 22 between longerons 13 with center of hole 37 mm behind former 11.

Cut two 30 mm and twelve 65 mm long fillets from balsa strips 25 and glue into fuselage corners behind former 1. When dry, cut and sand fuselage front edges for cooling air exits according to sections A-A and B-B.

Cement formers 26 and 27, cockpit frames 28 and 29 and formers 30 through 37 onto fuselage bottom. Former 27 should be located 10 mm in front of former 2 and former 37 should be slanted forward according to fuselage side view.

Cut two noseplankings 40 from surplus of part 23 and cement over formers 26 and 27 to the right and left of the fuselage center line. Wet outsides of plankings 41 through 43, mould them carefully between your fingers and cement them over formers 26 and 27. When dry, cut rear edge of planking to conform with top and side view and note that the front bottom cockpit pane should overlap about 2 mm.

Cement cockpit struts 44 and fillets 45 between cockpit frames and longeron 46 over formers 31 through 37, its rear end flush with the rear face of former 37.

Butt join front and rear parts 53 and 54 of upper fuselage sides, cut out handling holes, cement frames 55 and bot-toms 56 on inner faces and reinforce inner faces aft of handling hole with doped on silk or nylon. Cut away rear edges of plankings 47 and 50 to 52 to clear half the width of former 31 and then cement fuselage sides 53/54 against farmers 31 to 37.

FIRSTLY, this is not a kit for the person who must have an ARTF aeroplane; who can't abide sitting down for several weeks of evenings at the building board. Nor is it for the chap who wants an aircraft which does three vertical rolls on the trot, or who delights in flying at 80 mph or more. But for the aeromodeller who enjoys building and then flying at scalish speeds (20-30 mph), who likes beautifully slow approaches, judging when to put flap down (with virtually no trim change!), who accepts that to do rolls and loops one must dive to gain speed and then has to fly the manoeuvre: 'Sir, this is your aircraft'.

On opening the box, one is confronted with a mass of wood, 17 sheets of beautifully diecut balsa, three sheets of partially diecut plywood, and lot more sheet, block and strip wood, some balsa, some pine and some obechi. Additionally there are four polythene bags containing metal tubes, quick links, nylon hinging material, scale wheels, etc. The plans were rolled (excellent idea - no creases to iron out), there are large transfer sheets, the instruction booklet and a monster ABS plastic cowl.

I am not allowed to give a blow by blow description of building the model (the Editors reckon one instruction sheet is enough), but just to mention any problems, tricky bits or where I didn't follow the instructions! However, I did read the paragraph which stresses the importance of thoroughly digesting the building preparations. I banished the family (and the dog) from the lounge and spread the plans out on the floor. Then starting with
the balsa diecut sheets, identified and numbered every piece. Then I went through the strip-wood with a metric ruler and identified all those parts, again numbering them. With the aid of several cardboard boxes, the parts were separated into wings, tailplane, etc. This took time but paid off when I started building.

Some of the 'paired' diecut balsa sheets varied in weight - so I made sure I used these alternately, to avoid getting a 'heavy' wing and 'light' wing. Some of the pine strips were warped, but in fact were used after steaming straight. The odd piece of covering sheet was curved, but in fact this helped rather than hindered when it was used. As I said, the ply was only partially diecut ole for the Dremel saw! When cutting out the formers which carry the engine bearers, one has to make sure the holes are the right spacing for the engine one plans to use. (Mine is powered by a fairly ancient Merco 49, which is ample power, even for getting off rough grass.) All this sorting and cutting took about three and a half hours. Well, I had some coffee in the middle!

Constructional points: Building to the ready-for-sealing stage went very well. It took me three weeks of fairly concentrated effort, evenings and weekends - in the region of 80 hours I reckon, but it might have been more. One thing I did incorrectly - after I'd made the rudder, I found it was shorter than the fin stern post, so I extended it with an extra piece of block - this is wrong - the drawing is right!

When I was putting the undercarriage into the wing, I just couldn't make it work by the instruction method, so I substituted drilled blocks glued against the ribs to make the usual torsion bar upper fixing. The main undercarriage blocks are obechi..." 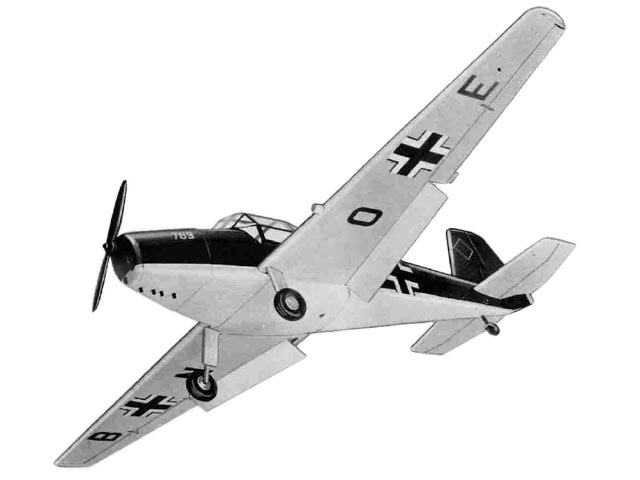 Hello, It seems that the instruction folder is not complete. Fuselage construction 4 chapter is not fully scanned as much as list of parts (parts before #48). Is it possible to submit the all instructions pages?
Thanks a lot for sharing all these plans.
JLMy - 03/09/2020
Add a comment