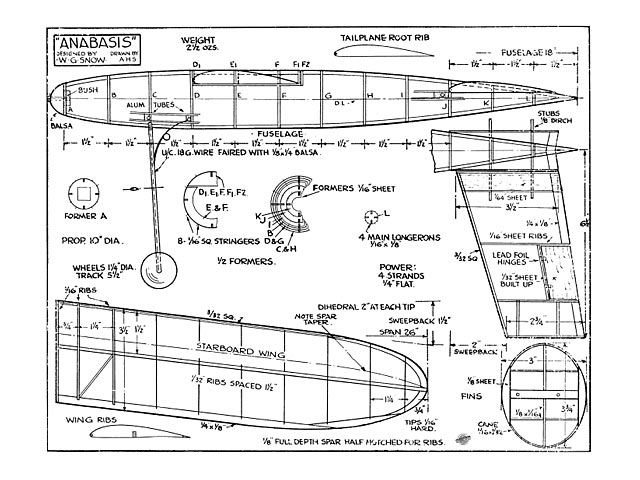 Quote: "I DESIGNED this model as one combining moderately good looks, performance and strength. I have only given 400 turns out of a possible 650 and have got many flights timed for over 30 seconds on them, from a small motor of 2 loops of 1/4 in flat rubber.

The Fuselage: The four master stringers are cut from 1/16 in hard sheet balsa and also the bulkheads. Assemble in the usual manner. Then add 1/16 in square stringers, two between each master stringer - eight in all. When thoroughly dry cut away the wood between bulkheads D and G, the top master stringer and one 1/16 in stringer on each side. This is the platform for the wing and it is best to plank it. Of course, formers E and F are not full circles at the start. The first former should be strengthened by the addition of a plywood duplicate. The nose block is of laminated sheet and bushed.

The Mainplane. This is of the usual construction and care must be taken that the 1/32 in. ribs are not tight fits or they will warp. Stick the two halves together and when dry add the part-bulkheads D1, E1, F and F1 putting strips of their balsa along the bottom for runners. Then add the stringers and we have a nice streamlined centre-section. The distance from D to G is larger than the chord and the space. can be filled with former F2 when the correct position for the wing has been found, so save planking the platform till then Use elastic bands to hold wing on.

The Tailplane. Like the wing this is straightforward in construction. For lightness the ribs can be hollowed out. I found it best not to use paper tubing for attachment to the stubs at the fuselage as it makes far too much rigidity. Without them the tail falls right off on a very heavy landing. The fitting will loosen after a time so put a hook under and on the first rib on each unit and pass a rubber band around them via the fuselage where the tissue is cut away for the motor peg. Cover the first panel with 1/64 in sheet balsa. However, do make tube fox the fin stubs to fit into. Also be sure to fit the elevator flush and glue it rigidly when the right position is found.

The Fins, Undercart and Tail Fixing. The fin is very easy but be careful to see that the stubs are not more than 1/2 - 3/4 in long. The undercart is of 18 gauge wire, is detachable, fits into aluminium tubing cemented and balsa packed in the fuselage, and is faired with 1/8 x 1/4 hard balsa sanded to an '0' section. Bind the extremities and spring joint neatly and well. It pays.

The tail fixing or fairing may cause puzzled frowns. I couldn't depict very well but I will endeavour to elucidate: we have two ribs which are glued to the V (for victory - and backsweep) shaped piece sanded thus [triangle drawing]. When dry fix on to the fuselage, the nose of the ribs touching at bulkhead J. Pack up the tail end parallel with the thrust or datum line (in this case obviously the same). When set, pass through holes which should already have been cut, the dowels. Glue on the inside, and reinforce with pieces of strip balsa. Get it now?

Final Stages: Best cover the fuselage in 4 pieces. My scheme was black for fuselage and fins and white for the tailplane and wings. Spray with water once and pin out to stop warping. Then apply two coats of clear dope. I have got super flights from a 10 in propeller and 4 strands of 1/4 in rubber. I think 6 strands - slightly larger - will give better climb and flight generally. The glide is about 8-11 in 1 according to conditions and weight 2-1/4 oz. When a good glide is obtained, use down-thrust for power flight; don't alter the incidence on the wing."