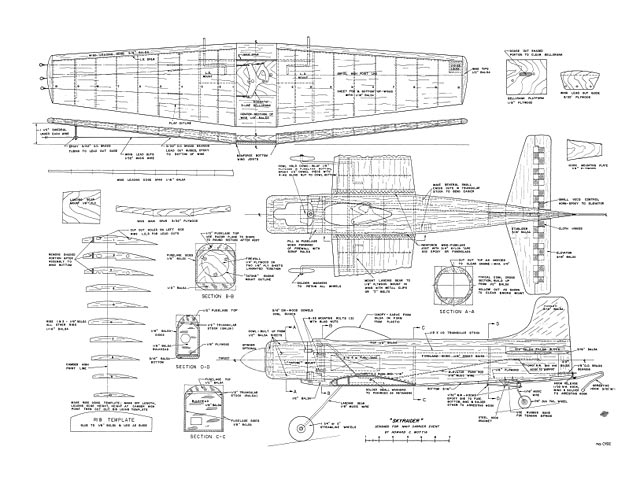 Quote: "Skyraider for Navy Carrier. An expertly designed ship with interchangeable engines for Class I and II. By Howard Mottin.

THE incomparable Douglas Skyraider has a record that will be hard to match by any other aircraft in military aviation his-tory. Originally conceived in 1944, the Skyraider has had a life span that has extended over three wars. After being designed in June, 1944, the first prototype was flown on March 18, 1945. Twenty-five pre-production prototypes were ordered and built, beginning in July 1944, and were designated the XBT2D-1. The Skyraider originally had a huge propeller spinner and was known as the 'Dauntless II.' But only the number four prototype actually flew with the spinner. Following the first successful test flights of the then Dauntless II, a production order was placed for 548 BT2D-1 air-craft on April 18, 1945.

With V-J Day and the end of World War II, this initial production order was cut to 277 planes. The name was changed to Skyraider in February of 1946 and, in April, the Navy changed the letter designation from BT2D-1 to a day-attack aircraft designation of AD-1. Seven basic versions of the Skyraider have been produced.

Although the primary mission of the Skyraider is the day-attack mode, other versions of the aircraft have also been produced; namely for radar countermeasure, early warning and night attack. With special modifications, various specialized versions were also made from the basic configuration. These were for antisubmarine warfare, ambulance, cargo, refueling tankers, and photographic missions.

Beginning with the outbreak of the Korean War in 1950, the Skyraider saw combat action. The AD's served as the standard dive-bomber throughout the three years of the war and were operated from both carriers and land bases.

The final version of the Skyraider, the AD-7, was put production in 1955. When production completed in March 1957, ending 12 years of Skyraider production at the Douglas El Segundo plant, a total of 3,180 planes have been built in seven versions and 28 subversions. But this was not the end of the line for the Skyraider. Beginning in 1960, surplus aircraft were delivered to the Republic of Vietnam Air Force, and were flown by Vietnamese pilots. One of the most notable was the former leader of South Vietnam, General Nguyen Cao Ky.

In 1962, following a Department of Defense directive, the AD was again redesignated; the AD-5 to A-1E, the AD-6 to A-1H and the AD-7 to A-1J. Finally, in August 1964, following the Gulf of Tonkin incident, the US Navy entered the Vietnam War using the Skyraider.

Although not as sophisticated or as fast as the modern jets, the Skyraider has proven itself a combat workhorse, and has made an enviable record in its 25-year history.

The Skyraider is also a natural subject for the AMA Navy Carrier event. The first Navy Carrier competition held at the 19th Nats, way back in 1950 at Dallas NAS, was won by a Skyraider model flown by Cal Smith.

Although the basic Navy Carrier rules have not changed appreciably since that time, the models have somewhat. Instead of the large, slow, and heavy models of that era, the current top models are small, fast and light weight. Since there is an automatic limit on the low speed of the model, the only way to increase the point total is to increase the top speed. Low speed is limited by the stalling characteristics of the particular model. This is usually between 20 and 30 mph, depending on the wing and weather conditions. Top speed is determined by how much power can be crammed into that small package of balsa.

But along with increased power, usually comes an increase in weight and a corre-sponding necessary increase in size to maintain a reasonable stall speed. So trade-offs and compromises must be made to achieve an optimum design that has both light-weight and maximum power. A further advantage is the abundance of available reference material. One of the most perplexing problems facing modelers wishing to participate in the Navy Carrier event is the lack of good reference material on most of the designs that would otherwise be suitable for this event. This is not the case with the Skyraider. Since this plane is operational, many photographs still appear. A visit to the local library will reveal many of them. A source available to every mod-eler is the "Profile Publication" No. 60 found at most hobby shops. This pamphlet con-tains both the three-view drawing and color pictures that are necessary for the scale bonus points. A more complete history on the Skyraider also is presented.

As the initial design characteristic, I decided that this Skyraider model would have the dual capability of being flown in either Class I or II Carrier events. So I made the compromise to design it around the R/C 60 rather than a racing 60, which is heavier and more powerful. The R/C 60 is about the same weight as a racing 40 with only a small decrease in size for the 40. By using a Tatone engine mount, a universal type of mounting arrangement can be had, enabling the quick interchange of engines. The model itself is sized around the 40 and, since the weight does not change much, almost identical flying characteristics are maintained.

Another compromise that was made was the use of a lifting (Clark Y type) airfoil as opposed to the semi-symmetrical type that is used on most planes in this event. I also decided against the use of flaps, although the outline is shown on the plans. I did not feel that the benefits gained from flaps would outweigh the complications involved in installing the 'bird-nest' linkage system necessary to make them work. Those expert at building this type of craft always use their own system anyway. I felt that the use of a lifting airfoil would help to make up for the lack of flaps while the increase in drag at high speed would not be such a great detriment. A further advan-tage is the ease of constructing the wing using a flat-bottom airfoil. A 'true' wing can be built on a flat surface without the use of a jig which is ordinarily necessary for the semi-symmetrical type.

Thus, we have come to the outstanding characteristic of this model, its simplicity. An attempt was made to maintain a simplified construction technique as the primary design criteria. The Douglas Skyraider is a natural in this respect. The square-type fuselage cross section is about the easiest type there is to build. Instead of taking months to build, this plane can be put together in a matter of hours..." 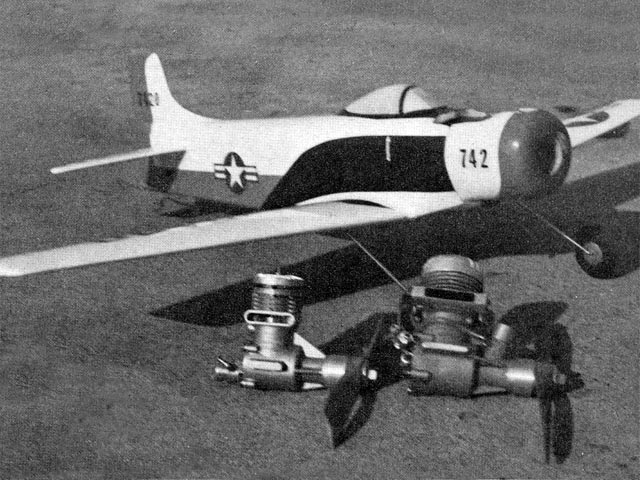