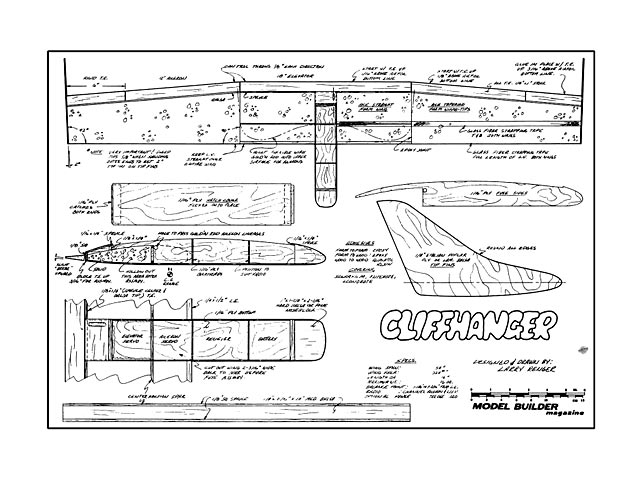 Once upon a time in the happy little kingdom of Model Builder, there lived a couple of lovely young flying wings. Also in this kingdom there was a young (more or less, I'm told) lad who saw them and fell madly in love. Sad to say, he was under a dark spell by the wicked witch called 'Lazy', and was unable to reach his desire.

One bright day while sitting at his building board, our hero came across the fixings needed to overcome the dreaded Lazy spell. Chanting 'ACEEXPANDEDBEADFOAMMOLDEDWINGS' under his breath, he mixed a grisly potion of Parts A & B of a magic 5-minute elixer bought at great cost from the land of Hobbypoxy. At it hammer and tongs, wrapping with cloths of bright plastic and adding mysterious electronic black boxes, he had his creation finished in a nonce.

This particular nonce happened to be in the middle of a dark and gloomy night. but the wings shown with a luster, the pinstriping was in place, even a name was proudly emblazoned on one wing! Lo and Behold! It was the 'Cliff-hanger', all ready to fly. Now our lazy lout had a sexy flying wing all his very own.

There was one hang-up, a nagging fear that the new model would just flop helplessly end for end when it was thrown over the edge of the local cliff. Fortunately, there is an old trick for checking model stability developed by, of all people. the model rocketeers. A thirty-foot piece of 1/2A dacron control line was tied around the fuselage and run through a small hole drilled 1-1/2 inches from the leading edge in one wing tip fin.

Thus it came to pass that around the witching hour last July 4th, I sneaked out into the middle of the street in front of my house and did a 'swing test' to check balance and control settings on the prototype Cliffhanger. Sure enough, there were trim adjustments required, but due to the safe control possible with a tether, there wasn't a scratch on the model even though I was flying it over asphalt. It's just a good thing that the neighbors are understanding about that weirdo on the block playing with his model airplanes in the dead of night.

First flights were not quite so smooth as I hoped, but not disastrous. I had trimmed for a very flat, fast glide on the tether. Experience now indicates that a bit more 'float' is in order. More on this later.

About the time I was getting Cliff-hanger flying right, it folded in the middle during a tight turn. OOPS! Back to the drawing board for design of a completely new center section. Tip fins were also enlarged in the process. New construction was quick, as I grafted the new parts onto the old tips - Lazy strikes again! This time there were no special flight problems. The changes worked just fine and Cliffhanger is now a good flying model.

So what is the end result? Well, Cliffhanger won't thermal, that's for sure; it's purely a slope machine. But it is fast and smooth, turns on a dime, handles high winds with ease, and is nice and compact. For sport aerobatics, or speed on the slope, Cliffhanger is a hot trip. The highest wind yet tried with Cliffhanger was a steady 40 mph. This was over a sheer 300-foot cliff, so lift was no problem. I finally had to fly straight into a bush to get down. Loops and rolls were duck soup that day.

The separate ailerons and elevator and this particular mode of construction yield a really easy-to-build airplane. It's both rugged and repairable. The materials are simple and inexpensive. In the air, this model looks clean and purposeful. Longitudinal trim is smooth, due to the almost symmetrical wing section. As you might expect, it does require careful CG placement..." 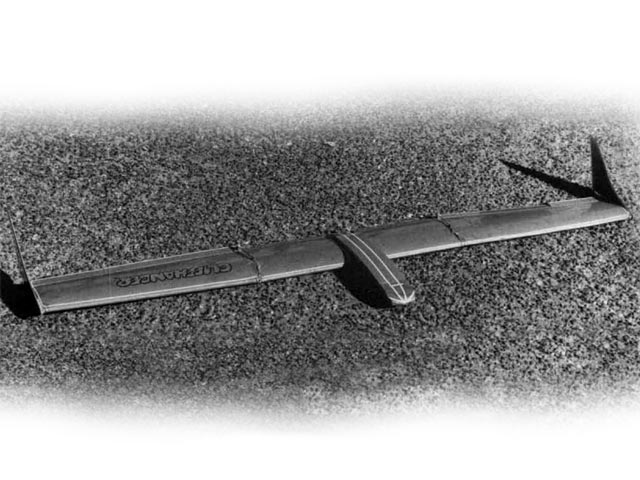