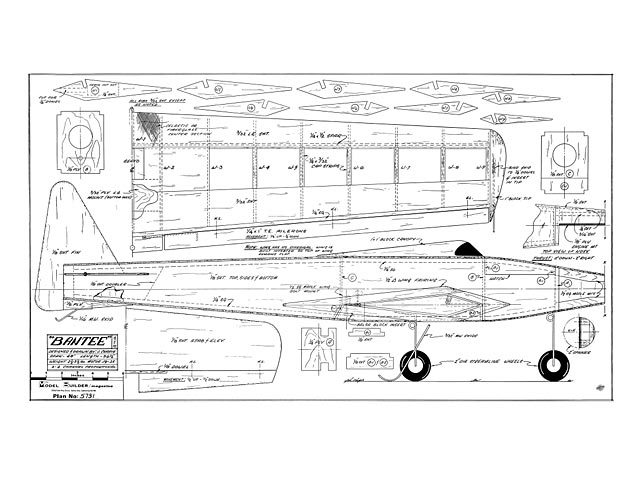 Quote: "A low-cost R/C sport model with lines and flying ability of the big and expensive pattern ships. Features a diamond airfoil, tandem landing gear, and can be flown on 2 or 3 channels. Bantee, by John Chapis.

Are you a sport flyer who has run the gamut of 2 and 3 channel aircraft? Are you looking for something that will fly like the big competition ships but will also fly with the economy of your .19 powered sporsters? If the answer to these questions is Yes, then the Bantee is the ship for you. The Bantee was designed for those of us who would like to fly the big hot ships, but can't really justify the addi-tional expenditure for just Sunday flying.

The original idea was to give you a chance to use your old engines with a 2 channel system. But it will still handle up to 4 channels with ease.

The lines followed are those of Jim Martin's famous Banshee, but several ideas were incorporated to keep it a simple but rugged design. First, the box type fuselage and sheet surfaces reduce building time and ease the construction for the not-so-experienced builder. Second, we've incorporated a diamond-shaped airfoil that allows the wing to be built inverted on the work bench. This doesn't sound like much, but, the time required to have the prototype covered and ready for radio installation was only six hours.

There are several ways in which the Bantee may be constructed. One way is as shown on the plans. But for those who aren't quite ready for a ship without dihedral, add about 10 degrees total dihedral as I did on my father's ship.

Also, because of its compact size, the ship may be built in one piece.

CONSTRUCTION: Basic construction of the fuselage follows normal building practices. However, for those of you who enjoy hollowing and sanding blocks of balsa, you can replace the beam mounts so as to use a radial mounting system. Now the fuselage is finished. Insert the stab but do not glue until the wing is complete.

The wing construction is very simple and I suggest that 48 inch stock be used throughout to prevent any unnecessary joints. Use a very hard piece of balsa for the spar. if spruce is available to you, it could be used to eliminate the fiberglass reinforcement in the center section.

Mark the rib spacing on the spar. Install center and tip ribs. Place on a flat work surface with the trailing edge and spar tacked firmly to the work surface. Now complete the installation of ribs and sheet the bottom portion of the wing. After it dries, remove the wing from the building surface and plank the top section in the same manner. Add tips and fit ailerons. Do not install ailerons at this time.

Next, fit the wing to the fuselage and check alignment. After alignment is complete, glue the stab and add the fin.

Now the basic structure is complete. Sand and cover your craft to meet your own specs. I would recommend the use of Monokote to keep it light for best performance. After the ship has been covered, install the elevator and ailerons.

Now you say, With 3 channels how do you get the nose gear to work? Well, study the picture and it should answer any questions about linkage. OK, now you say, It should work, but how well? I feel it works better than some trike jobs I've had because of the added drag of the tip skids. So, this is your job to decide between tandem or trike. But, remember that with trike you've got more drag while buzzing around the sky than if you have tandem gear.

Enough idle chatter. Construction is simple and the plans and pictures should show you all that you need to know. But what about flying? How simple is that? Having no dihedral in my version, this bird stays where you put it. Landings are the same as most small planes and no bad stall characteristics are evi-dent. As far as stuntability when using 2 and 3 channels; with a little practice and using the wind to your advantage, you can do the full pattern.

If you are worried about low speed stability and you need more convincing about this ship, let me tell you how I shook the boys up at the local flying site. An old Eastern Shore flying buddy of the editor, Cliff Morris, was bugging me to get the Bantee into the air. Because of the tall grass, however, I could not get off the ground for hanging up the nose gear. So, I chopped the throttle and walked out to the ship, picked it up, and with Joe Namath style, chucked it into the air. Cliff's face was white as a sheet because all he could foresee happening was a big snap roll into the deck!

Let me add a closing note to those contest-minded flyers who would like to build the Bantee. Fully sheet the wing, change the tail surfaces to 1/4 inch sheet and add 4 channels, with no more than a .35 for power.

I hope you have as much fun with your Bantee as I have had with mine. Happy Landings! " 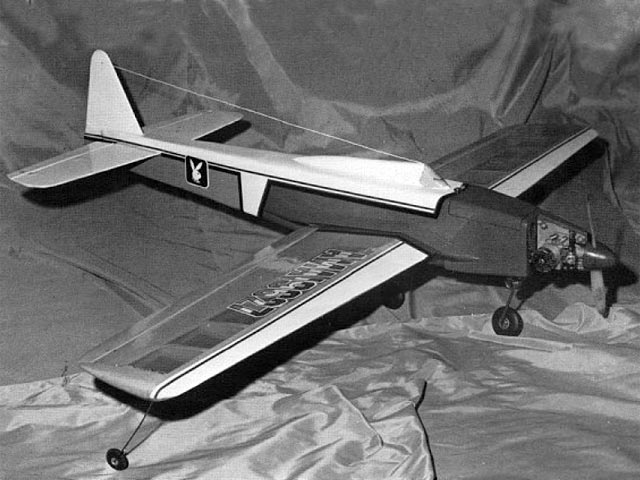