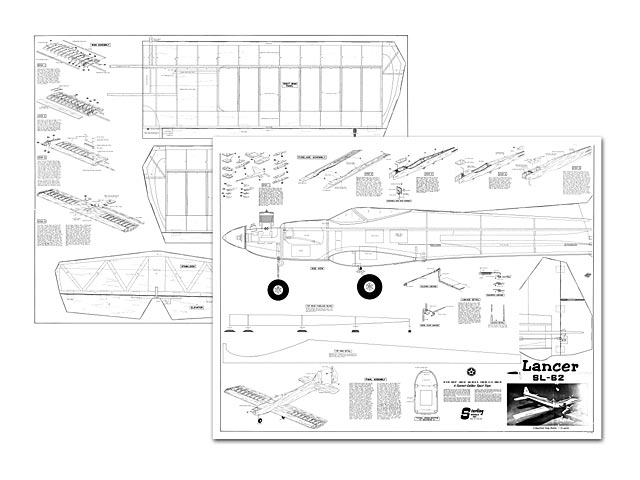 Quote: "The Magnificent SL-62 is the result of 2 years' design and testing to meet the 'if they had only made it this way' suggestions directly from the R/C Flyers in the Field. The result is this 62 in span beauty which has fulfilled expectations and aroused great enthusiasm with the R/C Flyers who have seen and flown the test models. Collective engineering-design is reflected in the fast and easy way the SL-62 goes together, and the flying - well, you've just got to take the Stick to believe it; it's that good.

Quote: "Attached is a copy of scanned plans for the Sterling Lancer SL62. This is the Sterling kit FS-30 and is the 60 size Lancer. I see you have the 40 size plans for this model, but not the 60. I hope this will fix that! Thanks for providing this great service to obtain plans."

Conventional and well designed, the Lancer is capable of getting you into Pattern competition when you're ready.

Ever since I was a little boy, I was always intrigued by the pretty pictures on the Sterling Models kit boxes. It seemed, however, that I could never make the finished stick model appear anything like the box art. After a few tries I gave up that type of model and progressed to other, simpler types. As I grew older, the intrigue returned, and I built a successful squadron of Sterling scale models - all rubber powered - that did look a great deal like the picture on the box, probably because my building skill had increased. Alas, they never flew that well unless great pains were taken to keep them extremely light. Later on I constructed a few control line models by the same company and always found them to be fine performing aircraft, but ones that required a lot more building than most models in their class - although the end result was usually well worth the extra effort.

Its been a long time since I've tried a Sterling kit, so when the opportunity came to do a test on one, I readily accepted. I chose the Lancer SL-62, a .60-sized version of Sterling's very popular 40-size Lancer (oz5193). The kit number is FS30 and retails for a nominal $44.95.

The Lancer has a 62 inch wingspan with 700 sq inches of area. The overall length is 50 in, and all-up weight should be between 6-1/4 and 7 lbs. Even though it's intended for .60 engines, I really believe a good .45-.50 engine would handle it with ease. Sterling bills the SL-62 as a 'contest-caliber sport flyer,' and that's exactly what it is. After extensive testing, I would have to say that it may not be a competitive airplane for D-Expert Pattern, but it should be very competitive in the novice pattern classed. The design is a result of two years of design and testing to meet the 'if they had only made it this way' suggestions directly from the RC flyers in the field.

Removing the lid from the kit box will reveal Prime grade, density-selected balsa sanded to micrometer tolerances, imported Birch plywood, five accurately diecut balsa and plywood bulkheads, pre-shaped nose and cowl blocks, one-piece full-length fuselage sides with plywood doublers that extend past the wing saddle for additional strength, custom aluminum motor mounts, formed landing gear wires, and a complete hardware bag. All wing and stab ribs are cleanly die-cut. The plans are very easy to follow and are as complete and as accurate as anyone could ask for. The building instructions are printed directly on the plans.

Even though the "Lancer SL-62" may not be a beginners model, anyone with a bit of building experience should have no difficulty in assembling it. The fuselage features typical box-type construction with plywood doublers and top and bottom stringers. The fin, rudder and elevators are sheet balsa, while the stab is built up and sheet covered to keep it permanently flat.

The wing is also built up, and the leading and trailing edges are covered with sheet balsa along with the center section. The wingtips are a bit unique as they are made up of laminated balsa pieces and are then locked into the last wing rib and the leading edge.

For top performance, the wing is constructed flat on the workbench with the aid of breakaway feet attached to the wing ribs to insure perfect alignment. For strength, each wing panel has a hard 1/4 in square balsa top and bottom spar with a 22-1/2 long, x 3/4 in main (center) spar. The wing has no dihedral, and the center section, although strongly built, should be covered with a piece of 3 in wide fiberglass cloth. The ailerons are preshaped and installed with the torque rods provided..." 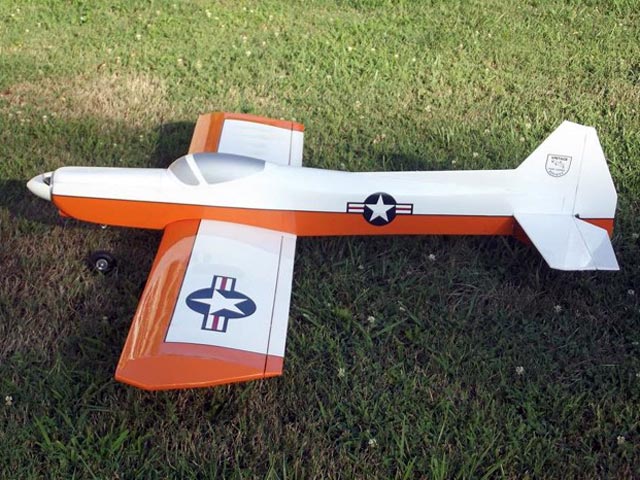 Here are a couple of photos of the Sterling Lancer SL62 I just maidened [main pic, 003]. I got the short kit at a Vintage R/C Society meet in Lancaster, PA a couple of years ago and built it that winter. Due family issues it only flew once in 2019 and now again in 2020. The plane is set up with a Rimfire 60, an E-flite 100amp Esc and uses a 6S 5000mah battery. It easily takes off at 2/3 throttle and performs beautiful aerobatics at ½ - 2/3 throttle. A beautiful flying aircraft.
Tom Kozel - 05/08/2020
Add a comment