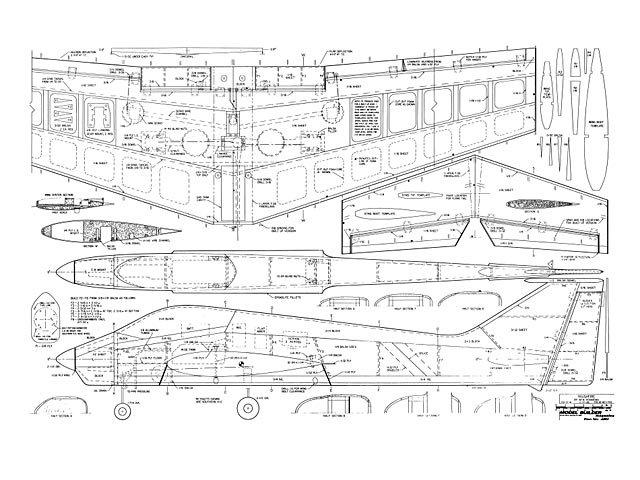 Quote: "Fine contemporary Pattern design being used by several of the top aerobatic contenders. Can be all balsa constructed, or go your own way with foam wing cores and glass fuselage.

AMA pattern rules have remained unchanged for quite some time now, and as such, pattern designs have evolved into a fairly small group of highly refined, successful aircraft. Because the event has remained stable, there has been time to refine the promising designs and to weed out the less spectacular performers. In a situation like this, where contest proven, winning designs prevail, it is extremely difficult to inject originality into a new design without sacrificing contest winning potential.

There are two things working against the original design. First, the existing designs are proven. They fly extremely well. If an original design is different from the norm in some respect, then the chances are probably better than 50-50 that the difference will not result in a performance improvement. Secondly, and probably an even greater disadvantage, is that the judges are used to existing designs. They are accustomed to the size and speed of maneuvers as performed by the 'in' designs. A new design performing the same maneuvers will look different to the judges, and until the new design has become established, the difference in the maneuvers' appearance will probably result in lower scores rather than higher.

A case in point is Wayne Ulery's EU-1, flown in recent years by Dean Koger. The EU-1 is a radical departure from the pattern aircraft standard. It is large, different looking, and slow, yet it flies beautifully. But Koger, an established flier, struggled for more than a year with a reluctance on the part of the pattern community to accept an alien design. Persistent excellent performance finally earned a niche for the design, and Dean and the EU-1 went on to earn a spot on the US international team this year.

So what does the would-be pattern designer do? if he values originality, he's reluctant to turn out a cosmetically altered carbon copy of someone else's design. If he wants his airplane to stand a competitive chance in its early stages, then he dare not stray too far from the accepted standards. The designer can only hope to be lucky enough to arrive at a compromise that flies well, is different enough to satisfy his creative urges, and conventional enough to gain entrance to the pattern arena.

The aircraft presented here, the Brushfire, is one designer's attempt to achieve that elusive compromise.

The Brushfire was designed late in the summer of 1978 as a result of an inquiry by Steve Rojecki. Steve was a successful Novice pattern flier at that time, and he wanted an original new design to fly when he entered Masters class competition the next year. He had some ideas on airplane size and general layout, but no experience in pattern aircraft design. We were discussing Steve's concepts one day, when he casually asked if I'd like to design the kind of airplane he had in mind. I had been mulling over a serious attempt at modern design for a couple of years, so I agreed to the project.

Steve's basic idea was for a large airplane, with flaps, and with a swept wing configuration like the Phoenix 8 he had been flying. From these guidelines, the Brushfire took shape. It was sized at 860 square inches, approximately halfway between the Phoenix 8 and the EU-1. Wing aspect ratio and sweep angle were also selected midway between the EU-1 and P-8. The fuselage was configured similar to a Phoenix..."

Update 03/08/2020: Added alternate plan, thanks to JeffGreeen. This shows full layout of the wing, plus mirrored fuselage bulkheads. 2 sheets. 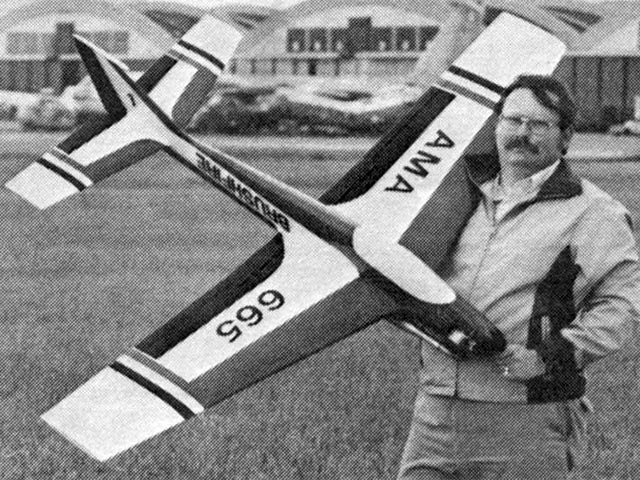