Quote: "It's a rare treat when an unpublished, genuine vintage design surfaces almoost 50 years on - but that is just what has happened with this pretty 44 in span veteraqn from Peter Holland. Redskin.

Hitherto unppublished, the original 'Redskin' was designed by Peter Holland way back in the pre-1950s as a test bed for the then new Mk 1 Elfin 1.8 cc diesel as soon as it appeared in the shops. Now, in search of something for lightweight radio and the smaller range of engines, he has gone back into his archives and added radio to the plan. The result is our latest full size plan, so over to Peter.

In those days, many free flight sport models were of open frame construction, including the fuselage, but when I casually started up the brand new 360 degree ported Elfin 1.8 cc diesel, in the kitchen, the cat was not seen for some hours. Clearly this neat little diesel had potential; it would need a rigid fuselage. But to enjoy running it in, a sport free flight model was my answer.

The radial mount integral with the engine and plastic tube tank enabled me to fix it with the cylinder side mounted. This was unusual in the standard type of cabin job. However I liked the appearance of a flat, wide cowling, and there would be no chunk of engine spraying goo all over the windscreen. The tank was not a problem, because I would use a separate limit tank.

The fuselage was fully skinned with tiny corner strips - you could hardly call then longerons - and the result was a light and rigid box with not unpleasing lines. The undercarriage was to be fixed to the firewall, but, being free flight, there had to be a knock-off fixing for those downwind arrivals. The front end, engine mount, undercarriage and cowling where in one unit, retained by rubber bands. It sat in a keyed recess in the part of the firewall built into the fuselage. This feature contributed to the fact that the model lasted about four years of steady outings, before the engine was transferred to control line use.

The name 'Redskin' was a natural; The fuselage was an orange shade of red and it was skinned. The Elfin provided those Red Indian war whoops as it went into its climb mode!

Adding radio: I still have the original Elfin Mk.1 but silencing is a problem, in any case it might have struggled with a muffler, because the weight of which, plus today's radio payload, would have increased the original wing loading by at least 75 percent. Now when you include the difference in weight between that diesel, and a .15 cu in glow motor with silencer, the figure goes up a little more, but there is more power to deal with it and the present loading of 9.9 oz /sq ft is more realistic in today's sport scene.

I have made no visual or structural changes to the design other than those dictated by radio conversion. These are as follows.

1. The wing is one piece, instead of the doweled-together type which was then necessary for free flight rough and tumble, and the need to stow the model in a box on the back of a push bike.
2. I added a fixed tail assembly, instead of using bands and dowels.
3. I enlarged the width of the fin and tailplane trailing edge material (but not the area) so as to have rudder and elevator in place of a small rudder tab. The external parts of the linkage are unobtrusive, and hinges are stitches, in the traditional manner (if you've got to have control surfaces, keep them in style).
4. Clearly, that knock-off feature of the front end had to go, I hate to think what would happen to the throttle linkage, but the 1/4 in longer cowling is retained with those same type of hooks and bands as held the whole works before, and that joint line is preserved.

I did film cover this one, because so many average fliers prefer not have that smelly dope and tissue. The original 'Redskin' used white rag tissue which soaked up the dope, and there was colour dope on the fuselage and leading edge. You can't get 1 in wheels made from an old rubber foam bath mat either!

The CG is now where it should be or a radio model. In its free flight days the position was more than 50 percent back, due to my habit of using larger tail areas with rigging angles to suit.

Start here: Begin by making the undercarriage legs. Bend them from 12 gauge piano wire per the front view on the plan. The springing is by torsion bar and is per riginal (but thicker). Leave the spats for now, because the undercarriage needs to be fixed to F1 before it is built into the fuselage.

Building the fuselage: No sweat, just traditional balsa butchery, but there are a few little wrinkles to help along the way. I started by checking the engine/tank setup with a bench run using the nylon motor mount that was to go in the model..." 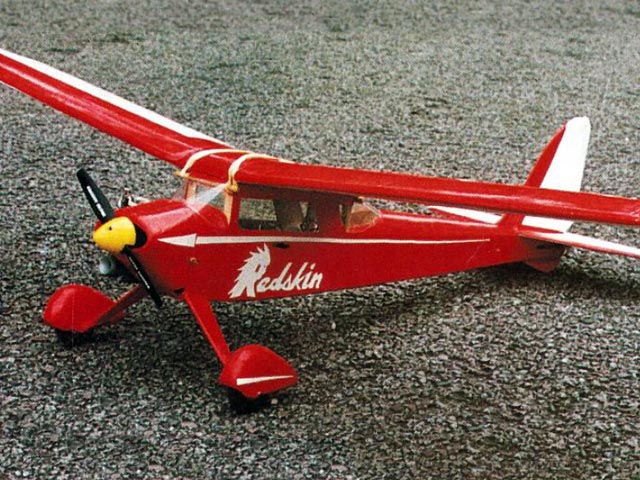 A pleasant model from someone with more than a four decades design stretch. The leg fairings and wheel spats are small details that brighten the fine looks.
Miguel - 02/08/2020
Add a comment