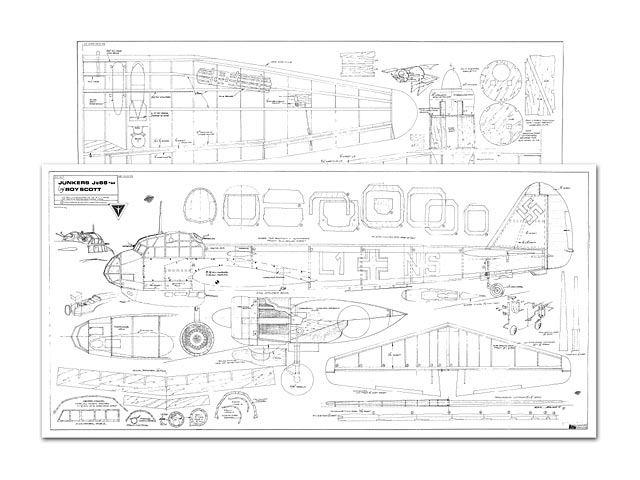 Quote: "At last! The WWII twin you've been waiting for. Junkers Ju 88A-4, by Roy Scott.

THE ju 88 has been in my mind for many years as being a suitable twin-engined aircraft crying out to be modelled for radio control. There are three good reasons: firstly, the areas are good and planform and moments excellent; secondly, control surface areas more than adequate; and thirdly, the colour schemes seemed endless.

Apart from my belief that here was an instrument with inherently good flying qualities, I often aim at designing a model that will recapture a bygone age and, after all, no more will squadrons of Ju 88's, He 111's or Do 217's cross the English Channel searching for plum targets to bomb. I chose the A4 version of the u 88 however, in the colours of Lehrgesch-wader One (code LI + NS). This was based in North Africa and sport-ed a sand and mottled drab green finish with light blue undersides.

Many modellers reading this, if they were either pilot or aircrew during the war, probably have a vivid picture in their minds of coming to close quarters with an '88 and therefore their own pet reasons for seeing one airborne once again, albeit a model. A fellow aeromodeller, an ex-Battle of Britain fighter pilot, remarked that the adrenalin was running quite high watching my Ju 88 flying, and being chased by another modeller's Hurri-cane at our club field.

The Ju 88 was one of Germany's most widely used aircraft during World War II, seeing battle on all fronts. A Ju 88 with its two Junkers Jumo 211J engines at full bore could, in a light state, outrun a Beaufighter II.

The model is to 1/12 scale, 72 in span, designed around the power output of two 30 size motors with 9 x 4 props, and weighs 9-1/2 lb - well within the limits for competition use. It is not a beginner's model, but, with a few explanations on construction, the person who has built a scale model or two will find the Ju 88 no great problem.

CONSTRUCTION: Fuselage: The fuselage has two basic 3/16 sheet balsa sides with a front doubler and trebler of 5/16 ply laminated with contact cement to each other. The positions of the formers are marked off and they are then white glued between the sides. Allow these to set, than add the top and bottom 3/16 sheet, nose blocks and nose former. When all is dry, use a sanding block approximately 7 x 5 x 1 in and sand the edges off the sheeting level with the formers. Apply the 3/16 sheeting to the four corners, hold in place with rubber bands and when set razor-plane and sand to the shapes shown on former drawings.

Tail unit: Building the fin and tailplane requires no explanation but do remember to install the tailwheel assembly before installing the tailplane to fuselage. This is built up with brass tube, brass or copper brackets and horn, the horn being silver-soldered to the leg wire. Run the servo pushrods to the tailwheel and elevator horns and then slide in the tailplane. Do not make fast until alignment with the wing is complete. Connection is made to the rudder via a cutout between the tailwheel doors.

Wing: The wing needs special care in order to avoid making mistakes, so get well acquainted with the drawings. I would suggest you construct a special 'wing building board' if you do not have one. Simply use two pieces of block-board 18 x 36 in, hinged in the middle, then packed up to the desired dihedral. Set the angle of the board 3-5/8 in above level at ribs No.14 for each wing half. Cut and join the wing plan at rib No.1, cover with plastic film and commence building by pinning down the forward 1/4 in square spars and dihedral braces. Pin down a strip of 3/4 square balsa on the plan so that rib No.1 is packed up level and rib No.14 is 3/16 in above level at its trailing edge with its nose flat on the board. This gives 3/16 in progressive washout from rib 1. Position and glue all the remaining ribs down on to the forward spar, then add all the top spars and sub leading edge.

When set, turn wing over (reverse the angle of the building board) and add the remaining spars and sheet over the bottom of wing with 3/32 sheet balsa. Turn the wing once more and the board to correct dihedral angle. Maintain the position of the 3/8 square washout strip. Sheet a 4 in width from the trailing edge after block sanding the under-sheeting to rib contour at the ex-treme trailing edge. Sheet a 3 in width from the leading edge and allow ample time to dry out, thereby retaining the built-in washout. Add the bin. leading edge (but do not shape) plus bell cranks, wires and cables for motor control, one servo for both engine throttles.

Remove wing, cut away sheeting and glue formers C5, C6 into position, together with engine bearers and formers C1, C2, C3, C4 and two C7's. Take care to reverse formers Cr to C4 on the opposite wing to give outthrust to each engine. Make sure that former C2 is glued flat to the 1/2 in leading edge, which has been cut from..." 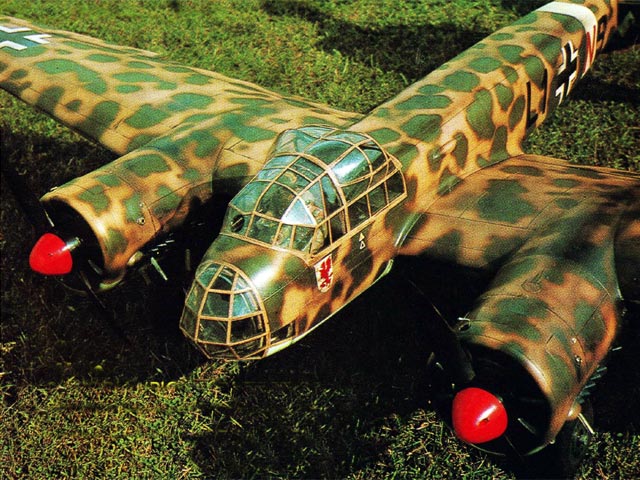