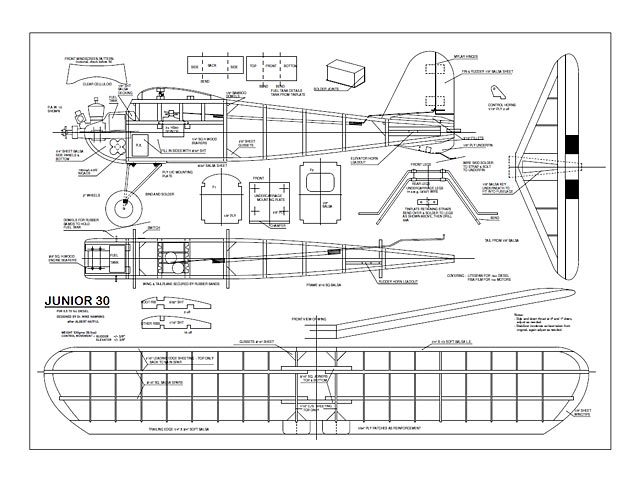 Note this is nominally a half-size version of the classic Keil Kraft Junior 60 (oz9995) design. Note the KK Junior 60 actually had a wingspan of 63 inches, not (as stated in the article text) 60 inches.

June 1996 is, as a reader tells us, the 50th anniversary of the Keil Kraft Junior 60 which, with its numerous subsequently designed derivatives, must be the most often built British model ever. Having made a number of fairly large scale models recently, I thought that I would like to try half scale instead of quarter, so here it is. Not having a plan of the original 60 in version, I scaled up the drawing in Vic Smeed's book Favourites of the '50s.

An undercambered wing does not make much sense on a 30 in span model so I do not claim absolute scale. Any diesel or glow motor of .5 to 1 cc should do. I have used a PAW 100 and an AE 1cc with 7 x 4 props. The structure is reasonably strong, to take three channel radio. We have a tarmac strip at the Royal Thai Air Force flying field that I fly from, which is fine for take off and landing, although hand launch should be easy enough on a grass field. Unfortunately our flying ground is now under threat from developers (may they develop something ending in 'itis'!) Our other problem is that ether is now a banned substance in my part of the world as naughty people apparently use it for making naughty substances, but while the supply lasts I shall continue to enjoy spluttering round the sky while the helicopters drone and the .40s roar. At only 9 cc of fuel per tankful this should be quite a while yet.

A model like this is quickly and easily built at remarkably low cost and will even fit in your suitcase when going on holiday so why not a 'Junior 30' if you have an odd hour to spare?

Construction: The two wing panels are built and then packed up for dihedral and joined with the 3/16 square joiners. The top of the leading edge and centre section are sheeted with 1/16 balsa. Make up the undercarriage and solder on the tinplate fixing straps, drill them for about 6 BA bolls and use as a pattern for the holes in the fuselage mounting plate. The bearers are mounted on Fl and the two fuselage sides glued to F1 and F2. Fill in one side of the front fuselage with 3/32nd sheet and mount the three servos on their bearers. Glue these to the side already sheeted and then add the other side sheet. To fit the undercarriage mounting bolts in their holes, push the head of the bolt into a piece of silicone fuel tube.

The engine is mounted using bolts and spike nuts (I used American 2-56 bolts) and the nose completed with 1/4 in soft sheet. The tinplate tank is very easy to solder up. Do test it by holding under water and blowing down the fuel tube (not silicone-for a diesel).

Radio: I used a Micron Mini receiver with a 180 mAh battery wired directly to the switch. Only two servos will be needed if using an engine without throttle. Dubro 'E-Z' connectors on the servo discs make adjustments simple. I highly recommend HS 80 servos.

Covering: Litespan is the lightest covering around and would be advisable for a .5 cc powered version. However, I used Fibafilm which I find more durable. Letters are cut from vinyl sheet. Don't forget - plenty of fuel proofer around the nose.

Flying: At an all-up weight of 18.1/2 ounces this is not a lightweight but with about 3/8 in movement each way on rudder and elevator is simple and straightforward to fly, and fly until the fuel bottle is empty. (Why keep it? Stale diesel fuel is no more use than stale beer).

Initially, I had some problems with sudden swerves on take off, due, I blush to say, to wobbly wheels. When I put bushes in the wheel hubs, end of problem. I also had a crash similar to a number that I have had over the years, the common factors being a 35 mHz system and the model a long way off and directly in line with a working airfield radar. It plunged from the sky and hit the road so I had to build a new fuselage (which is why there are two different colour schemes in the photos).

Taking photos of this model in flight was difficult. Malcolm Logan and I took turns flying the model and wielding the camera. As the model is so small I had to use the 240 mm telephoto lens which gives a very small depth of field. As I write in October, Thailand is not the land of sunshine, which means slower exposure and wider stops. Even at low throttle, the model whips past with very high angular velocity but we took a lot of pictures and I hope that they may encourage you to try a Junior 30!"

Mike Hawkins' half size Junior 60 (Junior 30...) from March '96 RM. I hesitated to scan this one as the original hard-copy is badly distorted and had a large step in the printing. I've fixed the step but the distortion remains (I wonder if all copies were like that or if my mag was a bad batch?). Anyway, I couldn't not scan such a classic model and maybe builders can use it as inspiration and actually build over a scaled copy of your existing Junior 60 plan!

Update 20/08/2020: Added replacement CAD redrawn plan, thanks to Miguel (both dxf and pdf format). Have shuffled this listing around now, so the main plan download is Miguel's re-drawn vector PDF. The badly distorted previous scan (as printed in RM 1996) is available as a supplement. 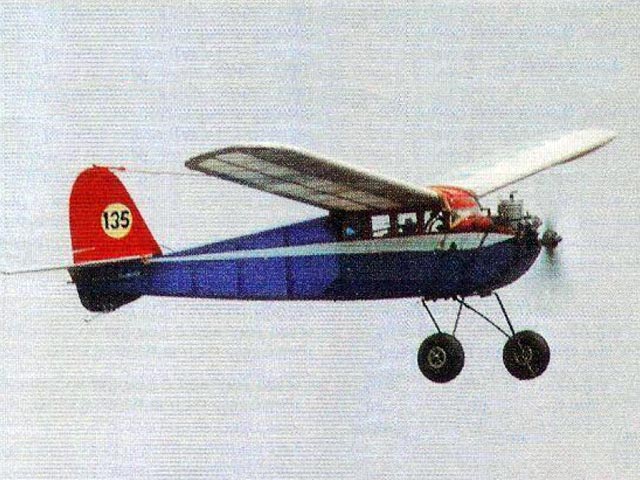 Good gracious me, is it me or does that plan come with a complex multi-dimensional warp?
Miguel - 01/08/2020
Miguel is right, there are definitely some skewed parts in this one. The fuselage cross-members look like they were drawn at right angles to the elevator pushrod, instead of the fuselage centerline. But here's a real corker: the bottom of the wing is at 0 degrees, while the stab is several degrees positive!? Maybe I'm just dumb, but I don't see how the airplane could possibly fly like that.
Phil - 01/08/2020
Sometimes the original drawing gets to shift on the scanner plate. The two wing halves are off by 1/4in and there are some other inconsistencies but what matters is that this is a nice plan that requires a bit of restoration work, that's all.
Miguel - 02/08/2020
I've started work on restoring this plan to its pristine geometry, before M Hawkins let the dog sleep on it. I'll have it done in a few days, depending on time available.
Miguel - 03/08/2020
Add a comment