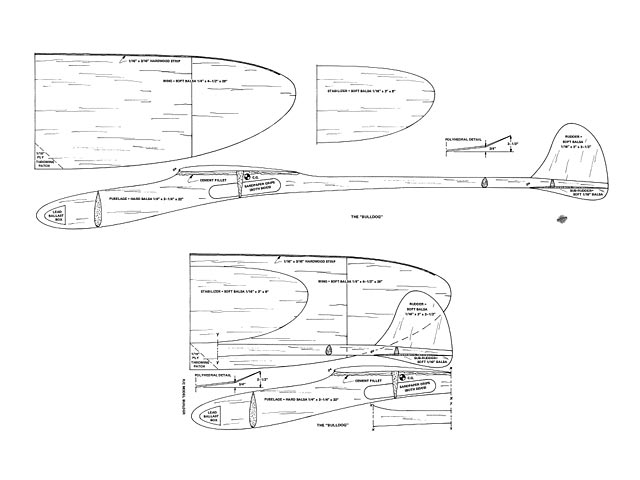 Quote: "An all-out competition HLG, a bit larger than most, for experienced builders and strong arms. It's the 23rd (and best) in a series of HLG's designed by the author.

In recent years the popular model magazines have featured a substantial number of so-called 'beginners' projects. Before proceeding further with this article, I feel it should be made clear that Bulldog does not fit into this category. On the contrary, Bulldog is a hand-launched glider designed for the experienced modeler with a better-than-average throwing arm.

This model is the twenty-third in a series of original hand-launched gliders which I have built over the past decade. It was christened Bulldog because its abilities to stay together on the most powerful launch and to soar on the slightest thermal reflected the tenacious qualities of its namesake.

Bulldog's predecessors ran the gamut in respect to size, proportions, weight, and force arrangements. Through the experience gained from these models, the basic design on these pages gradually evolved.

Bulldog is somewhat larger than the average outdoor hand-launched glider, yet it is not so bulky that the modeler with a good throwing arm cannot achieve impressive height on the launch. In addition, the relatively large size and low wing loading enable this model to float on upcurrents to which its smaller competitors do not normally respond. And probably most important, the large size tends to keep the model in sight longer after it catches a thermal.

The fuselage profile of Bulldog provides a relatively large, low frontal area. This tends to lower the center of gravity and makes the rudder area less critical. A polyhedral, undercambered wing with fairly shallow polyhedral angles is used in conjunction with this fuselage design. Such a combination provides excellent lateral and longi-tudinal stability. Bulldog is a stable flier in both calm and windy conditions, with neither the lateral rocking nor susceptibility to spins prevalent in many hand-launched gliders.

So much for the history and design theory behind this model. I believe it is sufficient to say that when properly built and flown, Bulldog will present a threat at any contest.

CONSTRUCTION: These instructions will be brief, since the reader is assumed to be familiar with hand-launched gliders. In general, try to use the designated grades of balsa in order to keep down the weight. Bear in mind that the performance of the glider will be in direct proportion to the care used in its construction.

RUDDER AND STABILIZER: Select some 5-6 lb semi-quarter grained 1/16 sheet balsa for the tail surfaces. Cut them to their required outlines. The rudder is sanded to a streamline shape. Sand the stabilizer into the airfoil section shown on the plan.

WING: The wing is the main element of the model and requires the most effort to build. Start work by choosing a sheet of 5-6 lb semi-quarter grain balsa 1/4 x 4-1/2 x 20 inches long. Cut the wing to the proper outline and then glue the 1/16 x 3/16 spruce strip to the leading edge. When this is dry, taper the wing blank from a 1/4-inch thickness at the center to 1/16 inch at each tip. Next, sand the proper undercamber into the lower surface. Then carve and sand the wing into the final desired airfoil shape. Finally, cement in the required poly-hedral angles as shown on the plan.

FUSELAGE: Use a piece of 15 lb. balsa 1/4 x 2-1/4 x 22 inches long for the fuselage. Carve and sand it to shape using the cross-sections shown on the plan. If desired, the fuselage may be built up using a 3/16 x 3/4 inch piece of spruce for the tail boom spliced or laminated into a for-ward section of balsa.

ASSEMBLY: Glue the stabilizer in place, followed by the rudder and sub-rudder. When these are dry attach the wing, ensuring a good fit between fuselage and under-cambered section. Install the throwing patch and check alignment throughout. Double coat all glue joints for added strength.

Bulldog should balance at the CG point on the plan. I have long favored permanent ballast over modeling clay, since balancing clay can produce up to three times the coefficient of drag as the normal fuselage cross-section. Per-manent ballast in theform of lead can be inserted in the nose and smoothed over with glue or plastic wood, thus per-mitting a smooth fuselage contour to be maintained.

FINISHING: Two coats of thin nitrate dope should be sufficient for the empennage and fuselage. I recommend the following procedure for the wing. Rub talcum powder into the pores of the wood and wipe off any excess. Seal the powder with one coat of thin nitrate dope. Then sand the wing smooth. Complete the finishing process by applying two more coats of nitrate dope and then polishing the wing with automobile wax. Be sure to add your AMA license number to the upper right wing as shown in the photo-graphs.

FLYING: Bulldog should weigh about 1.2 oz complete. Before attempting test flights, remove any warps which may have appeared in the flying surfaces. Then adjust model for left circles of about fifty feet in diameter. Because of its size and polyhedral arrangement, Bulldog can safely handle a consider-able amount of rudder. For best results, the glider should be launched at a 45° angle to the right. When properly adjusted and thrown, it should make about three-quarters of a turn to the right before leveling off into a left glide. Alter direction of launch until the model pulls out on top, heading into the wind. Practice launching the Bulldog until you are confident the model will pull out into the wind under varying weather conditions.

Under present contest conditions, the hand-launched glider event inevitably involves an element of luck. I firmly believe, however, that you can become more consistently lucky by developing your ability to find and launch into thermals. In this regard, do not hesitate to piggyback off a competitor circling overhead in a thermal. You can be certain your competitors will piggyback off you if they can!" 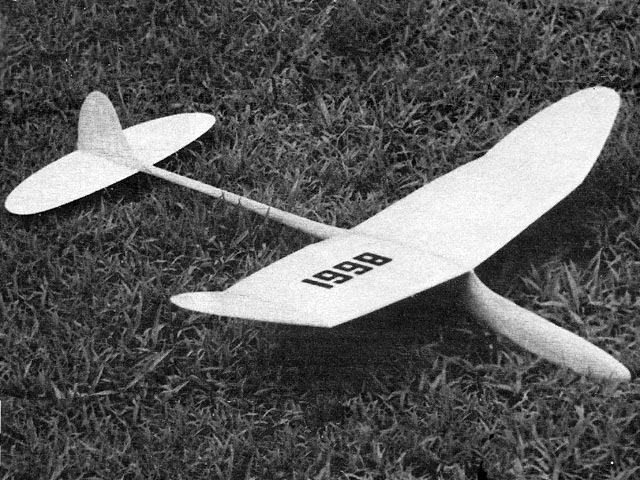