Record Hound 020 Replica. How time flies! It seemed like only a few months ago that we published an article and plans for Henry Struck's Record Hound (oz5079) design, and yet, when we looked it up, it was exactly two years ago!

Dave Sweeney designed the .020 version to follow closely the construction of the original. The wings are very standard, and need no explanation. Stab ribs are shaped after the framework is completed, in a manner similar to the construction of Taibi's Powerhouse (oz5644).

The original .020 rudder was formed of 4 laminations of .020 by 1/16 bass or spruce, soaked in hot water and bent around a cardboard form. However, Dave recommends the substitution of a 1/20 sheet rudder, as the original warped badly after a couple of hours in the sun and nearly caused a serious accident.

The fuselage is a simple crutch-type framework, with the top half built first. The engine was inverted in the original, and there is plenty of room to invert it in the replica. Dave mounted the engine upright in his prototype replica for easier starting.

IMPORTANT: When building the bottom half of the fuselage, the crutch must stay absolutely horizontal, with no up or down warps or pulls, as any variation from horizontal will change the wing and stabilizer incidence settings.

For a dethermalizer, Dave hinged the whole rudder-stab assembly at the point shown on the plans. He used a nylon R/C hinge, cut to size and epoxied to 1/16 sheet balsa glued between the crutch longerons. A pin-type hinge was used on the prototype, but Dave suggests that a new 'live' hinge might overcome the pin-type's tendency to become wobbly. He points out that a friend built the model with the stab hinged at the rear, allowing the leading edge to drop down for dethermalizing." 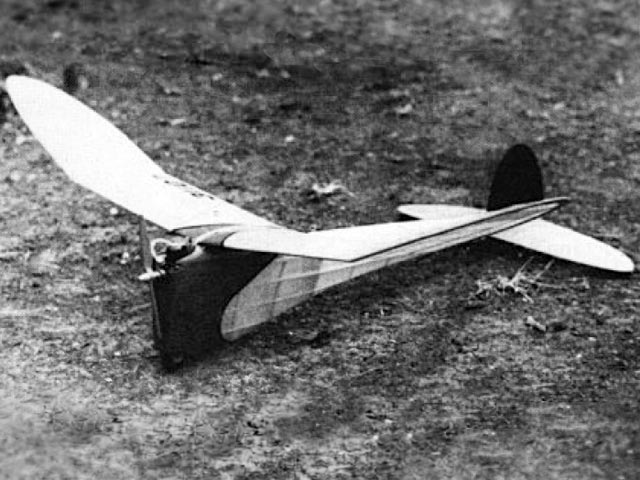