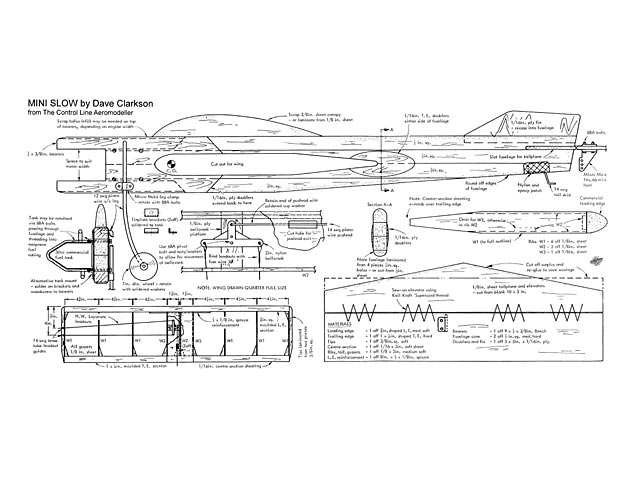 Quote: "A simple, functional model for 2.5-3.5cc engines, suitable as a trainer, sports flier or as the basis for a new club contest. Mini Slow, by Dave Clarkson.

MINI SLOW arose out of a desire in the North West to create a type of fun contest where all control line modellers, whether they be combat, stunt, speed or racing fanatics - or just the average Sports flyer - could compete together on an equal basis. The rules were eventually established on the following principle:

Each entrant, on his own except for one assistant whose only function will be to hold the model when so requested, shall fly his model a set number of laps from a 'LeMans' Start. The entrant will re-fuel and re-start his model as necessary to complete the lappage required. The number of seconds taken from the start signal to the race completion shall be recorded. During this period, a set schedule shall be pelformed and these will be subject to simple judgement. Completion of each manoeuvre will gain a bonus according to the excellence of the manoeuvre. The total bonus points accumulated during the race will be subtracted from the flight time in seconds to give the final score. The entrant with the lowest score will be the winner.

A simple principle in which neither models built for great speed nor great manoeuvrability should be unduly favoured, and which requires entrants to be competent both as pilots and pitmen and, for success, to be physically fit. So that all models would be comparable and yet allowing some room for design innovation, the following model rules were adopted:

Motors: 3.5cc maximum.
Lines: 52ft 3in from centre line of handle to centre line of model. Three-strand lightweight steel lines only.
Tanks: 30cc commercial 'stunt' type only. No 'quick-fills' or pressure systems. Squash bottle only filling.
Propellers: Commercial nylon props only.
Wing: Minima: span 30 in, area 250 sq in, thickness 3/4 in.
Fuselage . Profile type (max. width 5/8 in excluding tank and optional nose side cheek). Minimum length 18 in from elevator hinge line to motor prop driver face. Tank must be entirely in front of the wing. No motor cowling from motor mounting lugs up. Must have fin and canopy of reasonable proportions.
Undercarriage: Minimum requirement of a fixed mono-wheel undercarriage that allows unassisted rise of ground. Minimum wheel size 1 in diameter.

To complete the rule package (except for pilot conduct and safety requirements), the race distance was set at 80 laps and the manoeuvre/bonus points schedule was fixed as being: [see table].

Obviously each race was a solo affair and, despite the apparently simple and basic requirements, a rather exciting event too!

Mini Slow was conceived to fit these requirements and also designed to be about as quick, easy and cheap to build as possible. The plan and these instructions reveal just how this meets the bill, while the photographs reveal that it is not that unattractive, despite its basic form! However, unless you build one yourself, you will never know how nice it is to fly and how manoeuvrable it can be - a good pilot should be able to fly one without much difficulty through the entire SMAE stunt schedule, producing at least recognisable manoeuvres: squares, triangles, overheads, the lot!

To just about everyone's surprise, Mini Slow has turned out to be an ideal Sports model, because by just varying the elevator throw it changes from a really docile trainer into a fully manoeuvrable stunter. Just right for your first 'real' model after a basic trainer.

Construction: The wing, tail and fuselage are very simple structures and do not come together until a final assembly operation prior to finishing, therefore simultaneous construction of all three components is possible, and is recommended, for speed of construction.

Start by cutting out a complete kit of parts (you should find the wood list on the plan quite sufficient despite its brevity) so you can be gluing one part whilst another is drying. This way, building time is reduced to an evening or two.

First cut ten ribs to the W1 profile, then trim four of these to the W3 profile - then notch three of these for the bellcrank platform to give one W3 and three W2's. Glue two W2's together to give the centre rib. Using a worn 1/4 in drill, drill the leadout ways through the inboard wing ribs. Now trim the leading and trailing edge sections to length, pin the trailing edge to your building board and glue the ribs to it, making sure that they are square to the trailing edge. You should find that, with the trailing edge pinned flat to the board and with the lower rear portions of the ribs also pinned flat to the board, the upper rear surfaces of the ribs and the trailing edge also form a straight line. Before the glue sets, add the trailing edge/rib joint gussets and allow to dry. In the meanwhile, accurately position and glue the 8 in length of 1/2 x 1/8 in spruce to the rear face of the leading edge section, and cut the bellcrank platform to shape from 1/8 ply.

When the rib/trailing edge glued joints have dried, remove the pins holding the frame to the board and then re-pin the frame to the board so that the lower front portions of all of the ribs are flat on the board. Do this with the wing 'upside down' so that after gluing and pinning into position the leading edge section, the bell-crank platform can be added. Whilst the leading edge and bellcrank platform/rib joints are drying, make-up the tips from 8in lengths of 3/8 sq balsa, not forgetting the inboard tip for the leadouts. Once assembled, the tips can be glued to the board and the leading edge/rib gussets and lower centre section sheeting added (note that the centre-section sheeting goes over the trailing edge, so as to provide additional strength here).

Once the glue on the wing frame has completely dried, it can be removed from the board and the controls installed, followed by the upper centre section sheeting. The wing is now complete except for sanding the tips to shape, and sanding down the bumps gently off the completed structure, both of which can be done now..."

Quote: "Hi, Steve and Mary. I’ve seen here isn’t any copy of the plan of Dave Clarkson's Mini Slow model. That model was one simple C/L sport/trainer published, as center fold plan, in the Control Line Special Edition of Aeromodeller magazine in 1978 who is in your sister web page RCLibrary, with reference: RCL#1308.
Time ago, I found one full copy of the plan at the Plans Gallery of Hip Pocket Aeronautics, see https://www.hippocketaeronautics.com/hpa_plan... and now I’ve made a CAD redraw of it. So I send you the original copy of the plan in PDF format, one copy of the construction article, and my CAD redraw. As usual, the last is in both PDF and in both CAD vector formats: DWG and DXF. By the way, in my CAD redraw, the wing is draw in full size.
Thanks for all, and greetings.
Valeria367. 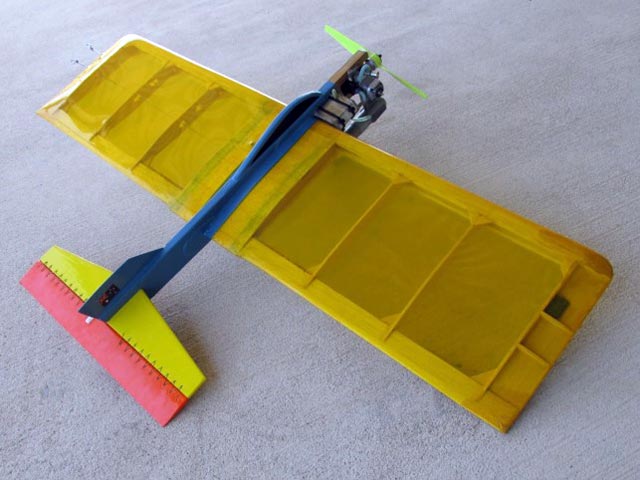 Hello Mary, I am still enjoying the Outerzone web site. Here are a few photos [main pic, 006, 007] of my recent build of the Mini Slow control line model. Ready to fly again. Engine is an OS 15LA with a Taipan propeller. Flies well on the fifty foot lines. This is a simple plane to build and quite strong. Regards,
Mal McKenzie - 02/11/2020
Dear fellows, follows another one finished after the great Outerzone Plans! Mini-slow, built by Fred Cesquim [pics 008-011]. Engine is COX15 finished in monokoted wings and painted fuselage. Ink lines and clear coat for shiny looks. Thank you! Regards from Brazil
Fred Cesquim - 01/07/2021
Add a comment