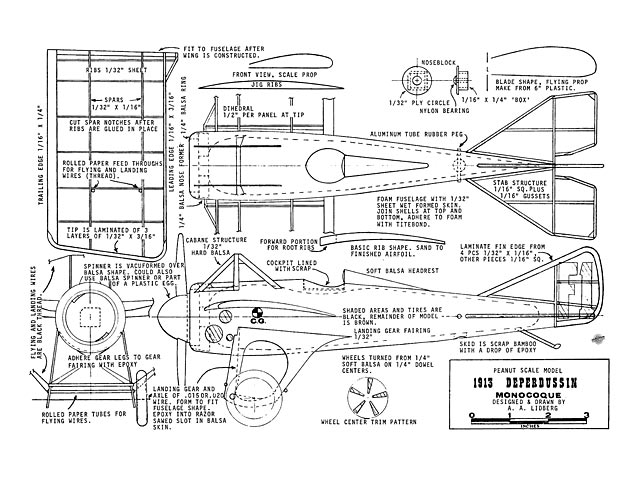 Quote: "Whether you happen to like this little sausage or not, there's still a valuable lesson to be learned on the technique of building with foam, so slow down and take a longer look

This model was designed and developed as an experiment in construction techniques. I wanted to see how foam handled and how well it could be used to duplicate the shape and appearance of a monocoque fuselage. Light flying models have traditionally used formers and stringers to duplicate this type of construction, but the resulting surface is far from smooth and detracts from the scale appearance.

Deperdussin seems to have originated monocoque construction, so one of their planes is an appropriate example. The fuselage on the full-scale racing plane was made up of 3 layers of tulip wood glued together on a form. When dry, the form was removed and the shell was covered on both sides with fabric which was glued on and varnished. The thickness of the finished shell was about an 1/8 inch. Conventional wood ribs and spars covered with fabric were used for the wing and tail. Flown by M. Prevost, this plane won the 1913 Gordon Bennet race at Rheims, France, averaging over 124 mph on the 124.3 mile course. The plane is a true pioneer, considering its vintage and its accomplishments. Due to legal and financial problems, Armand Deperdussin's firm went bankrupt. Under the guidance of Louis Bleriot, the revived company was known worldwide by its initials (SPAD), the designation of its WW I fighter plane.

Because this model project was an experiment, some lessons were learned, so I can share the failures as well as the successes with other modelers. I started by making up some test sections of foam to see how it reacted to various model finishes and glues. I knew that conventional model cement and dope could not be applied directly to foam because of the dissolving effects. White glue was applied to smoothly sanded foam and appeared to provide a usable surface, but one that could stand more surface strength. Next, silkspan, applied with both white glue and Titebond, was tried. This seemed to be a good compromise between weight and strength. The best choice, at this point, was Titebond and one layer of silkspan, which produced a fairly strong skin. White glue acts about the same but cannot be sanded smooth.

I then made up a foam fuselage which was covered with about 6 pieces of silkspan (to conform to the cylindrical contour) applied with thinned Titebond. After the fuselage had dried overnight, I put on a thin coat of nitrate dope with micro balloons added to fill in the pores of the silkspan.

During the next 20 minutes, wrinkles began appearing in the surface and, as another 20 minutes passed, the wrinkles grew larger until the whole fuselage looked like a prune! While nitrate dope ordinarily dries quickly, and especially so in the 10 or 15% humidity of the Arizona desert, the porous nature of the silkspan had allowed dope fumes to penetrate to the foam and the foam 'went away'. This was quite a setback, and I moved on to some other model projects for a few weeks. My interest in the Deperdussin plane remained however, and eventually I came across an article by Hal Cover, describing foam models covered with 1/32 sheet balsa. That article provided the inspiration for this project, as balsa plus Titebond glue creates an effective barrier between foam and dope, while producing an extremely strong model.

Throughout construction of this model, remember to keep it light. Although limited in wingspan by the Peanut scale rules, the fuselage is long in proportion to the wing. Thus, excess weight near the tail must be offset by more ballast weight at the nose, resulting in a heavier-than-desired model.

Construction of the fuselage is the most interesting part of the model, so let's start there. Get some light insulating foam from a building supply store, or scraps of foam from an R/C flyer. You won't need much; 2 pieces measuring 1 x 2 x 10 inches will make the fuselage. Tack-glue the pieces lightly together to make a block 2 x 2 x 10 inches. Trace the side view of the fuselage onto one of the original 2-inch sides, so that the joint between the blocks becomes the vertical centerline of the fuselage. Leave a bit of extra material around the outline when cutting, which can be easily done with a hacksaw blade. Now trace the top view on the block and cut it to shape. Cut the nose former and ring from 1/4 inch balsa. Cut the nose-block hole in the former, glue the ring to the former, and glue the former to only one of the foam blocks ... so you will be able to split the blocks apart later for hollowing.

The body is circular in shape at the former, becomes more oval-like at the cockpit, and tapers back to a knife edge at the rear. Begin to shape the foam with a very sharp knife. Sand with 100 grit paper progressing to about 320 grit. Exercise some caution in carving and sanding, as the foam will tear or crush if you use too much pressure. Don't cut out the cockpit yet, as it would complicate the
covering process.

Now, separate the foam blocks along the original seam using a thin knife, in preparation for hollowing. I used a piece of copper electrical wire formed into a bulged "U" shape in place of the soldering tip in a Weller solder gun. This gadget cuts foam at a controllable rate, because it can be switched on and off as needed to control the temperature. Try to hollow the foam to about 1/8 inch in thickness (less if you're brave, but you run the risk of cutting through to the outside surface), leaving a bit more near the landing gear and the nose former. Hollowing could also be done with a knife and sandpaper, if desired.

Rejoin the fuselage blocks with Titebond and it's time to cover the fuselage. Get some soft, easily bendable 1/32 x 3 sheet balsa and cut two 10 inch long pieces, which will become the fuselage shells. The shell pieces can be sanded quite a bit to lighten them. Leave them rectangular at the front of the fuselage but some material should be trimmed away at the rear to simplify the forming process. Soak one of the shell pieces in warm water for half an hour. Blot the excess water from the balsa and wrap the shell piece around one side of the fuselage, holding it on with masking tape or gauze. Pull the sheet rather tightly around the nose ring. Minor crushing or wrinkling of the balsa won't affect the finished body very much, as the shells will be trimmed and some filling and sanding is inevitable.

After letting the shell dry overnight, trim the top and bottom edges of the balsa so that they lie just at the foam block joint. Put that shell aside and form the other side in the same manner. When dry, trim the second shell to join up to the first shell and, when they are aligned, remove them both for gluing..." 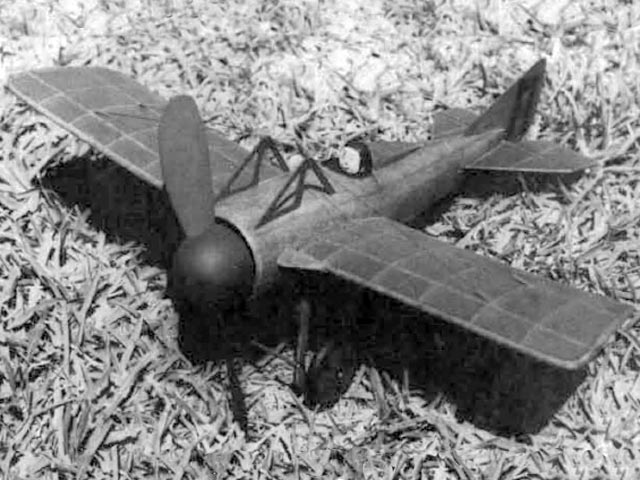 I'm surprised we don't see more plans for this Deperdussin racer. It was a beautiful design and way ahead of it's time. Astonishingly modern, for 1912.
SteveWMD - 27/07/2020
Add a comment