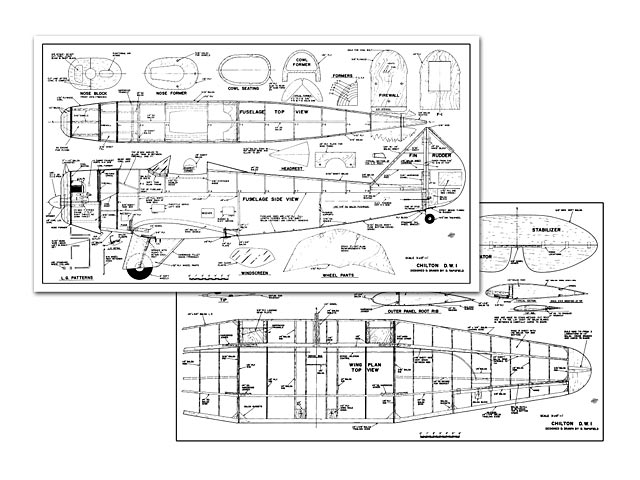 THE DAY I acquired an OS .60 four-stroke engine, I began looking for a suitable prototype in which to install it. I really wanted to mount it upright and the model had to be large enough to be interesting and to produce a reasonably low wing loading to take account of the power output of the four-stroke. Having read the performance figures on the full-size machine, the Chilton seemed to be the ideal subject. It was a simple, basic airplane, perhaps not beautiful to look at (although beauty is in the eye of the beholder, they say), but really full of character.

The design of the full-size prototype began in 1935 when AR Ward and the Hon Andrew WH Dalrymple, both aged around 20, met. Both were students at the DeHavilland technical school at Hatfield. They planned to use a Carden Ford converted car engine for the powerplant. This was a water-cooled unit with dual ignition that developed around 30 hp and it amazingly gave the Chilton a top speed of 112 mph and a cruise of 100 mph. If the proposed model had similar character-istics, it would be ideal for my purpose!

I decided on a scale of 3-1/2 inches to 1 foot, which would produce a model of 84-inch span and 63-inch length, with a wing area of 1,000 square inches. The model is silver and red based on the prototype. Several of these machines were subsequently built that used other engines, including the inverted air-cooled Train of 44 hp. Unfortunately, the war intervened and no further development took place. It is interesting to note, however, that I know of at least one that is currently being refurbished and another being built from scratch! If you're still interested, we can start.

CONSTRUCTION: Cut the sides from 1/32-inch ply and cover these with 3/16-inch sheet balsa. You may have to join the balsa to produce pieces large enough. That's okay, but be sure to stagger the joints so as not to cause any weakness. Use balsa cement or white glue for this job, and a contact adhesive, such as Weldwood, to stick it to the ply.

Cut out all the formers and join the sides together in the normal way, starting with the firewall and former 1, both of which should be epoxied in along with their gussets. When set, add the 1/2 x 3/8 stiffeners in the cockpit area, and the 1/4-inch sheet around the wing seating. When that's set, draw the tail end together, add all the spacers and the deck formers, then finish the fuselage to the drawing. Don't forget the nylon tube for the receiver antenna. Keep the tail as light as possible.

The cowling is made from 1/32 ply that's been soaked in hot water for a couple of minutes. It can easily be bent to shape and, if held while it dries, will stay that way indefinitely. It's really easy and most rewarding. There is no need for elaborate formers to do this; any old tin, bottle or block of suitable size is okay. The wheel pants are made in the same way.

The tail unit assembly is very straightforward. Choose a grade of balsa to keep the unit as light as possible. Remember the blocks for the hinges, etc, on the fin and rudder.

I made the wing on my model from foam, and the root and tip rib templates, together will all the information on details, are given on the plan. To join the wings, two short pieces of brass tube that are each about 1-inch long and that will fit over the aileron control snakes, will be needed. These will prevent the epoxy you'll be using to join the panels from getting to the snakes and will also keep them aligned. Use plenty of epoxy. Don't use the five-minute kind, you'll need longer than that to do the job. A good, flat building board will help you finish up with a true wing.

Make sure that the epoxy goes right to the edges of the joints. When set, cover the joint with one layer (yes, one layer) of 1-inch wide 6-ounce glass cloth glued on with PVA (white glue). I have proved by practical test that this is stronger than the surrounding veneer!

Most of the built-up construction should be clear from the plan; however, let me add that you must cut all the ribs required. The ones for the outer panels may be made by stacking the right number of blanks between the root and tip ribs and sanding to shape. Build the center section and the outer panels on the plan, being sure to not forget the angle on the root ribs or the packing to produce the wash-out on the outer panels..." 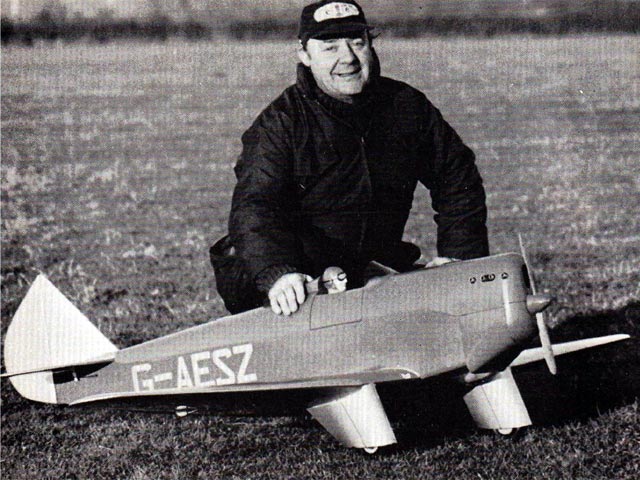