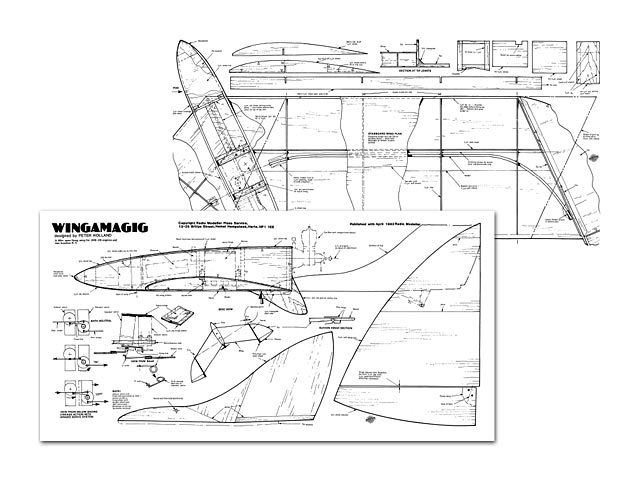 A flying wing for 0.49 power and two function R/C - it has a novel servo linkage - is quick to build and docile or sporty to fly.

THIS LITTLE offering for the small engine brigade started life way back in the early 50s, as a sticks and tissue free-flight machine. It was light and stable with its flat plate wingtips curled to a slight reflex at the TE and a 0.5c c Dart would take it up surprisingly fast for its large wing area.

Whilst looking around for a simple design for two function radio the old plan came to light (banana oil splodges and all!). Clearly, ii needed to have a more rigid structure to withstand the higher flying speed and G forces to be expected with a larger engine and radio payload.

I worked within the outlinfusing only 12 ribs, a web type spar anchsoftish skin for the wing proper, changed the pod to fit the radio and for test purposes, mounted a reproduction Mills 75 on the back. The model might be capable of using engines up to .09, but watch the CG and if the motor is not reversable (reed valve types are) use a pusher prop.

Don't compare the power loding of this flying wing with that of conventional models - there is very little parasitic drag, a small pod and the fins act as drag reducing fences where the wing tips join the wing.

Wing construction: Using 1/16 x 4 in softish sheet, mark out the shapes of the eight wing skin panels -four sheets provide enough material. Edge join pairs of panels along their long sides, mark the spar and rib positions on the inner face and sand the outer face of all four pieces. Chamfer the trailing edge ofthe lower sheets as shown on the plan and pin down flat, butt joined in the centre with a 1/32 ply strip. Cut the web/spars and ribs from medium hard 1/16 sheet (scrap box sized bits). Glue a strip of 1/8 sq onto the top of the lower skin, followed by spar and ribS. Cut a hole in the boitom skin for linkage access. When the glue is set, pierce the ribs and install the snakes and a couple of joined drinking straws for the aerial duct, then chamfer the 1/8in. sq. leading edge.

Pod: The shape shown will just take Acorns radio and as no mechanical mixer is needed, other than the method of mounting the servos, there is little waste space. The pod is built onto the finished wing, so first recess a strip of 1/4 x 1/8 spruce flush onto the spar web at the front edge of the servo well, the other servo bearer is glued onto the top skin. Check that the servos have plenty of clearance and notch the bearers for the little gussets on the tops of the Acorns servo's lugs. Mount the roll servo on grommets with its disc in the wing. Now join two strips of 1/32 ply with fabric tape and join the two servos with double sided tape to this, leaving 3/16 in gap between - per drawing. The pitch servo can now rock sideways in the clearance hole. If satisfied that all is well, epoxy the formers in position, cut out the fuselage sides, and glue in position. When set, chamfer the inner edges at the nose and fit the nose block. Sheet the front but leave the hatch and rear top panel until the engine is in place.

Fitting the tips: Sand the ends of the wing and using Sel-lotape below, glue the tip panels edge-on, laid on a flat surface, but with their TE's wedged up 1/8 in. Glue the fins on and add a 1/4 in triangular fillet to reinforce the joint.

Covering: Solarfilnn was used, dark below, light on top to aid orientation, the firewall (F4) was fuel proofed before mounting the engine, then the fuselage top finished and an 1/8 sheet hatch made. Leave the access hole in the bottom open until the linkage is complete, then seal with a carpet tape patch. Scrape the film from the bottom to glue a 1/8 ply launching grip in place - it's easier that way.

Linkages: Make up 16g welding rod, or cycle spoke wire links as shown, bind and solder to the snake wires and form the 'roll link' carefully. This goes around the pitch servo's disc hub and is hooked into an inner hole on the roll servo disc - a reverse mode servo is needed for the latter as the horns are below the elevons. Both servos should be parallel at neutral and each snake connected to opposite sides (front and back) of the pitch servo's disc. Test with the radio that both snakes push for 'up' and the left one pushes whilst the right one pulls for 'left'. Connect to the horns with clamp type clevises and set up to give 1/2 in up and down for elevator (slightly less for roll and obviously more for combined action).

Flying: Check that the model balances correctly. Move the Ni-Cad to adjust. Test glide over long grass in the old fashioned way with radio on power on for a short run, launch level and go steady for altitude - the prototype is docile and even power-on belly flops are acceptable! - so the lack of throttle is not a handicap. Funny to think that this machine, which looks like an inter-galactic space cruiser, started some thirty years ago!" 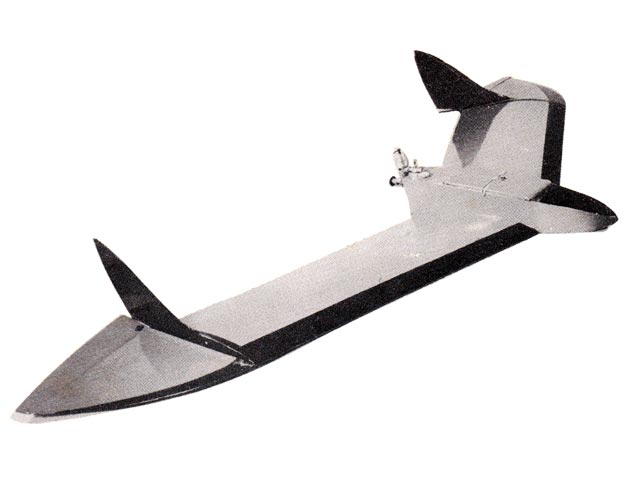 Attached please find a photo of my Mk.II Wingamagig [pic 005]. I built the original when the plans were first published and it flew so well that when it died I knew there would have to be another. The new one is scaled up 1-1/2 times and will be electric powered.
Peter Cary - 03/08/2020
Look good Peter! A 1 1/2 times version is on my to do list. Is yours all balsa? I had planned to use depron 3/16 sheet with local ply reinforcements and electric power as you have done.
Alistair Taylor - 05/08/2020
Hello Alastair: Yes, mine is all balsa and built exactly the same as the plans show. The motor I have lined up for it is a Turnigy 3530-1400 with a 2200mah battery for electron source and nose weight. Making a battery mount has been a big hold up but I think I have it solved thanks to a friends 3D printer. It's been a long time since Mk1 but this should provide just as much enjoyment .
Peter Cary - 06/08/2020
Add a comment