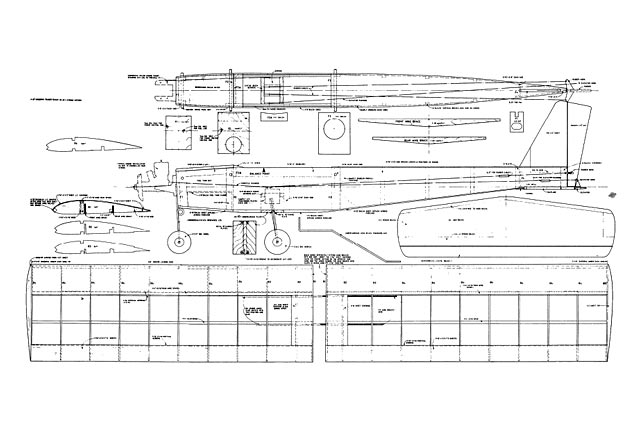 BUILDING THE 'PRONTO G' WILL probably be your first venture into constructing a flying model so we will make it as painless as possible. You will see that the fuselage is a simple sheet box structure (its only function in life is to support the engine, wings, tailsurfaces and undercarriage at the required positions). Tailsurfaces are similarly simple, being from sheet balsawood. A built-up wing construction is retained, the alternative is to use veneer covered foam cored wing panels, but these are definitely heavier and for that reason less suitable for our trainer. As mentioned before - and will be emphasised many times - weight is the enemy of flight and we must always strive to keep all parts of our aeroplane as light as possible.

You will notice that the wing has a flat bottom wing section, based on the ubiquitous Clark Y aerofoil section. As with many aspects of designing a basic trainer the selection of wing section is something of a compromise. A bi-convex (often called semi-symmetrical) section would allow the model to be flown in higher strength winds and minimise the effect of 'ballooning' - the nose rising and model climbing after a diving turn has built up excess speed. However, the flat bottom section produces a lower stalling speed ie slower safe flying speeds - but most importantly, the wing can be built flat on the building board.

Constructing the wing panels flat and leaving the glue to dry thoroughly before removing the structures from the board, helps to ensure that there are no twists in the finished wing (warps). It is still possible for warps to be induced at the covering stage, unless care is taken, but at least the wing structure is sound. Having to wait a while for the right flying conditions is a small penalty to pay for having the right model, it may also prevent you from trying to fly when the conditions are unsuitable for the raw beginner.

Clear the bench: So, we have looked at the drawings and photographs, read through these instructions, cut out all the parts, pinned down and protected the plans on a nice flat building board, and we are ready to go. If you are using a relatively slow drying glue for most of the construction it is as well to plan the building programme. If, for instance, you construct one wing panel you will want to leave this on the board, at least overnight, and to be able to carry on with some of the other building.

Wing: The wing structure is built in two separate panels (make sure you build a left and right hand panel) which, after shaping and sanding, are glued together and joined with dihedral braces. Note the wing cross section shown on the drawing, this is taken at the centre area of the wing where additional 1/16 top sheeting is included to take the load of the rubber band wing retainers.

Start by pinning down lower main spar, rear spar and lower 1/16 x 1-3/4 in trailing edge over the plan. The pins can be pushed at an angle through the sides of the spars and into the board. Glue onto the spars and trailing edge all wing ribs R1 to R4, noting that the root rib, R1 is angled to allow for the wing dihedral when the panels are joined. Look down the front of the ribs and ensure that the notches for the leading edge are fully aligned.

When the ribs have set the top main spar and top trailing edge are glued in position, you will have to remove some of the pins retaining the lower trailing edge to fit the top piece. Again referring to the cross section, you will see that vertical webbing is glued between the main spars (continuous on the rear, in selected positions on the front) and between the trailing edge pieces. Cut these webbing pieces, with the grain vertical, accurately to shape and glue them in position. The trailing edge webbing can be a little 'fiddly' to position, stick a pin into the part to aid positioning..." 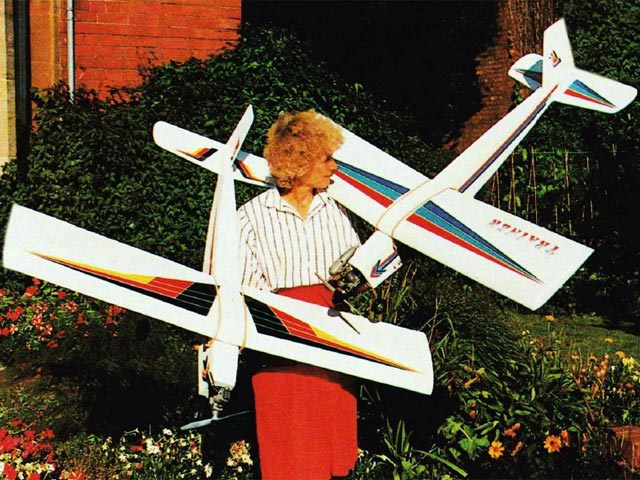