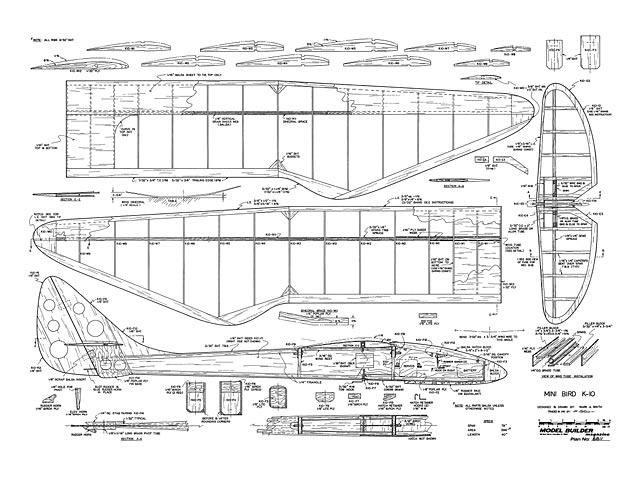 Quote: "By Mark Smith. A two-meter version of Dave Thornburg's Bird of Time (oz2093) by one of our nation's foremost glider guiders. The 'Minimoa' wing planform is a trademark of this design.

Mini Bird is the answer to the question asked by many R/C sailplane pilots: What can I build that is not a fragile blimp, that can be flown in both calm and windy days, yet won't have the flight characteristics of a brick outhouse?

We think you will agree with us when you see your two-meter Mini Bird 'scoot' up to the top on tow, streak off to a thermal, then slowly circle up and up until it is a mere speck against the clouds.

If the plane has drifted with the wind, as it circled in the thermal, you will be pleasantly surprised by the way Mini Bird can penetrate the headwind and return to the launch area.

Before you start construction you have a major decision to make. What airfoil do you want on your Mini Bird? Mark's Models has introduced a new concept to sailplane kits by providing two sets of wing ribs in this kit. if you decide to build the 11% thick wing then go over the die cut rib sheets and apply cyanoacrylate adhesive to the cut that forms the 8% ribs.

If you do not know which wing to build, then build the 11% wing. Thin wings are fast in flight but a lot of skill is required to fly an 8% wing. So, if this is your first or second sailplane then build the 11% wing. If you are the local 'hot pilot' on the R/C sailplane contest circuit and you know you can handle a 8% thick wing, then go for it! (I wonder what kind of a wing you could get out of the thin ribs that are left over when you build an 8% wing!) Another decision is a two-piece or one-piece wing. The one-piece wing is easier to build and a little bit lighter, while the two-piece wing is easier to transport.

1. Tape the drawing of one of the inner wing panels to the work surface. Tape a sheet of wax paper or plastic wrap over the drawing.

3. Cut the 1/8 sheet balsa shear webs to fit and glue them in place. Be sure that none of the shear webs extend so high that they will hold the spar above the top surface of the rib where the 1/16 sheet balsa is glued in place. Do not install the 1/8 poplar dihedral brace at this time.

4. Glue the top spar in place.

6. Build the other inner wing panel to this stage of completion.

7. Install the wing wire tube in each panel for the two piece wing. Drill an oversize hole in the ribs to provide clearance for the tube. Plug the ends of the tube with 1/16 balsa, use the tube it-self as the 'plug' cutter. Chamfer the inside corner of the tube that will be at the junction of the wing panels. Remove any tarnish from the outside surface of the tube with sandpaper and wipe the surface clean with a cloth and acetone. Coat the center of the 7/32 dia wing wire with parafin or oil so the epoxy will not adhere to it. Set one center section panel flat on the work surface and butt the other panel up against it with the wing tubes and wire in place. Raise one panel so that the end is 2 inches above the work surface as shown in the 1/8 scale drawing on the plan. When the panel is blocked up to the proper height and the panels are aligned with each other, put the 7/32 filler blocks under the tubes and epoxy the tubes in place with spots of five-minute epoxy, or cyanoacrylate and baking soda.

8. After the epoxy has cured, remove the panels from the work surface and complete the installation of the tubes. Fill in the voids between the tubes and the spars with filler blocks and epoxy. As soon as the blocks and epoxy are in place, install the front 1/16 plywood shear webs. The wing panels will have to be resting vertical on the trailing edge until the epoxy cures... "

Update 22/09/2020: Replaced this plan with a clearer version, thanks to theshadow. 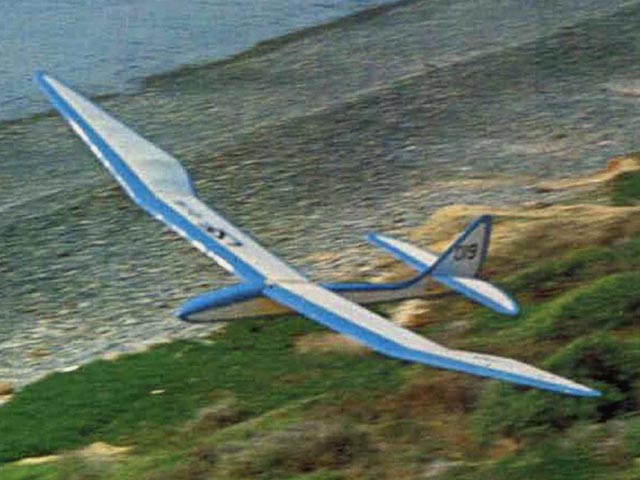