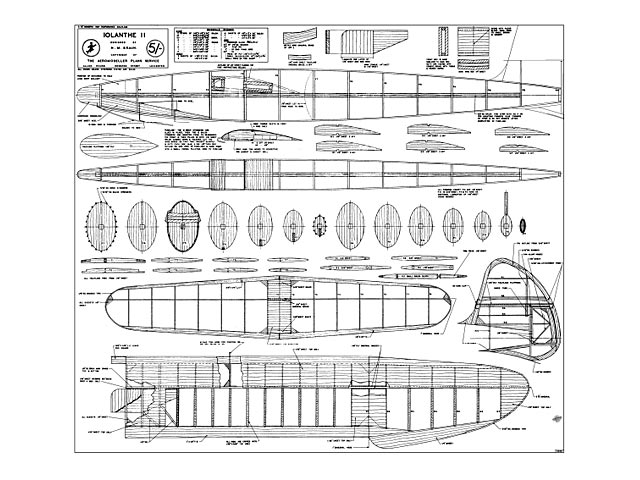 Quote: "Iolanthe I first flew in the Spring of 1945. I wanted to I design and build a model having a reliable and consistent all-weather performance. Furthermore it should possess pleasing lines coupled with straightforward and strong construction. In those days a six foot glider represented a major venture in my aeromodelling career, so I summed up all practical knowledge, and straining my matriculation mathematics to its limit drew up plans for Iolanthe I. Some two weeks later the model was completed and launched upon its maiden voyage. To my delight it flew straight off the drawing board, but little trimming being required.

This model had twin tow hooks and auto rudder control. The fuselage was sheet-covered on balsa formers but without a central boom.

Iolanthe II had a larger span with a corresponding higher aspect ratio. Twin tow hooks and auto rudder control were cut out, since the rudder could be set for a fantastically tight circle without any sign of towline instability.

The model flew away on its first day out from a hillside hand-launch; it was timed for seven minutes before the small red speck was finally lost to view amongst the woodland glory of the Mendips. Flights of seventy seconds were usual off a hundred foot line.

Building the model is simplicity itself, and if the following sequence of construction is carried out even a novice will be ensured of a correctly aligned model. In a job such as this, true assembly is more important than a first rate finish. Commence construction with the wings and wing boxes. When this unit is completed the formers are made and glued to the boom. It is advisable to use Durofix for all hardwood to balsa, and hardwood to hardwood joints. '

The fin is built and aligned with the fuselage which is now completed. The balsa. stringers are added` after the front half has been planked. Finally the tailplane is made, and used as a guide when the tail platform is glued to the fin. The upper fin completes the construction.

The drawings provide all other details. The model is double covered with the exception of the tail unit which is single covered. Two coats of glider dupe, with one coat on the tail unit, and on the original the fuselage and leading edges were painted red, using Nu-Brik.

The model will be found to possess pleasing glide characteris-tics, its descent being majestically slow and stable and if accurately built will reward its constructor with good and consistent flying." 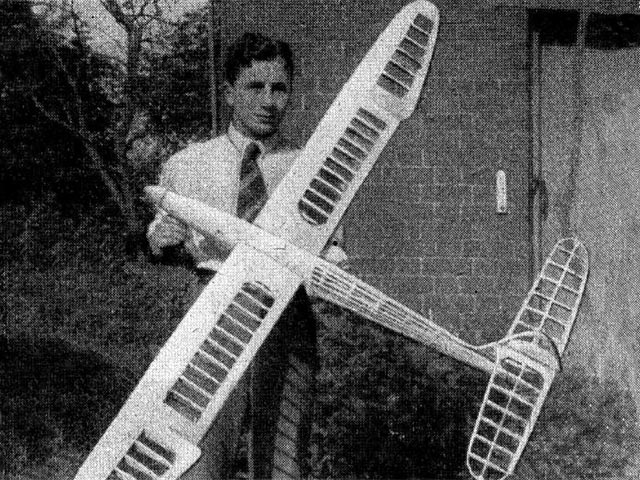