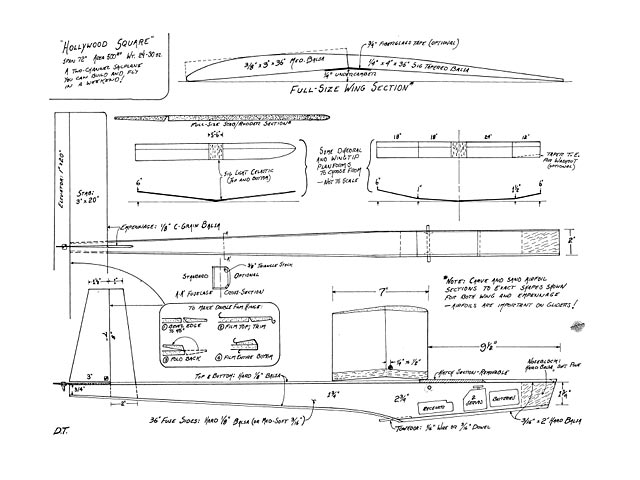 Quote: "Here's a six-foot, all-balsa R/C glider you can build in just one day - no full-size plans required. For thermal or slope soaring, or hang an .049 on the nose and make it a motorglider. Hollywood Square, by Dave Thornburg.

The Hollywood Square is meant to destroy some of the mystique of glider design. It won't win any big contests, beauty or otherwise, but it will get you into the air quickly. Six to ten hours of building time is about the most you can squander on the Square, unless you plan to Monokote her. That takes another three to four hours, and doubles the plane's cost. But it will also more than double her lifespan, and up her performance a few notches as well. The choice is yours.

WING Like all sailplanes, the Square's magic is in her wing. You build the wing from four sheets of balsa and two pieces of Sig Light Celastic. . . nothing more. By using Sig tapered-cut balsa for the trailing edges, most of the carving is done for you; all that's left is the rounding of the leading edge with a block plane or razor plane.

In fact, carving the airfoil is the only tricky step to building the Square, the only step that a rank beginner could possibly botch up. And even then, the plane would probably still fly!

If you're not really expert at selecting balsa, you might want to do as I do: use a set of scales to help you choose, espe-cially for the wing wood. An ideal sheet of 1/4 x 4 x 36 Sig Tapered Balsa weighs about 1.5 ounces. Don't buy it if it's much over two ounces. (They can weigh up to four!) The 3/8 x 3 leading edge sheets should weigh about three ounces each. This will give you a total wing weight (after carving and sanding and adding the Celastic) of between seven to ten ounces, without the optional Mono-kote.

Balancing the left and right panels is important. Try to select your wood so that neither panel outweighs the other by more than 3/4 ounce. You can always correct a bad imbalance on a completed wing by running a nail into the endgrain of the light panel, but no modeler likes to add dead weight to his plane, especially at the wingtip!

Last month's R/C Model Builder described the wing construction in detail. You can use white glue or slow-dry cyanoacrylate to join leading edge to trailing edge (hinge them with masking tape on the botton for a neat joint). But when it comes to dihedral and poly-hedral joints, use epoxy. These joints take a real beating, and nothing but epoxy will do. No need to use glass or Celastic on the polyhedral breaks, but don't try to skip it on the center break.

Is the fiberglass strapping tape necessary? I only use it on wings that will be launched by electric winch, and even then, I stop it about two inches outside the poly breaks. I add it, in a single piece, after all the epoxy joints are dry and just before applying the Celastic to the center joint.

Awright, suppose you live out in Speed, Kansas, and your local shop doesn't stock Sig Tapered Balsa? You have three choices. You can make your own, using regular 1/4 x 4 balsa and a razor plane. (This isn't so tough; I've done it dozens of times. Before I owned a good German block plane, I used to carve these wings with a No.64 X-Acto blade!) Your second choice is to write directly to SIG in Montezuma..." 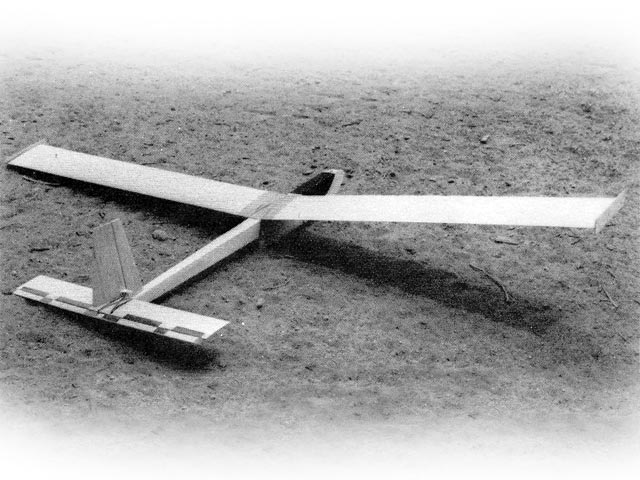 Sir/Madam: I believe there is some concept likeness to the Clod 9 (oz12261). This Holywood Square design appears to be more survivable on account of the hard balsa / soft pine block in the nose, however a black rubber block would look more professional as it would suggest the presence of some very needed terrain approach radar - and bounce better.
In my view both designs fail in the same points. Both lack proper full size plans with some small error readers may take exception to, nor are there any specifics on advisable nail sizes.
Miguel - 23/07/2020
Add a comment