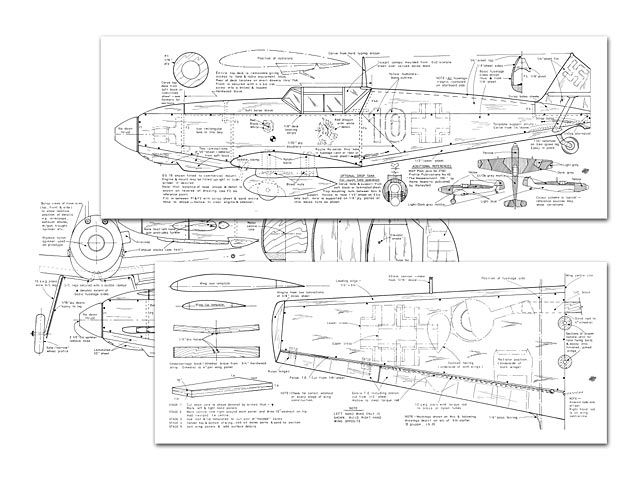 Note this plan and the Spitfire (oz12351) appeared together in the same "Dogfight Double" 3-part article starting in RCME, August 1977.

For the article download file, see the Spitfire (oz12351) listing.

Quote: "Let me state quite categorically that whilst not at all difficult to fly for the experienced low-wing pilot, the Spitfire and Me 109 - or indeed any model of this size and style - are not suitable for beginners. Despite this one feels that many will be built by those not yet experienced enough to handle them. To those people who persist in biting off more than they can chew: please seek experienced help before flying the model yourself. At the very least allow an experienced flyer to trim the model before 'having a go' yourself.

Messerschmitt 109e Construction: Those of you who have followed right through the Spitfire construction will not be surprised at the similarity between the two models (and incidentally the P51 Mustang and Hawker Hurricane built as part of the same exercise!) Probably the most noticeable difference being that the straight tapered wing on the Me 109 allows the foam wing cores to be cut in one piece rather than the two pieces required for the Spitfire. Beyond that no difficulty should be encountered in the wing construction which follows the general practice shown for the Spitfire. Check at each stage of wing construction that the 10° washout remains correct. Tissue cover the entire wing taking the same precautions as previously mentioned in the Spitfire construction notes.

When completely satisfied with the wing, the fuselage may be added. Note how the fuselage sides curve when viewed from the front, This curve is achieved by bonding the 'Mirralite' ply doublers to the fuselage sides with Evostik contact adhesive using a rolling motion. Assemble formers 3 and 4 to the fuselage sides and the top of the wing, using a slow setting adhesive such as PVA or aliphatic resin, check all round for squareness and leave to dry. The front and rear are pulled-in as with the Spitfire. The front end is built in exactly the same way, as for the Spitfire but the rear top deck is not rolled but formed from 3 pieces of flat sheet as shown on the drawing. Remember to fit the 'snake' for the elevator control and also the nylon tube to route the aerial through. The lower rear fuselage is carved from 1/2 in sheet and the tail wheel is added as shown.

Tailplane and Fin: Make up the fin, rudder, tailplane and elevators from 1/4 in sheet as with the Spitfire but take note of the grain direction on the lower part of the fin. This lower fin sits on a 1/8 balsa floor fitted between the fuselage sides and is faired in on each side with scrap balsa sheet. Join the elevators with 1/4 in dowel, or piano wire if preferred, and hinge to the tailplane with nylon or mylar strip. Tissue cover and dope all the tail parts. Fit the tailplane/elevator assembly to the top of the lower fin and check for alignment from both top and front view.

When completely dry add the upper fin and the tailplane support struts made from 1/4 in dowel (or 1/4 in sq spruce), sanded to section. Fair the ends of the struts with scrap balsa. Note that these struts are functional and add considerable strength to the tail assembly. Do not omit or replace them with anything of lesser strength. Gently ease the fin to allow the elevators to pivot freely and fit the rudder securely into place. Sand the airframe lightly all over and tissue cover the remainder of the fuselage. Mould as cockpit canopy tin the same way as detailed in the Spitfire instructions) and fit this into place.

Additionall details can now be added and the air scoop under the nose made from soft block or sheet. The radiators under each wing are from soft sheet as are the cannon blisters. The cannons are made from ',r6 in. dowel 'turned' in an electric drill. A similar constructional method was used for the cowl-mounted machine guns. The gun troughs were hollowed with a sanding drum driven by a Dremel flexidrive but could equally be taken out with an Exacto gouge. Note that the port machine gun protrudes further than the starboard. The exhaust stacks were carved from 1/4 x 1/2 in balsa with strips of 1/16 balsa top and bottom. Take care if using an inverted motor (or in some cases a side winder!) that the silencer does not obliterate the exhaust stack detail on one side thereby removing much of the 'character' or the model..." 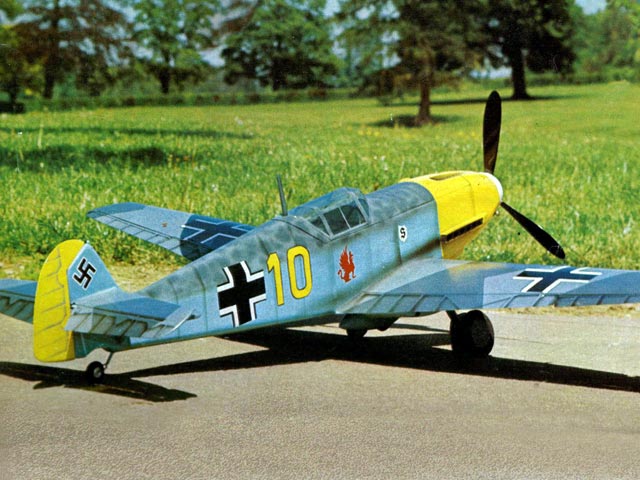