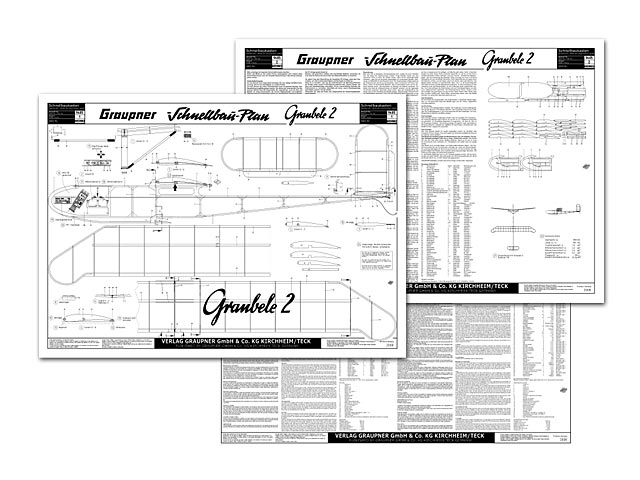 The original Graupner Graubele 2 (oz12343) was a free flight model first published in 1936. This here is the 2008 Graupner anniversary re-issue, for radio control. See http://wiki.rc-network.de/index.php/Grau... for more details on this.

Quote: "Introduction: The GRAUBELE 2 is a vintage-style RC model aircraft which harks back to the pioneering period of model building and flying. The original Graubele 2 was one of the first model aeroplanes to appear in the Graupner range of products. The plan for the design appeared way back in 1936; at this time balsa wood was not available as a building material, and - with very few exceptions - model aircraft were designed exclusively for free flight.

This new version of the GRAUBELE 2 can be built as a radio-controlled model, and as such can be fitted out with standard commercial radio control system components. The design of the original model is almost unchanged; the only modification is a slight increase in fuselage width (by a few millimetres) in order to make space for the receiving system components. The control functions are intended simply to provide minor directional corrections. Larger control surfaces would produce a more pronounced control response, but would spoil the inherent free-flight character of the model. A copy of the original plan from 1936 is included in the kit for your information.

RC system components (not included): For this model we recommend an FM radio control system such as the X-306 to mc-24. For more information on RC components please refer to the main GRAUPNER FS catalogue.

Building Instructions: Please read right through these building instructions before you start construction, so that you have a clear idea of the sequence of assembly. Note that certain components have to be prepared by gluing together two identical parts in order to achieve the appropriate thickness. Start each stage of construction by selecting the parts required, preparing them as necessary, and laying out the tools and adhesives you will need. All the major components are built directly over the appropriate area of the plan. To prevent the parts becoming stuck to the paper, cover the plan with clear plastic film beforehand. Keep the building board clean and uncluttered at all times. Use cyano-acrylate ('cyano') and activator ('kicker') for all joints. You will find it best to apply the glue to one side of the joint, then spray activator on the other face before joining the parts. Take great care to avoid excess adhesive getting onto your hands or the surfaces of the model: wipe off excess adhesive immediately using a paper towel. Cyano-acrylate glue is very strong, and this eliminates the need for wrapping joints with thread - except in the case of a small number of extremely highly stressed joints.

The fuselage: Pin down the fuselage nose (1), glue the top fuselage longeron (2) to it, then add the in-fill block (5) and the spruce strips (4) and (6). Use a fretsaw to cut the longerons to the length shown on the plan, finishing them off with a sanding block to bring them to the exact length. Pin down the longeron (6) on the building board, and glue the cross-braces (7) to (10) to the structure. Glue the blocks (11) and the lower fuselage strip (4) to the framework. Remove the fuselage from the building board and sand it overall before gluing the plywood panels (12) in place. Note: the tension in the lower fuselage longeron (3) will cause the tail end of the fuselage to curve down by a few millimetres, but this has no adverse effects. Use a balsa knife to remove the notches on both sides for the snake outer sleeves (53); as shown in section A-A. Cut the snake sleeves (53) to length, and fit them through the slots in the sheeting panels (12) from the rear. Glue the nose sheeting panel (13R) to the right-hand side of the fuselage.

Remove the standard cruciform output devices from the C131 servos and cut them down to the shape shown on the plan. Fix the servos in place using the retaining screws (20), as shown in the detail drawing View "B"; drill 1.5 mm dia pilot-holes for the screws beforehand. Connect the pre-formed end of the pushrods (59) to the servo output arms, slip the pushrods into the snake outers, and fit the output arms on the servos after setting them to centre from the transmitter. Caution: to avoid the risk of eye injuries, apply adhesive tape to the rear pushrod ends which now project from the end of the fuselage.

The left-hand sheeting panel (13L) can now be glued in place, taking care not to allow glue to get into the pushrod sleeves. Glue the prepared plywood blocks (14) to (17) in place, together with the skids (18). Sand the fuselage overall before gluing the plywood panels (23), (24) and (26) in place. Glue the two parts of the hatch cover (19) together, taking care to assemble it the right way round, and screw it in place. Assemble the fitting (21) from the two pieces of brass tube and the appropriate plywood parts, and wrap cotton thread (60) round it as shown; soak the wrapped thread in cyano to harden it. Glue the completed fitting in place, keeping it exactly central. The towhook (22) and the tailskid (50) should not be fitted until the fuselage has been covered. Prepare the support rails (32) and glue them in place, then drill the hole in the fuselage for the rudder linkage (58). Cut away the central channel in the rear mounting block (15). Sand the fuselage smooth overall once more, and round off all the edges. Cut the gussets (27) from cartridge paper, and glue them over the fuselage joints as shown on the plan.

The fin: First bevel the leading edge of the rudder (31), then cut the hinges (54) to the size shown and glue them in place before gluing the two halves of the rudder together. Drill a hole from the front of the rudder for the linkage (58), as shown in section C-C. Bend the top end of the rudder linkage (58) to the shape shown, and glue it in place. Ensure that the rudder hinges are not soaked in glue where they have to bend, otherwise they will be excessively stiff. Sand the joint surfaces of the aluminium tube fin tip (29). Cut the fin leading edge (28) to shape using the fretsaw, then assemble the fin as shown on the plan, using the ribs (30) and the tip (29). Check that the structure is perfectly flat and true before gluing the joints..." 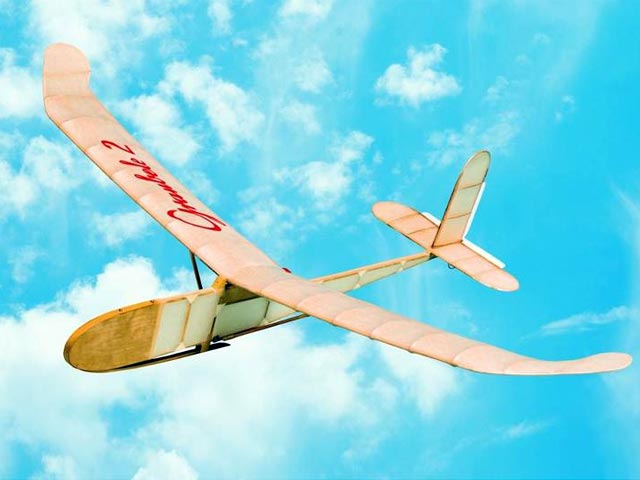