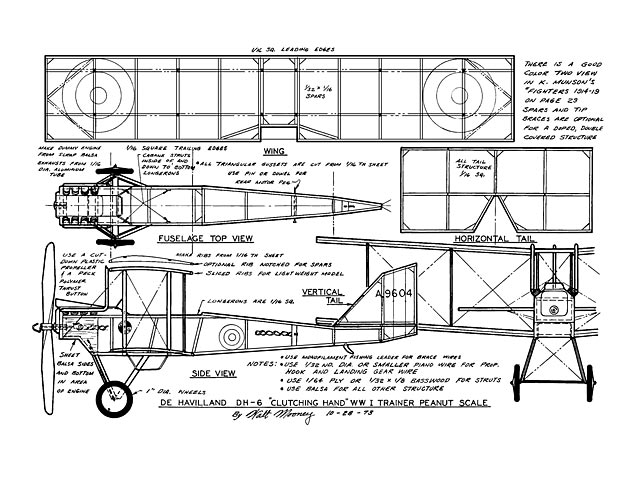 Quote: "Looking for a Peanut Scaler that's simple to build yet has that certain 'schmaltz?' If you haven't tried one yet, the 'Clutching Hand' is a perfect introduction to the greatest thing since 10 cent Megow kits!

This is a model of a WW I trainer and, as such, is probably not as romantic a choice as a fighter. However, the real plane had a reputation of being a very safe airplane to fly. In fact there were some who said it was 'too safe,' considering the much more dangerous vehicles that its students had to transition into. It came by the nickname by virtue of its highly under-cambered wing and its ability to hang on at very low airspeeds.

As a model configuration, it is most desirable because of its very simple shape. The model as drawn can be built as an outdoor peanut with the spars and tip strengthening diagonals, surfaces covered on both sides and all the wire bracing. The tissue can be shrunk and doped. Or you can build a very lightweight indoor peanut by eliminating the covering on the bottom of the wings and tail, omitting the spars and the diagonals, and refraining from shrinking and doping the tissue. In the photos, the light colored model is the indoor version capable of flying for more than 60 seconds, and the dark colored model is the outdoor version capable of about 40 seconds indoors and whatever the god of the thermals chooses to ordain outside. Both versions fly very nicely due, in part, to enlarged tail surfaces, which were discovered to be a necessary modification during outdoor tests of the darker model.

If you are a beginner at building peanut scales and have tended to avoid biplanes because of the complexity, I unhesitatingly recommend this DH.6 model for your first attempt at a biplane. Although the two bay wings, (two sets of struts on each side of the fuselage), look complicated, the actual wing installation is quite simple because the center section (cabane), struts are vertical and attached to the inside of the fuselage longerons. They are thus easy to locate properly, and can be cemented in place without it being necessary to have the upper wing in order to locate their upper ends. When the cabane struts are slanted, as they are on most biplanes, getting the upper wing in place correctly is usually the most difficult operation.

All the major structure of this model is balsawood. Model railroad basswood can be used for the spars, struts and landing gear members, if desired; otherwise, cut them, from a sheet of very hard 1/32 sheet balsa. The top of the engine cowl is made from 1/32 sheet, and the nose-block is made up of three pieces of 3/32 sheet. With the above noted exceptions, all other parts are 1/16 thick by the size shown on the plan. The landing gear wire and the tip skids are made of thin wire, as is the propeller hook.

The air scoop above the engine is card stock; the cylinders are cut down Williams Brothers small size plastic cylinders; a plastic propeller can be used; and for the lightweight model, especially, Hungerford wheels are ideal. A Peck Polymer nose plug was used.

The lightweight model was covered with lightweight tissue which had the insignia added before the covering was attached to the structure. The lightest weight insignia I could think of was to draw it on the tissue with a blue and a red pencil. The numbers were done with a black ball point pen. Simply lay the covering tissue over the plan and use the insignia outlines to guide you as you color them in. The center of the roundel is red and the outside circle is blue. The most forward tail stripe is red and the most aft one is blue.

The indoor model required one loop of 1/8 wide Sig contest rubber and, for the best flights, the loop was about sixteen inches long. Longer flights might be obtainable with a slightly longer motor because the 16 inch motor would completely run down while the model was ten or fifteen feet up. Indoor maximum durations can be obtained by sizing the loop so the model lands just as the last few turns unwind.

The outdoor version likes more power. A loop of 3/16 rubber is used. Here, maximum duration is achieved by means of flying into a thermal and by having the rising air extend the glide. Therefore, higher power to obtain the maximum altitude gain from the motor run is the name of the game.

Incidentally, the outdoor version was built by Douglas Mooney and was finished with red tissue and the license G-EARC on each fuselage side as a civil version flown after the war." 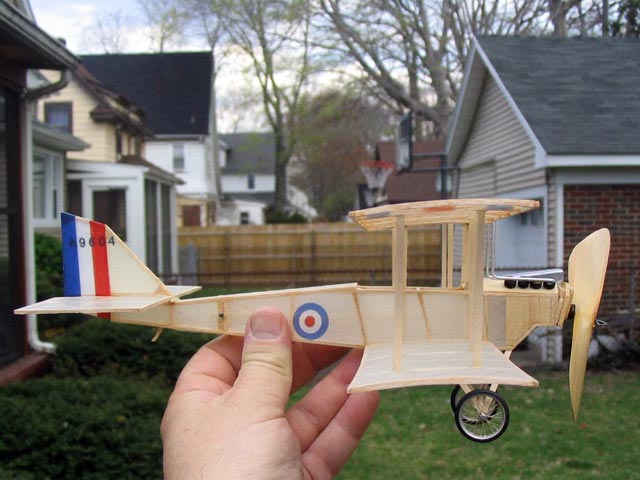