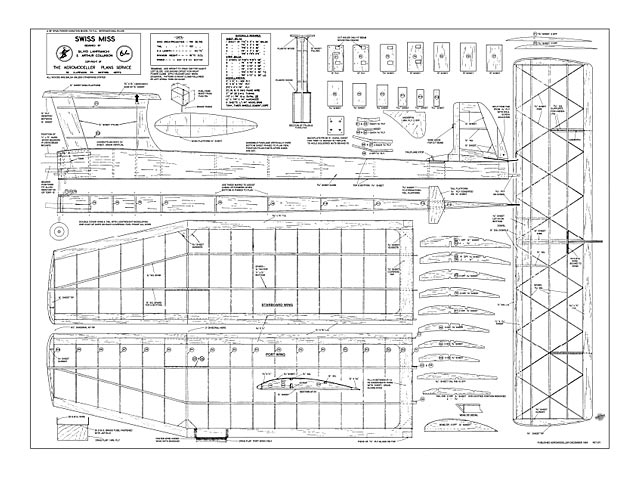 Quote: "Swiss Miss, by Arthur Collinson & Sylvio Lanfranchi. Out of seventeen contests entered in the 1954 season this design gained 12 Firsts, 2 Seconds (in the European and World Championships) and 2 Fifth places to make it the @Model of the Year'.

WHEN SILVIO LANFRANCHI returned home at Bradford after seeing the '53 World Power Cham-pionships at Cranfield, he was the wiser by close study of the American models, and the wealthier by virtue of a new K&B 15 engine obtained from one of the US team members. This combination led to an even greater than normal amount of restlessness in the Lanfranchi mansion, and Silvio's aeromodelling righthand man, Arthur Collinson was called in to draw up a World beater. The result was Swiss Miss, and how it came as close as a scant thirteen seconds to being a World beater is now common knowledge. Of the seventeen events in which it has flown this year, perhaps the three most outstanding were the team trials at Wittering, where Silvio won the Aeromodeller Gold Cup and topped the British team perform-ance; the European Championship at Brussels where he was only 41 seconds behind Emil Fresl, and finally the supreme performance at Long Island where it came so close to being '54 World Champ.

It could be said that originality is not its keynote : but what of that if performance is so high? Anyone who has built a San De Hogan (oz5350) could build an Eliminator (oz7680), and anyone who has built an Eliminator would have no trouble with the Swiss Miss. Structurally it is a tough design, an all-weather flier for British conditions with the optimum area for its 2.5 cc glowplug engine and sufficient inherent stability to make it child's play to trim. Normal flight pattern is a right spiral climb followed by a left glide turn obtained by the drag tab on the port wing.

Though designed as an FAI specification model, the docile trim of the prototypes led Arthur Collin-son to doubling up the cc's and fitting a Frog 500 for open contests. The rate of climb is naturally more than enhanced, and doubtless in '55 we shall be seeing and hearing a lot more of the high powered version, and not only from the Bradford quarter now that full-size copies of the 1/5th scale plan opposite are available from APS, price 6/- post free." 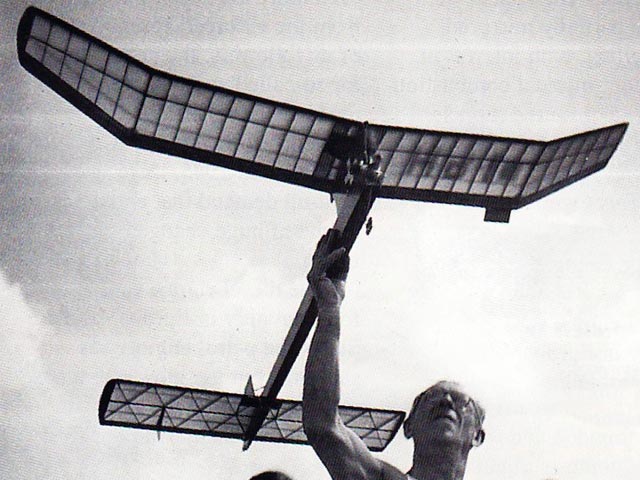