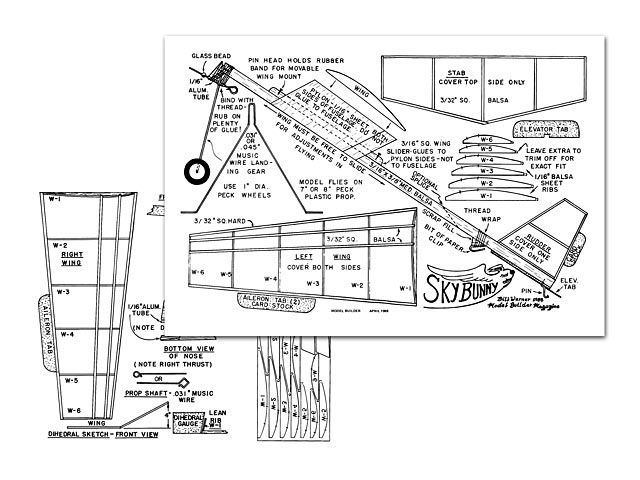 This plan and article appaered as port of the Model Builder magazine article series: "Hey Kid, Ya Wanna Build a Model Airplane?" in March 1988.

Quote: "Flatten your plan on the building board, cover with Saran Wrap, and make sure all the wrinkles are out.

Let's make a notching tool for those little cutout places in the ribs where the spars go on top of the wings. When you cut them out with a knife, they sometimes split and are not too accurate, so we're going to sand them in. Take a piece of the hardest balsa you have that is the same size as the notch you need, in this case 3/32-inch, and glue the edge onto a piece of about 100-grit garnet paper. You can glue some finer stuff on the other edge if you want to. As it doesn't take much longer to make six than one, why not make a few extras too?

Some modelers glue a strip of balsa on the side of the tool to stop it when it gets just a piece of the 3/32-inch square stringer alongside the business edge of the tool and gluing the stop piece right against it.

THREE WAYS TO GET THE SPAR NOTCHES LINED UP: Probably the best way to get 'em right is to pin the LE down to the plan ('X' the pins, of course), and then to glue the ribs to it in their proper positions. I use one or two pins shoved downward at an angle through the side of each rib to hold it in position, though some people 'X' pins on them, use little lead hunks of printer's type beside them, or just hope the glue will hold 'em! Then, sight down on the LE end of each rib and trim it off even with where the TE will go. (You did make 'em a little long as I showed on the plan; right?) Glue on the TE. Now, using the dihedral gauge you glued to some scrap balsa, lean the W-1 root rib inward to match the angle on the gauge. You will need to check this in a few minutes to make sure it has not moved! You can do something else while this is drying. When it is dry, line up a straightedge over the rib-notch locations and mark either the front or back of each notch. Then, saw your notching tool across each location until it is just the right depth to receive the spar. Check with a bit of 3/32-inch square to see that it fits just flush with the top of the rib. Then glue in the spars. They can hang over each end a bit and be trimmed off later.

The second way to make a wing is the one most used over the years by millions of modelers. That way involves making all the notches in the ribs first, and then assembling them, usually all out-of-line, with the spar snaking back and forth to connect them all. This is a rather clumsy way to do it, because then notches have to be lengthened to let the spar lie straight and then the unused part of the notch filled in with scrap.

The third way, which is a variation on the above method is to line all the ribs up on the spar, rather than using the LE as the guide. Then, the ends of the ribs can be trimmed as necessary to let the LE and the TE touch each one as you go like. I prefer the first, using the LE as a starting place, and a straightedge to line up the notches-to-be.

There are two ways to give up your wing. I prefer to get the glue in between the pieces being assembled. Some guys like to pin it all together and then wipe a little glue fillet (a drop with most of the extra scraped off) at each joint. Both ways work. In any case, use a piece of scrap stick to wipe glue into any small cracks, and always get rid of big gobs of glue; they add weight, look bad, and once they dry, are bears to sand or cut!

Before your wing dries, double check to make sure that all the ribs are down flat on the building board, that the LE and TE are touching each rib, and that the spars are all down in their little notches and not sticking part way up. Before we leave this, check to make sure that you have not bent the LE or TE out of line to make it fit up against any rib. Never allow bends, as they set up a stress in the wing..." 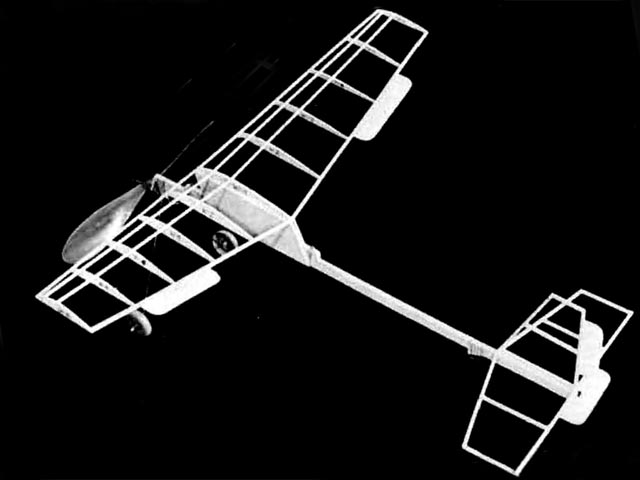